Wyatt’s new gig. Australia’s youngest MP is now Australia’s youngest former MP, with Wyatt Roy finally conceding over the weekend that he had lost the seat of Longman to Labor’s Susan Lamb. Roy spoke to Ms Tips’ colleague at StartUpSmart while packing up his office, reflecting on his time in Parliament and what comes next:

“‘I’ve been able to take a step back and have a look at everything I’ve achieved at 26,’ he says.

‘I’ve spent one in five days on Earth as a member of parliament, and I think I’ve changed my local community for the better and particularly in the innovation space we’ve started a very vital conversation for the future of the country.'”

The former assistant minister for innovation was a poster boy for the start-up sector, and Roy thinks he could get a job in the sector:

“’I’m looking forward to starting the next chapter of my life,’ Roy says.

“’It’s still early days but there are amazing opportunities for anyone that wants to be involved in the Australian innovation ecosystem. Perhaps I might find myself playing a different role in the private sector.’”

He wouldn’t be the first minister to move into the sector they were responsible for in government, Labor’s Martin Ferguson was minister for energy and resources and since resigning from Parliament has chaired the advisory board for the Australian Petroleum Production and Exploration Association. Former Liberal resources minister Ian Macfarlane is also in the box seat to become Queensland’s Resources Investment Commissioner, and former minister for small business Bruce Billson has taken up the role of executive chairman at the Franchise Council of Australia.

What things do you hate most? Senator Cory Bernardi’s conservative alternative to GetUp, Australian Conservatives, has sent its potential members its first email missive, asking for donations and guidance on what issues are most important to potential members. The email told readers: “We cannot allow the political left to keep eroding our values, undermining our culture and diminishing our important institutions. Their success needs to be countered and that means Australian Conservatives need to get organised.” The list of conservative priorities starts with “protecting marriage” and includes “less tax”, “constitutional monarchy” and “climate alarmism”. Health, education and national security are also on the list.

Bolt from the blue. News Corp columnist Andrew Bolt was spotted by a tipster on an early-morning flight from Melbourne to Adelaide on Sunday: “He must have offended Rupert somehow as he was back with the plebs in economy. His reading material: How Civilizations Die. According to the tipster he was back to Melbourne on a late afternoon flight on the same day. Perhaps he was preparing for his book launch in the city at the end of this month, hosted at Cory Bernardi’s Conservative Leadership Foundation headquarters.

Cameron’s swan song. Is this the most British thing ever? After finishing a press conference outside 10 Downing Street, outgoing British PM David Cameron sang a few notes before closing the front door, saying “right … good” and taking his microphone off. The “doo, doo, doo, doo” wasn’t familiar to Ms Tips, but it sounds like Cameron won’t miss facing the press outside his front door. 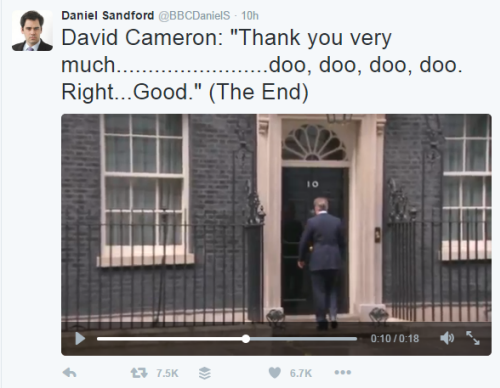 Classic FM has had a go at plotting just what notes Cameron was singing, and has given this analysis:

“So, Wagnerian fanfare, Beethoven-esque harmonic doubt and then a strange contemporary flourish at the end. Does this composition demonstrate the unresolved nature of Cameron’s swift departure from office? Is it perhaps a comment on what might be next for 10 Downing Street?”

All your data are belong to us. As Ms Tips’ colleagues explained yesterday, Pokemon Go is taking up the time, brain space and mobile data of people all over the world, addicted to catching Pokemon (small cartoon monsters) in their immediate surroundings. It’s now been revealed just how much data the app’s creators can gain from users, including full access to their Gmail accounts:

“As Google’s Accounts Help page says, ‘When you grant full account access, the application can see and modify nearly all information in your Google Account (but it can’t change your password, delete your account, or pay with Google Wallet on your behalf).’ This means Pokemon Go can read everything in your Gmail account and even send (or delete) emails as you, access (and edit and delete) all of your documents in Google drive, view all of your search history as well as all of your location history in Google Maps, and your browsing history in Chrome, access any photos you store in Google Photos (including private photos), access your Google Calendars and Contacts, and more!

“Moreover, this level of access is unusual. When a developer sets up the ‘Sign in with Google’ functionality they specify what level of access they want and best practice is to ask for the minimum amount of information required, usually just basic account information (name, email address, gender, and country).”

Niantic, the company behind the game has now released a statement saying the app accidentally asked for all that information, but would not use it:

“We recently discovered that the Pokemon GO account creation process on iOS erroneously requests full access permission for the user’s Google account. However, Pokemon GO only accesses basic Google profile information (specifically, your User ID and email address) and no other Google account information is or has been accessed or collected. Once we became aware of this error, we began working on a client-side fix to request permission for only basic Google profile information, in line with the data that we actually access.  Google has verified that no other information has been received or accessed by Pokemon GO or Niantic. Google will soon reduce Pokemon GO’s permission to only the basic profile data that Pokemon GO needs, and users do not need to take any actions themselves.”

Pokemon: gotta catch em all (and all your info)

Gigs? Look where Crean’s ended up.