Volunteers pick their race. Those who watched the election coverage closely on Saturday night might recall some Liberal luminaries early on were claiming Michelle Rowland in Greenway was a chance of being defeated. In fact Rowland picked up a 3.35% two-party preferred swing against the Liberals’ Yvonne Keane. Rowland famously had been expected to lose in 2013 until Liberal legend Jaymes Diaz produced one of the great election gaffes. Crikey hears from Keane supporters that on Saturday the party could barely muster one person to hand out how-to-vote cards at each polling booth. Meanwhile Liberal Craig Laundy, two seats closer in to Sydney in Reid, was awash with volunteers at every booth. Keane supporters are wondering what they had to do to get some help in a supposedly winnable seat.

Herbert ballots missing? We have heard that counting in the ultra-marginal seat of Herbert in far north Queensland has slowed to a snail’s pace after 177 informal ballots from one booth went missing.

Ms Tips has heard that the ballots weren’t in the box they were placed in on Saturday and cannot be found. A search of all the Senate ballot boxes could not locate the missing ballots, either.

Staff on the ground are unsure what to do, and counting in the seat that will be crucial for the Coalition to form a majority government has slowed as a result.

As of the last AEC report, Labor’s Cathy O’Toole leads over the sitting member, LNP’s MP Ewen Jones, by just 449 votes, with many expecting that postal votes would result in a narrow victory for Jones.

We’ve contacted the AEC to find out what has happened to the ballot papers and the count, and will update this story when we hear back.

Fairfax scribes with pens at 20 paces. While the political parties are conducting the post mortems of their political campaigns, members of the media are also scribbling up report cards of the campaign and considering whether they got it right. Fairfax’s Matthew Knott wrote a story asking if the press gallery had “got it wrong” and questioning if press gallery groupthink was to blame:

“Several ideas took hold quickly in the gallery’s collective brain. That Australians don’t kick out a first term government (despite this happening recently at a state level). And that Malcolm Turnbull’s personal popularity was a decisive advantage against the less prime ministerial Shorten.

“Many of us even convinced ourselves that the low-energy, small-target campaign was a clever way of ‘boring’ voters into backing the Coalition.”

Although including himself in the group that missed the signs, Knott has been in for criticism from press gallery colleagues, mostly through Twitter. But then there was this assessment in Mark Kenny’s column in today’s Fairfax papers, in which Kenny writes “election 2016, is notable for the self-appointed media experts who, in an ironic example of premature conclusion drawing — their key complaint about professional pundits — have loudly condemned the ‘MSM’ for accurately reporting public surveys, and for suggesting a Turnbull win was the more likely result. It turned out it was.” 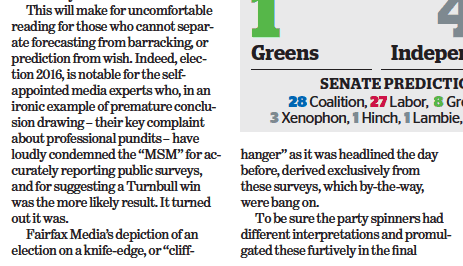 A train needs a name. As if Boaty McBoatface weren’t enough of a lesson for all levels of government, the Victorian government has decided that it, too, needs to get some public involvement in naming the five new train stations that will exist after the completion of the Melbourne Metro Rail. Although the project, which is set to build a new train line linking Caulfield in the east with Footscray in the west, is not due for completion for 10 years, the government is getting on the front foot (or perhaps just needs an easy PR win), asking for contributions from the public. Melbourne University vice-chancellor Glyn Davis has already suggested that the station that will service the campus be called “University” station, which is very original.

Ms Tips understands that Davis once wanted the whole line to be called the “University line” because it links Monash, Melbourne and Victoria universities. The Herald Sun has had some helpful suggestions, like “Shinboner” for the station on Arden Street in North Melbourne, after the Shinboner spirit the North Melbourne football team is famous for. We are just hoping for “Stationy McStationface” or “Trainy McTrainface” — you know it makes sense.

We’re a happy team at Liberal HQ. While the Coalition is yet to officially have the numbers to form government, they are well placed to gain a slim majority in the House of Representatives and Industry Minister Christopher Pyne has claimed the win:

“You would have to say that we are an election-winning machine in the Liberal Party. Labor has won one election out of the last eight and there has been one hung parliament.”

“The truth is Labor lost the election; the Liberal Party won it; it’s our sixth victory out of the last eight; we are the Hawthorn of Australian politics.”

We’re sure that former Liberal Victorian premier and former Hawthorn football club president Jeff Kennett loves the analogy. Ms Tips could suggest other similarities between Hawthorn and the Liberals, but it would just be seen as a cheap shot by a fan whose team has experienced less recent success as Hawthorn. Pyne’s theory also holds some weight because 2010 — the year of the hung parliament — was also the year of the drawn grand final between Collingwood and St Kilda, in which fans had to sit through a replay grand final to determine the winner (after then PM Julia Gillard had said that was exactly what the public didn’t need). That drawn game has been set to music and will be performed by the Melbourne Symphony Orchestra at Hamer Hall in September. Perhaps we’ll also get a musical version of that term of government as well?

I would just like to point out that my comment after a William Bowe article suggested that journalists have no idea about numbers, have assumed a binary poll position knowing that independents and NXT candidates made it much more complex than that, and that optimism for a LNP win was unfounded based on the numbers.

So crow on that one journalists, and feel free to ask me to interpret any future numbers for you. It is my job, interpreting numbers, that is.

Premature ejaculation by much of our supercilious MSM – a habit – they’ve been at it so long they can’t see beyond their own personal opinions?
One, Atkins – “LNP 85 seats”?

I hope that Glyn Davis’ push for the station to be named University is successful, because it has the virtue of conveying to passengers/travellers what is above the ground. However, I’m pessimimistic.
When the Melbourne Museum relocated to the Carlton Gardens, obliging the renaming of the underground station previously known as Museum, commercial imperatives won out, with the name Melbourne Central, in spite of a proposal that it be called RMIT, the institution adjacent. Although Melbourne Central shopping centre is immediately above the underground station, it is in fact the northern limit of the CBD, so it is scarcely even an accurate descriptive.