Melbourne Man is a fictitious creation of Sam Hains and journalist Tara Kenny, who didn't tell her editors or Age reporters he was made up.

Remember that ridiculous Melbourne Man vox pop? It was featured in The Age’s Street Seen section, then splashed on The Age’s front page after it went viral courtesy of answers like “I spend a lot of time down at the docks and source inspiration from the architecture”. It turns out the whole thing was a hoax — cooked up with the journalist. Tara Kenny, the freelance photographer and journalist who did the section, says she never intended to deceive her editors, the wider media or the general public, and “only ever wanted to give people a bit of comic relief in this crazy, messed up world”. 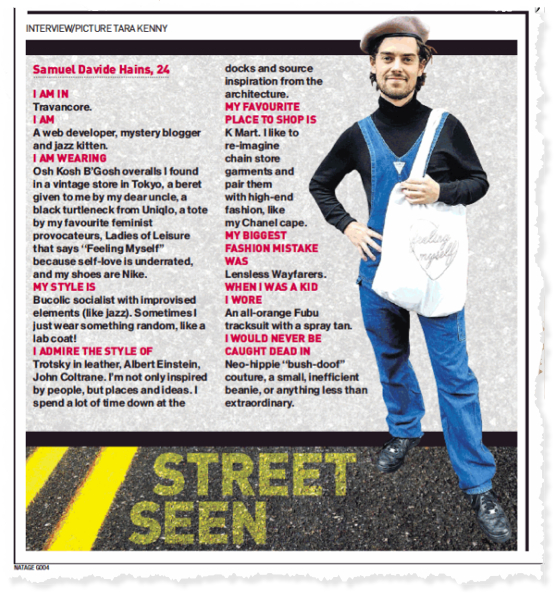 The guy behind the persona, Sam Hains, told Vice the whole thing was a spur-of-the-moment joke cooked up with his friend, Kenny, who was filling in on Street Seen for The Age. It wasn’t even the first time she’d gotten a friend to dress up in ridiculous clothing for the section, Hains said — his friend Maillie, in the paper as “Molly Eliza Halloran”, had done the same thing.

“Street Seen seemed like a great platform for performance, given the fact that the subject is represented as their authentic self, caught on the street. I felt I could experiment with the reader’s willingness to engage with me as an ‘unstaged,’ ‘natural’ character.

“Davide is not a person, but he is a persona — there are elements of my authentic self in Davide. Once we had the outfit together, Tara asked me the questions, and I just said the first thing that came into my head. I was just trying to be funny.”

It’s hard to think The Age would have put Hains on its front page had it been in on the joke. Age journalists Melissa Singer and Beau Donelly wrote the front-page article about the sensation, in which they seemed sceptical of Hains’ authenticity:

“The world has gone crazy for our hyperhipster — but is he just having us on? Is this the most Melbourne guy ever? Hipster or hero? Fashion icon or phoney?”

Singer and Donelly asked Kenny about her subject, and she told them Hains was “magnetic”:

“[Kenny] said she tried not to laugh at his responses ‘because he was so earnest and genuine. I’ve met some real odd bods doing ‘Street Seen’ but he’s certainly in a league of his own.'”

Hains, the piece said, didn’t respond to a request for an interview.

We asked Kenny whether her editors at The Age knew Hains was just a friend of hers who dressed up for comic effect, whether the paper is unhappy about her fake Street Seen characters now, and whether this is all some elaborate protest against the construction inherent in columns such as Street Scene.

In a statement sent to Crikey, she corroborated much of Hains’ account.

Kenny said she had never intended to deceive or “troll” her editors, and had only been writing the column for two weeks while its regular writer was away.

“I approached Sam because he wears good outfits and is hilarious — the one thing that has become abundantly clear from all this ‘viral’ madness — and I wanted to share that. He agreed on the condition that he would appear as an exaggerated caricature. While the column is meant to feature real people spotted organically on the street, it is an inherently playful read that is meant to be entertaining, hence I felt comfortable exercising a level of artistic licence.

“I understand that there are journalistic principles of integrity that need to be adhered to, but personally see a rather significant distinction between making up content for hard news stories and exaggerating a character for a street fashion column.”

As for her interview with The Age‘s Melissa Singer, she said she’d been under the impression it was a “tongue in cheek exchange, but am truly sorry if my actions have had negative repercussions for her.”

“I think it’s a really cute column and only ever wanted to give people a bit of comic relief in this crazy, messed up world. I hope this doesn’t ruin my career, but if it does at least it’s still the funniest and weirdest thing that has ever happened to me. If any other media outlet wants me to write a comedic street fashion column or tell all memoir I am available.”

She also explained why Hains made a reference to his “favourite feminist provocateurs, Ladies of Leisure”. That is the name of an online magazine Kenny edits. She says Fairfax has told her they “no longer require her services.”

“We always suspected some of the comments were tongue in cheek – after all, who wears dungarees backwards and pairs their K-Mart purchases with a chanel cape? Street Seen has always involved a lighter look at Melbourne fashion …

“What is not acceptable, however, is that the journalist concocted the plan with her friend and then lied to one of our reporters about her relationship with Hains. Fairfax Media expects all journalists to report truthfully and fairly on all subjects in all sections.

“Kenny will not be doing any work for Fairfax Media in the future and this week’s Street Seen in M Magazine has been scrapped.”

Meanwhile, The Age is still drawing all it can from the vox pop — its front page this morning links to a think piece by freelance writer Madeline White, who compares the reaction to Hains to that surrounding the Vanity Fair interview with Margot Robbie, to ponder which is a more true reflection of Australia’s national identity.

So lets clarify for a non-Melbournite. People thought that was serious????

The dead tree press continues to eat itself – Ouroboros it ain’t.