Give us time, say bookies. The polling was roughly on the mark, but how’d the betting markets deal with the federal election? Yesterday’s Oz concluded: not very well. A piece by Jared Owens yesterday concluded that Sportsbet was on track to lose “half of the 18 predictions it exposed to the media on election day”.

Not so fast, says Sportsbet. The betting firm’s Ben Bulmer told Crikey it had run more than 200 markets for the federal election, of which the biggest by far was the one predicting the Coalition would be sworn in (that market’s still open, and still favouring the Coalition). As for lots of the markets where Sportsbet tightened the odds in the days up to the election, betting odds should be understood as reflecting the likelihood of events. For example in Batman, Owens writes the odds on the Greens challenger narrowed close to election day, but incumbent David Feeney had odds of $1.10 — suggesting the bookie expected him to win but thought it would be a close race.

As Crikey explained last month, betting odds on individual seats are arrived at by an election trader who subjectively picks odds to the best of their ability. The odds are then adjusted depending on which way the punters are biting.

National Lampoon’s Vacation. So where has Alan Jones been since arguing with James McGrath over who is the captain or king of the bedwetters? According to Mark Latham, who filled in for the broadcaster on Sky News last night, Jones is on a little trip north (and it didn’t sound like he was joking):

“And as for Alan Jones he’s off in Alaska bear hunting with Todd and Sarah Palin missing all this fun about — all this excitement about the possibility of a hung parliament as the results come in, so I’m sure Alan’s tuning in now as his cruise ship is heading to Anchorage or wherever he’s got to day.”

Alan Jones and Sarah Palin going bear hunting, gazing across at Russia? We can only imagine. Now we just hope that we get an invite to Jones’ slide night when he gets back.

Hastie to attack the boss. While conservative commentators are raking over Malcolm Turnbull’s campaign failures, few of his colleagues have been keen to take a swing, especially with the election result still hanging the balance. Not Andrew Hastie though, the member for Canning who was preselected before last year’s byelection in the seat and moved straight into the conservative fold of the Liberal Party. Hastie spoke to his local paper, the Mandurah Mail, and put in his two cents (and a bit extra) on Turnbull’s campaign failures:

“He said he threw aside the national campaign’s talking points when a father ‘asked me directly why our plan would benefit the future of his five children’.

‘It was at that point I realised that a lot of what we were campaigning on nationally just wasn’t resonating with everyday Australians.

‘He couldn’t understand the reason for company tax cuts, he wasn’t earning enough to benefit from the increased tax thresholds and he wasn’t an innovator – he was just an everyday Australian who was trying to pay down his mortgage and look after his children and ensure they had a brighter future.'”

Tell us what you really think.

Dirty laundry out in the open? Speaking of post-election soul searching, the Greens are also wondering what went wrong after the party failed to secure a second lower house seat and appears to be going backwards in the Senate, with a loss of one spot in South Australia and the possibility of losing a spot in Victoria and one in Western Australia. In a piece on The Guardian yesterday, former Greens staffer and ex-candidate Osman Faruqi wrote about the party’s shortcomings this election and was met with criticism on Twitter from NSW Greens MP Jeremy Buckingham, who accused Faruqi of unfairly blaming Greens leader Richard Di Natale and not laying the blame elsewhere. 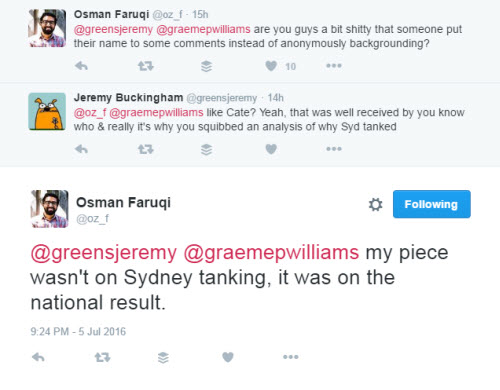 The piece didn’t call for sackings, but it seems to have stoked enough resentment to bring arguments about party strategy into the public sphere — something incredibly rare for the Greens, who are loath to brief journos about internal party matters, unlike their Liberal and Labor colleagues.

An insider’s guide to political betting

Greens…when you lie down with dogs (L/NP senate deal..that went well didn’t it???), you wake up with fleas (instead of votes)!!
Should be easy enough to work out…even for those with half a brain like the drongos who support you!!!