Kohler's at it again. And other media tidbits of the day.

Kohler’s at it again. How did Alan Kohler get out of his non-compete clause? The finance guru is starting yet another publication, after selling Eureka Report and Business Spectator to News Corp. News Corp subsequently sold Eureka Report on, which is why he was able to do it, he said on Twitter today. “See the thing is my non-compete was with News and they sold Eureka, so it no longer applies,” he said, in response to occasional Crikey writer Jason Murphy musing on how he’d be sure to draft a solid non-compete if he ever bought out Kohler.

The website for The Constant Investor is up, and will be unlocked for $25 a month once it launches. It’ll also have no ads, Kohler told Mumbrella. “My view is you have to decide what business you’re in: subscriptions or advertising. It’s very difficult to do both,” he said. — Myriam Robin

You’ve been warned, Murdoch. The proposed merger between Sky TV and Vodafone New Zealand was greenlighted in Auckland this morning by Sky shareholders. Peter Macourt is a former No. 2 at News Corp Australia and is a former director of Foxtel, which is 50% owned by News Corp. He is currently chairman of Sky TV in New Zealand, which used to be 43% owned by News until it sold out in early 2013 ahead of the split in the family empire in June of that year. In other words he is a “safe pair of hands” so far as the Murdochs are concerned. Macourt has been the prime driver in the proposed merger of the company with Vodafone NZ.

Addressing that meeting Macourt said the company had no option but to merge because of the weak outlook for pay TV — a warning that ought to be heeded at Foxtel in Australia and at News as both move towards a massive shake-up of the Murdoch’s Australian pay-TV assets (which also include Fox Sports). Macourt told shareholders the pay-TV industry was “at a crossroads” with the internet having permanently changed the way people consumed media and entertainment services. — Glenn Dyer

Front page of the day. A lot of things happened yesterday. The Juno orbiter got an up-close look at Jupiter. Australia still has no government, and the Nationals are turning on their Coalition partners. The Liberal Party is falling apart, with Malcolm Turnbull’s leadership under grave threat. There was a deadly terror attack in Baghdad. Hillary Clinton will not be prosecuted for her emails. And this is what The Age thinks is worthy of the front page: a self-styled “jazz kitten” with a dislike for small hats. 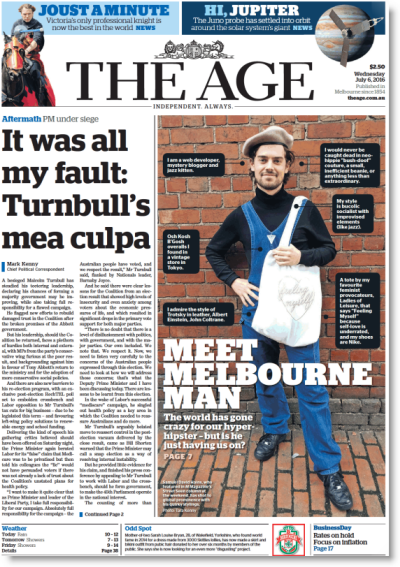 The front page of The Age pretty well sums up why no one is buying it.
Hard to see it lasting beyond 2016 as a newsprint artifact.

Was going to say the same thing, Paddy. I should be an Age reader: I’ve just moved to Melbourne, I work in the print media and prefer reading articles in print to online (The Saturday Paper, for example), I’m progressive-leaning and I despise The Australian and the Herald-Sun. Yet between this type pf crap and the Streaming TV front page ad covers run by The Age, I feel no incentive to buy it. RIP.