About a quarter of Australians would prefer a Greens-Labor-independent minority government, while one in five think we should go back to the polls.

Nearly one in four voters would prefer a Labor-Greens-independents coalition in the event of a minority government, while one in five want a new election, today’s Essential Report shows.

And after a campaign strongly focused on Medicare, the top priority for the new government, according to voters, is investing more in hospitals and health services: 45% of voters say that should be the top priority for whoever forms government; 26% say invest more in education, and 22% say cut spending and the deficit. Even 38% of Coalition voters say health should be a priority, eight points lower than cutting spending; “ensuring big businesses pay their fair share of tax” is a priority for 22% of all voters, and unlike other priorities is far more consistent across different voting intentions (25% for Labor voters, 19% for Liberal voters, 18% for Greens voters). Same-sex marriage is a priority for 15% of voters, but 36% of Greens voters. 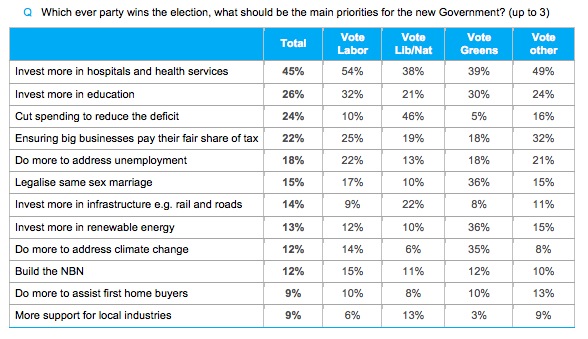 On voting intention (the poll was taken between last Wednesday and yesterday), it seems the Coalition rise last week faltered on the eve of the election. The Coalition is on 41%, Labor on 37% and the Greens on 10% for a two-party preferred outcome of — you guessed it — 50%-50%.

I could argue that the election was ultimately a choice between respect for money and respect for people. Result: unclear

The similarity of Lib & Lab voters (27/38) in eschewing an alliance with the Greens shows how far this country still needs to evolve.
I looked & looked for a proportion of tax payers wanting to prop up the mass slaughter industries of France & the USA but found no mention.
Now THAT I would like to see being a topic for an election.

What guarantee is there that we’d get a different outcome if we had another election?
Will we have to keep going back til we get it Right?

No one wants the Greens because this election season showed us–both in the questions the media chose to put and the policies the major parties chose to spruik– that climate change is a non-starter. (And why is this, we wonder?) The only leader that went to the Barrier Reef was Di Natale. Fewer people in your poll were concerned about climate change than they were about legalising same-sex marriage. (And why is this, we wonder?)

And f course no one gives a stuff about conditions in he concentration camp islands that lead 6 children to attempt suicide. The Greens the only party to offer a solution to torture vs the people smugglers

The five options in that first question are not the only five options
– Minority govt incl *both* the Greens and NXT
– Minority govt without any deal with any crossbenchers – the Liberals can just recall parliament, and as long as they pass supply and survive the inevitable motion of no confidence, they can continue governing without making any formal deal (though they will have to negotiate on every bill and every vote). In theory Labor could also govern without a deal, though they would have to bring on a successful motion of no confidence first – the Liberals won’t just hand it to them.
– German-style Grand Coalition. (yeah, I know that won’t happen)