Did voters really kick out Turnbull supporters? The Australian has reported that many MPs who supported Malcolm Turnbull in last year’s leadership spill have lost their seats, suggesting that voters had turned on the likes of Peter Hendy, Wyatt Roy and Fiona Scott because they had deserted Tony Abbott. It’s an interesting line to run, considering the number of Liberal MPs who have lost their seats includes Abbott backers Andrew Nikolic, Jamie Briggs and even two of the women considered part of “Tony’s Angels” — Karen McNamara and Natasha Griggs. As the list of Liberal MPs to lose their seats is confirmed over the next few days, the theory may continue to struggle to hold up.

A pesty problem for mandarins. A tipster in the Victorian government’s State Revenue Office tells us the staff are battling a tiny enemy that is having a big impact:

“There is a HUGE mice problem at the office of State Revenue Office 121 Exhibition St Melbourne. This has been evident to management for at least past 8 weeks but management’s response has been too laugh it off and say its a building-wide problem and there is a mice plague across the CBD.

“This doesn’t make it any easier for staff who feel the workplace has become unsafe. Today a nest of baby mice were discovered in one staff members drawers — the fourth time similar discovery has happened in the past month. Cleaners remove the cabinet but it was otherwise shrugged off even though many staff in surrounding parts of office are disgusted by how big the problem has become. The only message from management has been to accept there is some mice activity which has been observed but that whilst people keep food in their cupboards, you should expect mice.

“Yet that is not good enough. Most office workers would store small amounts of packaged food at their desks but would not expect to have mice running all over the place. A big OHS issue that management are too lazy or incapable to deal with.”

We’ve asked the State Revenue Office about the issue but have not heard back. For the record, the Crikey bunker, at the other end of Melbourne CBD, is so far rodent-free.

Snack pack democracy. Now that Pauline Hanson is back on the political scene, there is much debate on how best to engage with her and her ideas. Labor Senator Sam Dastyari has already tried extending the olive branch, inviting Hanson to Sydney to share a halal snack pack, a meal that has gained a cult-like following in the past six months due to a Facebook group — the Halal Snack Pack Appreciation Society. Hanson rejected the offer, although a petition has been started to encourage her to share the meal with Dastyari. The halal snack pack phenomenon has been unpacked by foodie website Broadsheet:

“To break it down for first-timers: the HSP is simply layers of hot chips, kebab meat (chicken and/or lamb) and cheese, covered in sauce. Most sauces are okay, although three together — particularly garlic, chilli and barbeque in a perfect criss-cross — is considered the Holy Trinity.”

But there are rules for HSPs — no pork (obviously), no tomato sauce — asking for those things on a HSP would garner the insult of being a “haram dingo” in the Facebook group, which is the inspiration for this artwork of Hanson that appeared in the group last night: 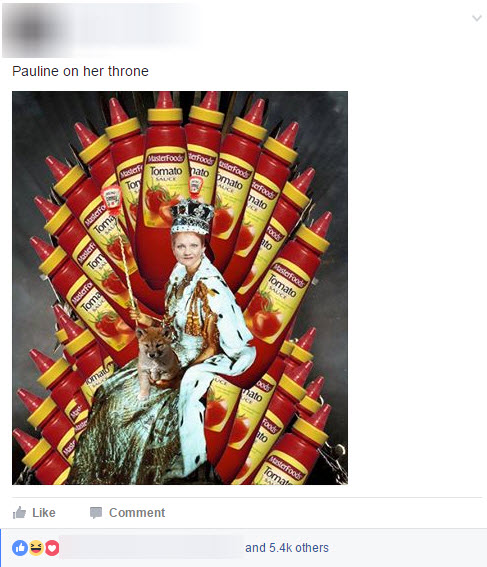 A patriot front. Many conservative MPs are angry at the involvement of GetUp at this election, believing that the lobby group has overstepped its role and had too much influence, with outgoing Liberal MP Andrew Nikolic blaming the group for his loss of the seat of Bass. Senator Eric Abetz has called for a review into charitable groups that get involved in elections, except that as GetUp is not a listed charity, he may find that his review won’t get the results that he wants.

Christensen, who held onto his seat of Dawson despite concerted campaigning from GetUp, has put the call out for a new rival to the group — just a conservative version. In a Facebook post, he said: “Expressions of interest are sought by those interested in financing and forming a patriotic, conservative alternative to GetUp! If we do nothing, we will let the forces of socialism and globalism conquer.” 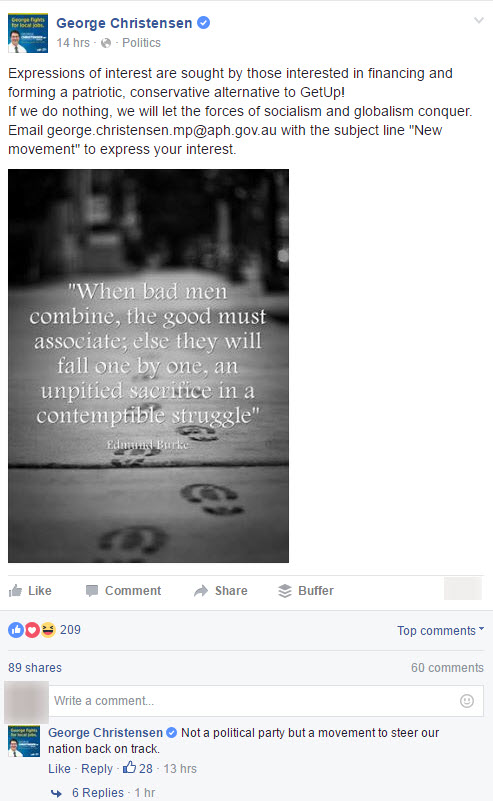 He has assured his followers that it wouldn’t be a political party, but a movement “to steer our nation back on track”. Christensen announced that he was looking for contributors for his new “War on Radical Islam” website in February, but there seems to be little movement on that front. While Ms Tips will not contribute to the group, we’re helpful types and have a few ideas for names. We like “Stagnation!” (the exclamation will get the kids in) or “Sit Down, We’re Just Fine”. One colleague suggested “Duck and Cover” and another “Rise Up”, but that one is already taken.

I suspect that the far right already has an organization that is a rival to GetUp. It’s called News Ltd.

I would have thought unChristainsen would go for something like FUWF – aka please go away We’re Full.

Looking at the size of Christiansen, I doubt if he ever thinks that he’s full.

As you say, there’s been a rival to GetUp for decades – in the form of Rupert’s Limited News, devoted to the dissemination of “entertaining” unbalanced gossip and misinformation – by a kennel of paid one-eyed professionals.
“Gillard’s Lie”? Compared to the myriad Limited News Party’s – especially from that doyen of deception and “lying rodent”, “Honest John” Howard?
After Rudd won – how long was it before Rudd’s lunch(?) with Brian Burke became a national scandal, then it was those “tantrums on a plane” – peaking at Utegate? Steve Lewis, can take a bow over that along with Eric Abetz and Malcolm Turnbull – that wasn’t all Grech?
The basis for “Faux Tradie’s” tirade = “The Australian”?
Don’t they hate it when someone starts doing to them what they think they have every Right to do to others?
Again – an ill-informed electorate deserve an ill-informed parliament – without a double dissolution Hanson would have been just another foot-note to just another election.

Though if you’re looking for a name, for an organization whose purpose is to rival GetUp and which is bound to be comprised largely of bitter, twisted and aging men; then surely it should be, Can’tGetUp.

Sometimes I really don’t know how to react to some of the precious complaints from the entitled classes. Sure it should be fixed, but if it’s worrying you that much, spend a few bucks on a mouse trap and pop it in the cupboard.

The State Revenue Office should take some dollars from petty cash & rescue a couple of desexed cats from the RSPCA. The office will boast a couple of mascots & reduced mice. Or will they request a committee solve the problem & ultimately blast the premises with chemicals? We know which option they’ll take.

A “HUGE mice” problem? How big are these rodents?
Are they the result of some experiment gone wrong as in Russell Braddon’s much neglected dystopian classic, “Year of the Angry Rabbit”?