No, Donald Trump, that star you put over an image of money is not a "sheriff's star". 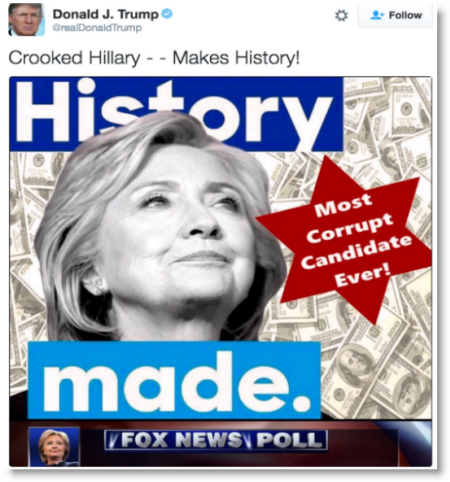 That star, there’s something about that star … From Wikipedia:

“The Star of David … is a generally recognized symbol of modern Jewish identity and Judaism. Its shape is that of a hexagram, the compound of two equilateral triangles.”

Oh, that’s right. We knew there was something familiar. Donald Trump is linking Hillary Clinton with corruption, money and Jews. That’s what we call anti-Semitism, and much as Trump later tried to claim the star was “a sheriff’s star”, it came from a white supremacist Twitter account. Taken with the rise of Pauline Hanson and a strong undercurrent of racism in the Brexit vote, racism and anti-Semitism are taking hold in mainstream politics in the West. We have to read the warning signs before it is too late.

Just because someone is an ignorant bigot, does that make them a bad person, Senator Brandis?

The mainstream political conversation in all these countries, including ours, is already pretty damn racist. With horrible results. This is driven by the major parties in all these countries. Are we to honestly believe that Trump, Farange or Hanson is the source of racism? That if we just reject these people we will have prevented the rise of racism? Does racism work like vampirism, you put a stake through the original vampire and it’s all over?

Yes, people took too long in the thirties and refugees were refuse entry until it was practically too late. A report on the views of Hanson’s political advisor, who thinks that a “cabal of international bankers” have organised every crisis since 1913″ strongly suggests that Hanson is advised by an undeclared neo-Nazi. While the state of Israel’s treatment of Palestinians has some similarities to the Nazi’s treatment of Jews in Poland before the “final solution” years, this only justifies criticism of the state of Israel, leaving untouched the demand that we condemn anti-semitism as strongly as ever. Part of the process is to make sure that we do not allow racists and oppressive bigots to enjoy free speech at the expense of the security of the vulnerable in Australia.

“Before it’s too late”?
That horse bolted so long ago the hoof prints have washed away.

If Hanson was a member of the Liberal Party (like Bernardi) would there be this level of consternation over her opinions?

No. The Liberal Party has made racism respectable in Australia.