A freedom of information request to find out how much the Department of Immigration paid Save the Children in compensation has resulted in 10 completely black pages.

The Department of Immigration and Border Protection has said that the amount it paid to charity Save the Children in compensation for false allegations directed at the organisation over its work in the Nauru detention centre is so secret, only a few within the department know the actual amount, and it’s on a “need-to-know” basis.

The government removed nine workers from the Save the Children organisation from the Nauru detention centre in October last year alleging at the time that staff were encouraging asylum seekers to self-harm and orchestrating protest activity in the detention centre. Then-immigration minister Scott Morrison initiated an independent review into the allegations, and the resulting report found that the department lacked sufficient evidence to warrant their removal.

In May, the department and Save the Children reached a confidential agreement including a financial settlement, and the department acknowledged that the allegations “may have led … members of the public to question the integrity of SCA” and “it had no reason to cause doubt to be case on SCA’s reputation”.

Crikey filed an FOI request for the agreement in May, and on Monday the department released the 11-page deed of release and indemnity between the department and Save the Children. However, all but the cover page are completely blacked out and redacted. 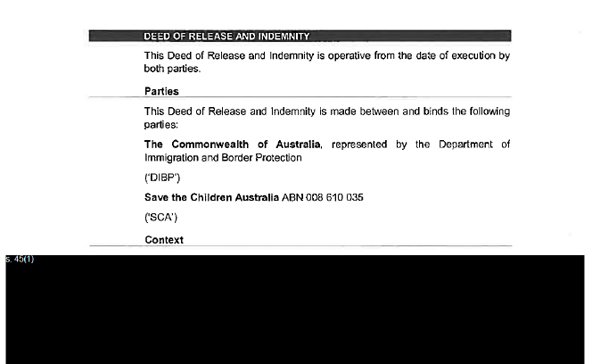 In the accompanying decision, the department’s FOI decision-maker, Geoff Hill, argued that the release of the document in full would be a “breach of confidence”, and indicated the department was so worried about the amount being paid for the slur against Save the Children that Immigration was keeping the agreement under close watch.

“This document contains highly confidential information, the knowledge of which is limited only to the parties involved. The department itself has safe-guards in place in relation to the handling of this document and its handling is strictly limited to a need-to-know basis.”

Save the Children declined to comment on the document, referring Crikey back to its earlier statement with the department.

Although the department has settled with Save the Children, Morrison has refused to apologise for comments he made about the organisation when he was immigration minister.

The impact on the mental health and employment opportunities on the staff involved has been immense. One removed staffer, caseworker Natasha Blucher, told a parliamentary committee last year that she was distraught at the allegation that Save the Children staff were encouraging self-harm and had helped organise protests:

It’s not an ‘on water’ matter so why won’t Morriscum at least apologise? After all, it is tax payers money being used to repair the damage he caused.

Gerry Harvey. Are you paying attention?

Under governments of both hues our FOI laws have been whittled down to an absolute travesty of what was so grandly intended. Full stop, end of freedom.

The advocates have been telling quite a few porkies though, so it’s hard to tell whats the truth and what is false. What we do know is after the STC staff were removed from the island, self harm and riotous behaviour decreased.

Another Prime example is the Abyan case. They lied and said she absolutely wanted to have an abortion in Australia. Twice she was flown to Australia at great expense by the Aussie Taxpayer. Twice she refused once she got here to get the day procedure.

We know this because she had the baby in Australia in May despite being brought here is October for the procedure. Covered by none in the media except The Guardian and so these advocates were never challenged on their mistruths and the Aussie public once again misguided on fanciful stories and fake moral outrage. Disgraceful.