Keen to avoid a repeat of the 2013 WA Senate debacle, the AEC is using digital scanning technology. But unfortunately we will not know the results for a very long time, write Myriam Robin and Josh Taylor.

Last election, the Australian Electoral Commission lost 1300 ballot papers in Western Australia, forcing the state to another vote. But this time around the AEC has outsourced the process of transport and storing the papers, to try to prevent a repeat.

“Under the oversight of AEC officers, Fuji Xerox is responsible for receiving, transporting, tracking and storing ballot papers at their facilities,” a fact sheet on new Senate counting procedures reveals. This change came from an investigation into the lost ballot papers by Mick Keelty in 2013 and a parliamentary inquiry into the election.

The Keelty report found that, in the case of WA, there was a lack of detailed, trackable and accountable inventories for the movement of the ballots between the warehouses, as well as improper segregation of the various ballot papers at various stages of the counting.

“Ballots were left in open, unsecured boxes at the recount centre overnight, in the custody of a lone security guard, who had not been vetted by the AEC for political neutrality, without CCTV coverage,” Keelty found. Under the new system ballot papers will be stored in barcoded boxes that are meant to be scanned every time they are moved — this is intended to ensure AEC staff know where all ballots are at all times.

The AEC is due to renew its counting today, after a day spent returning votes cast outside people’s electorates to their rightful place. As well as the lower house, in which six seats still remain in the balance (the ABC says 10 are still too close to call), the AEC will begin work on the complex Senate vote, which has to be finalised by August 8.

For the first time, the AEC is using electronic scanners to scan and digitise 100% of the Senate ballot papers cast in last weekend’s election.

The Senate voting changes passed through Parliament have necessitated the scanning of all ballots. Before the changes, 97% of Senate voters just put a “1” next to the party they wanted to decide their preferences — only below-the-line ballots, 3% of those cast, were were manually digitised and stored.

Last weekend, voters were told to number one through six above the line, or at least one through 12 below the line. The added complexity of the count, as well as the need to store all these preferences, led to a $17 million contract with Fuji Xerox earlier this year to provide the machines needed. The scanning is taking place at dedicated Central Senate Scrutiny centres at Fuji Xerox buildings in capital cities.

Ballots will be placed into automatic scanners, which will use optical character recognition to determine the order of preferences on more than 12 million ballot papers. Hundreds of staff will verify unclear entries. Scrutineers are not allowed in the room during the scanning process, which is tightly controlled, but they are able to view the verification process. And if there are questions over a specific ballot paper, a scruntineer can request to see that physical paper during the verification process. If there’s uncertainty over where a preference goes on a specific ballot paper, it is sent to an AEC officer for a decision.

As Crikey pointed out last Friday, at ballot booths across the country, booth workers grouped Senate ballot papers by first preference to give an indicative, early count of how the Senate might look. But this count does not reallocate preferences — that’s done over the next three weeks, at central processing areas across the country.

It takes a long time because it’s impossible for the AEC to say who does and doesn’t have quota until it has considered the full electorate’s unexpired ballots — and this quota will change depending on how many ballots are correctly filled in, and how many do not expire before the final distribution of preferences. The new Senate system may be more democratic — in that it forces people to control how their preferences flow rather than leaving that to the parties — but it creates a far greater level of counting complexity for the AEC.

[How your vote gets counted on election night]

Last month, the AEC told The Canberra Times it was still “finalising some matters” about the Senate count. “The AEC is investigating options to semi-automate the count process and, where appropriate, considering the use of scanning technology.”

The paper questioned whether the AEC would be ready in time. But last week, the AEC was in touch with political scrutineers to explain the new system, and to offer them tours of the scanning facilities.

One scrutineer who went on one such tour was left wondering how the AEC could afford the expense. The AEC describes the process as only “semi-automated”. Given the sheer scale of ballots to count, that means it won’t be that cheap. Dozens of staff at each capital city are being hired to work two daily shifts — for the next three weeks, counting begins at 7am and doesn’t conclude until 11.30pm every night. Staff in Sydney and Melbourne are also working Saturdays to get through all the ballots.

The parliamentary inquiry into the 2013 election correctly predicted that media would be frustrated with delays in knowing the full results of the election, but said the fourth estate would get used to it:

“Clearly, there will be associated impacts on media coverage of Senate elections; but … the committee is of the view that media and community expectation may have to change, as increased demand for instant information can only be satisfied to a finite degree.” 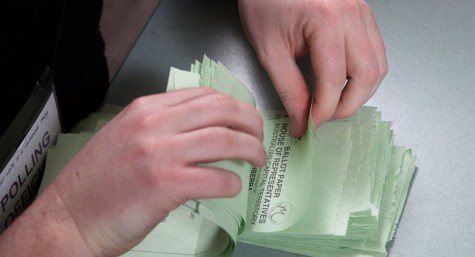 How your vote gets counted on election night 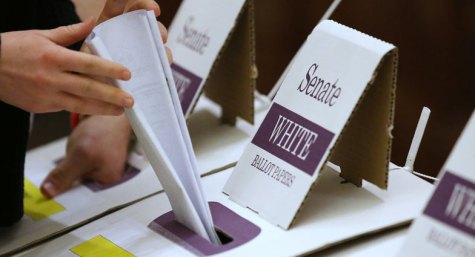 You are only half correct when you say “.. and this quota will change depending on how many ballots are correctly filled in, and how many do not expire before the final distribution of preferences.” Once the number of formal ballot papers has been determined, the quota will be set, but will NOT change as preferences on ballot papers are exhausted during the count. Look up Antony Green’s blog on the ABC web site if you don’t believe me.

Hi Paul. Thanks – I’ll look into it! Checked as much as I could but entirely possible we made an error – this stuff is complex.

It’s not in the least complex but I query why you used the word ‘quota’ in this phrase “this quota will change depending on…”.
The quota is set in the Constitution and only changes depending on whether it is a half or full Senate election.
Perhaps you meant to say “how many had reached the quota”?

AR, are you confusing “quota” with the number of senators to be elected? From the AEC site: “The quota is calculated by dividing the total number of formal ballot papers by the number of senators to be elected plus one, and then adding one to the result (ignoring any remainder).”
I think PaulM pretty much meant what he said, though the ‘quota’ referred to is not the “actual” number (arguably a platonic ideal in any case), but the number used for interpreting the results as they come in. Of course legal challenges and recounts could also help determine the final, “actual” quota.
I don’t think PaulM could have intended “…reached the quota” because, as he clearly understands, with the current system there will be candidates elected whose tallies do not reach the quota. Indeed it is theoretically possible under this system that none of the successful candidates actually achieve a quota (see Elected without a quota at http://www.aec.gov.au/voting/counting/senate_count.htm) .
The Constitution does not mention quotas and is silent about how the senate is elected, delegating this matter to the Commonwealth parliament with the proviso that the method be uniform for all the states.
Finally, our intrepid reporter, Myriam Robin, does not deserve the dismissive chastisement you direct her way, because, to many, the inclusion of exhausted votes in the determination of the final quota makes neither immediate nor intuitive sense and leads to the apparent anomaly that candidates will be elected without reaching the quota. When the previous parliament changed the method to allow for optional preferential voting, they could have decided that the final quota should be determined minus exhausted votes (i.e. by continuous recount) but they didn’t. Which, in the absence of digital entry voting, is fortunate – because, without digital entry, the AEC would probably never arrive at a final result.

It does my head in just thinking about it.

Myriam,
The AEC has a clear explanation:
“Elected without a quota
If, as a result of exhausted ballot papers, there is not enough votes in the count to fill remaining vacancies the legislation provides, as it did prior to the Senate voting reforms:
– that if one Senate position remains to be filled, and two candidates remain, the candidate with the highest number of votes shall be elected irrespective of whether they have reached the quota; or
– that if the number of continuing candidates is equal to the number of remaining vacancies, those candidates are elected”

Interesting information, thanks.
A query was raised on ABC News Breakfast today ie: if someone fills in the ballot paper perfectly but then draws doodles etc on the paper is it a legitimate vote which will count?

Obscenitites (quite common), comments, doodles and embellishment do not render a vote informal so long as the intent of the voter is apparent.
The only disqualification is something that purports to indicate the identity of the voter.

We are indebted to you, AR.

“only the 3% of below-the-line ballots were NOT (???) were manually digitised and stored.”

Is this a mistaken “not”?

Crikey is becoming as bad as the old Manchester Grauniad for its appalling proofing – no biggy if it is a clear typo. but the evil of SpellCheck often inserts a different word to that intended by the semi literate, or drunk in grundle’s case, scribblers proliferating these drear daze.
However the grammar function of even cheap WP would pick up missing or repeated words/phrases so how they make it to our screens is a puzzle.

With the complexity of Senate voting, and the importance of resolving the vote, and the minor point that we do live in the 21st century, why oh why do we do primitive things like filling in paper forms with pencils? If the pathetic argument against electronic voting is that it discriminates against those without an app or access to a screen, then spend the enormous budget on helping these people. Even some of the supposedly “less developed” countries (and some of our armed services) are using current technology! I do my tax that way – is there a problem?

I voted on-line from the bogs of Scotland in the last NSW election without any hassle and there are few less computer literate than I.
Just don’t give the job to whoever created that clunky myGov site – life is too short to try navigating that hotchpotch.

There are very fair arguments around electoral fraud and maintaining anonymity when it comes to electronic voting.

Especially since the prevailing political ideology would undoubtedly see both hardware and software provided by the private sector.