The RBA goes dark on inflation

Expectations might move slowly, but that’s all the more reason not to let deflation get its hooks in.

The RBA attitude towards inflation has become suddenly obscure. Does the bank really want to keep inflation inside the target range?

For the first time in years, it is unclear whether the inflation-targeting regime — which has served Australia so effectively in the period since Keating — is fully functioning.

Here’s the problem: the most recent data showed negative inflation for the quarter for the first time since 2008, and just 1.3% through the year, the sixth consecutive quarter with a result under 2%.

This is a rare confluence of downward pressure. The last time negative inflation in the quarter and annual inflation below 2% coincided was 1997. 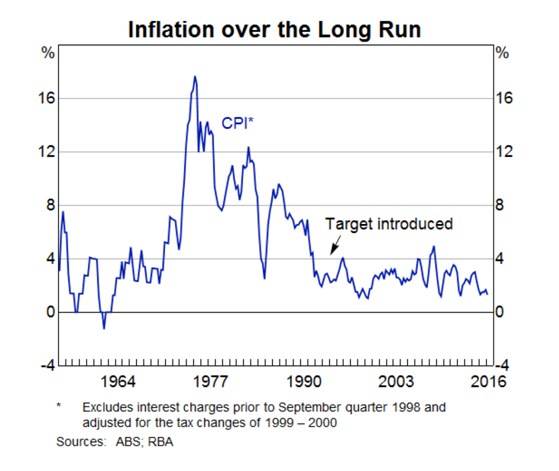 The result was well outside the RBA’s 2-3% target range. Curious. What happened next, however, was even more odd.

The RBA board met shortly after the surprise data, and it didn’t change policy settings. OK, fine, maybe they will say something reassuring. But no.

RBA governor Glenn Stevens said this in his announcement of the decision to leave interest rates untouched:

“Inflation has been quite low. Given very subdued growth in labour costs and very low cost pressures elsewhere in the world, this is expected to remain the case for some time.” (Italics mine.)

Later, in the same announcement, he referred to “inflation returning to target over time”.

This is unusually loose language for the central bank.

Inflation targeting is supposed to be achieved “over the cycle” (i.e. over the business cycle). Do the words “for some time”, in the recent statement, really imply a period shorter than “over the cycle”? That’s the only interpretation you can make and keep the RBA’s inflation-targeting integrity intact.

(Why do we need stable expectations? Because the real interest rate is the interest rate minus inflation. Getting people to believe the second part of that equation is steady gives monetary policy much of its power.)

A lot of the work of the RBA is what they call “jawboning” — just talking about what it would do in certain scenarios in order to keep expectations on track. Why this most recent inflation data led to no jawboning is a mystery.

The latest undershoot was followed by a sort of muttering that makes you wonder if those 13-year-old words still ring true.

Some good news: despite the low inflation data, expectations have so far barely budged. Expected inflation is 3.5%, down from 3.6% at the start of the year, as measured by the Melbourne Institute’s regular survey (trimmed mean).

(That survey is fascinating: 18% of people report they expect inflation of 10% or more, undermining either every economic theory that relies on rational expectations, or Australia’s system for teaching people percentages.)

Expectations may move slowly, but that’s all the more reason not to let deflation get its hooks in.

With the US economy stuttering and its currency falling, Australia has a stronger dollar than would otherwise be the case. More expensive imports are not going to lift inflation in the short run. Something else is required.

The big risk for policy is that cutting rates to raise consumer price inflation could instead raise house prices and create additional instability down the track. One live suggestion is to simply reduce the target range, but that could unanchor expectations all by itself.

The next inflation numbers come out on July 27. Stevens will leave the job about six weeks after that and Phillip Lowe will take over. If deflation starts to get entrenched, a new governor and a completely new parliament could have a new and very uncomfortable policy problem to solve.

” all the more reason not to let deflation get its hooks in.”
Central banks around the world have failed to control the deflationary situation. Perhaps the RBA has been watching closely and saving what little firepower it has left for a crisis.

The biggest problem is that the official inflation numbers are worthless because whenever inflation gets too high, the basket is redefined to take out the things making it high.

Hence the reason even with things like property prices, healthcare costs, electricity costs, etc, going up 5-10%/yr, “inflation is low”.

So from the group that spoke about ‘negative growth’ (contraction) we now get ‘negative inflation’ rather than deflation.

Apart from the occasional dip in petrol prices, can anyone nominate anything that is cheaper now than a year ago?
And Bambi Baird has just told NSW to expect hundreds of dollars increases in electricity prices and it has nowt, absolutely SFA to do with privatisation.
Soon he’ll be offering the Coathanger for sale.