How to create your own ‘Mediscare’ text message

Text message spoofing is not a new phenomenon, and it is not a particularly difficult thing to pull off, as Labor seems to have done for its Medicare campaign.

Liberals are furious at a text message campaign from Labor purporting to be from “Medicare” warning that Prime Minister Malcolm Turnbull planned to privatise the service if he won the election last Saturday.

Late on Saturday evening and on Sunday, campaign strategists and politicians largely blamed Labor’s Medicare campaign for why we are now waiting for the Australian Electoral Commission to count the votes in just over a dozen key seats to determine the outcome of the election — likely a hung parliament, or a slim Coalition majority.

Queensland Labor has confirmed it was behind the text messages, and The Australian reports today that the so-called “Mediscare” campaign was the brain child of Labor’s digital director, Erinn Swan, the daughter of former treasurer Wayne Swan.

One text message seen by Crikey sent on Saturday morning at 10.41am with the subject/sender line of “Medicare” stated:

“Mr Turnbull’s plans to privatise Medicare will take us down the road of no return. Time is running out to Save Medicare.” 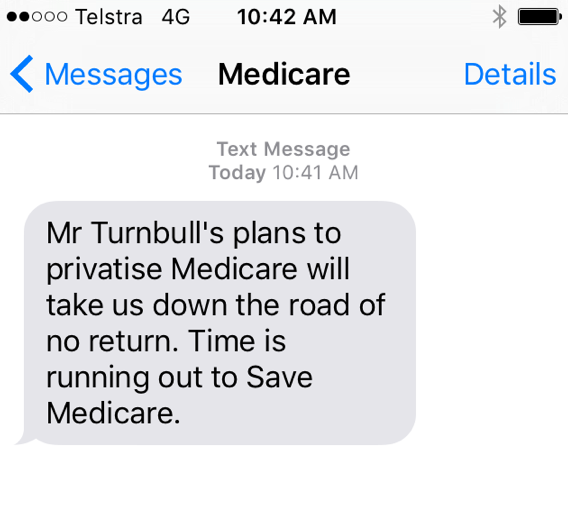 Both Turnbull and Attorney-General George Brandis have said the matter has been referred to the Australian Federal Police for investigation. A spokesperson for the AFP said it received the referral on Saturday, and it was being assessed.

“This matter is now being evaluated and whilst this occurs it would not be appropriate to provide further comment.”

Text message spoofing is not a new phenomenon, and it is not a particularly difficult thing to pull off. While it is more difficult to pretend to be sending a message from a specific number, sending messages with a specific name as the sender is relatively simple, and is frequently used by companies across the globe for marketing and other alerts for their customers.

It’s not very expensive, either. One service, TextMagic, charges just $0.082 per text message. For 100,000 text messages across the country, this would only have cost Labor $8200.

Some had suggested it was a simple editing of the subject heading, but that does not change the sender of the message.

Labor may find itself in breach of the law for the text messages. The Commonwealth Electoral Act states that distribution of something “likely to mislead or deceive an elector in relation to the casting of a vote” is open to a fine of up to $5000 for a corporation. The Human Services (Medicare) Act also prohibits use of the name “by an association in connection with any activity of the association with the result of implying that the association is in any way connected with the Commonwealth, the Chief Executive Medicare or the Department”.

The party would not fall foul of the Spam Act as there is an exemption to allow messages to be sent without consent from registered political parties.

unlikely Electoral Act s 329 applies
“likely to mislead elector in casting of vote” is read narrowly by courts to apply only to the actual marking of a ballot paper eg cross vs tick. Its not about truth and lies in campaign advertising
How about whether properly authorised per s 328?
It is not anonymous (on enquiry) so probably only technical breach
The AFP referral by the Liberals is a limp biscuit

So was “Medicare” necessarily the (alleged) source of the text, or could it just as easily be the subject?

a r
Reply to  Archibald

The texts were almost certainly sent using a bulk SMS messaging service (e.g. bulksms.com or similar), and not “spoofed” as the article suggests. And depending upon the service used, there would have been a number of options for Labor to use in composing its texts.

At one end would be an API-level integration with the messaging service, which would probably be clear enough and well-documented enough to leave little doubt that what was being set was the ‘Sender’. At least to the developer who was integrating with it.

At the other end would be dispatching messages through the SMS provider’s own web interface, which may or may not make the distinction clear.

And the in the middle would be an SMTP to SMS API, which would allow Labor to dispatch text messages by sending email(s) to the SMS provider. In this case it would be trivially easy to enter ‘Medicare’ as the message subject and not realize that it would be interpreted by the messaging platform as the sender instead.

LOL Now would that fine be $4k per text, or total?

Any issues with there not being on it who authorised it?>

Surely the afp have better things to do than cater to turnbull’s list of things he doesn’t like. He doesn’t muck around, had that sbs boy sacked for not much.

I trust that the law and order loving Brandis will also refer Julie Bishop’s driving whilst using a mobile phone to the relevant authorities?
Didn’t think so…