Andrew Bolt was not happy on election night. Plus other media tidbits of the day.

Andrew Bolt was the first to call on Malcolm Turnbull to resign, in a stunning election-night spray on his blog (repeated on Sky News) that accused the Liberal leader of having “led the party to humiliation, stripped of both values and honour”. Whined Bolt:

“You assassinated a Liberal Prime Minister, Tony Abbott, who’d won an election by a huge margin.

“You promised to do even better than him.

“You then treated the Liberal base like dirt, smashing it with a huge super tax, refusing to speak to conservative journalists, repeatedly humiliating Abbott.

“And now look. Almost everything turned to ruin.”

This morning, he’s posted a public petition reiterating the demand on his blog, which readers have added their support to in the comments field.

Election night TV. Kerry O’Brien can be at ease; the ABC coverage he anchored for elections is solid and remains in place. In a record-breaking seven hour broadcast, the ABC simply dominated. It had an average 1.7 million from 8pm to 10pm, clearly out rating Seven (485,000) and Nine’s (817,000) carnival-like offerings, Laurie Oakes’ and his rotating tie (a bid to foil Sportsbet’s betting market on what colour tie he’d have on — a highlight of the night) notwithstanding.

Disappointing was Nine’s use of its chairman, Peter Costello, as a commentator (and boy he got it wrong by calling a Coalition win — narrow, mind you — early in the night). Costello was there because had had been used in the past by Nine on its election night coverage, but he is now very much yesterday’s man, with less relevance than John Howard.

Seven’s panel featured the surly Mark Latham and a snarly Alan Jones, though the bombastic panel did deliver some laughs. Jones accused co-panellist and Turnbull-backing politican James McGrath of being “captain of the bed-wetters” who caused the Coalition to shift leaders (McGrath’s response: “I actually don’t care what you think, because you’re not a friend of conservatives, you’re not a friend of the Liberal National Party … You’re the king of the bed-wetters actually. You are actually a grub.”)

Later on, Sam Dastyari invited senator-to-be Pauline Hanson to join him for a halal snack pack (chips, meat and sauce layered in a styrofoam container — a greasy speciality of Sydney kebab shops). She refused. “Not happening. Not interested in Halal, thank you … I don’t believe in Halal certification.”

On the ABC, much of the interest came from Scott Morrison’s persistent insistence the Coalition was doing just fine. Penny Wong joined Chris Uhlmann in smiling wisely at Morrison’s “bar-lowering” (her words) in defiance of what was showing up in the count. Morrison did himself no favours with his performance. He has an inability to relax.

The ABC got 1.717 million national viewers for the first part of the coverage, including more than half a million on News 24 — an all-time high. But the battle for hostess of the night between Leigh Sales (7.30) and Annabel Crabb (Kitchen Cabinet) was fearsome and amusing at times, and off-putting at others. It was hard to work out if these two competitive journalists and good friends were dual anchors, as we get on News Breakfast, or whether Leigh Sales was the anchor and Crabb there for colour and insight (if so, what were Chris Uhlmann and Barrie Cassidy doing?).

The night’s award for accurate coverage and analysis goes to Barrie Cassidy. Cassidy’s persistence in arguing that the vote was heading to an inconclusive result (as the night went on), fell on deaf ears, at times (meaning the rest of the ABC panel) — until they woke up and stopped listening to Morrison’s flawed analysis. — Glenn Dyer (additional reporting by Myriam Robin)

Polls: what good are they? Writing in the Oz, Chris Mitchell says Newspoll will be a relief to those who’ve seen pollsters fail to gauge the mood in Queensland and Victoria, and overseas, in the recent Brexit referendum:

“Despite the cliffhanger election result, Newspoll in The Weekend Australian on Saturday was closest to the actual poll result, ­maintaining its three-decade-long reputation as the best and most influential political pollster.”

But what’s this we read in the Fin? Edmund Tadros writes:

“The last Fairfax/Ipsos two-party preferred poll before the election was the closest of any poll to the interim result of the Coalition on 50.1% and Labor’s 49.9%.”

Tadros and Mitchell have pointed to different things to justify their paper’s polling. Mitchell says Newspoll had almost the right level of primary support for the parties, while Fairfax’s analysis is based on the predicted two-party preferred result.

Both The Oz and Fairfax have changed their polling providers this election (as we covered at the start of the campaign), but the new outfits have thrown up no upsets this time. — Myriam Robin

Post-Brexit doldrums. The reason why UK print media group, Trinity Mirror is cutting 15 journalists has become very clear with a trading update, which revealed a continuing slide in print advertising and circulation revenues that the company’s digital revenues can’t replace. The company spun the cuts as a way of meeting any problems from the Brexit vote hitting its profits. The reality is that the slide before Brexit has prompted the cuts and more could be in store as the slide continues at its current rate.

On Friday, the publisher of the Daily Mirror and Sunday Mirror and Sunday People, and more than 150 local and regional newspapers, reported that its print advertising sales had fallen 17% year on year in the past six months. And despite a 14% increase in revenue from digital operations in the period, the slide in print ads meant overall revenues were down 8% from the first half of the 2014-15 year.

It is further evidence that the relentless decline in print ad revenues continues to undermine the UK newspaper industry. Print advertising revenues across the sector fell 15% in 2015 and analysts (Alice Enders of Enders Analysis) predict that the UK’s vote for Brexit could lead to a 20% fall this year. — Glenn Dyer

Front page of the day. On the Libs embarrassing results in Tasmania. 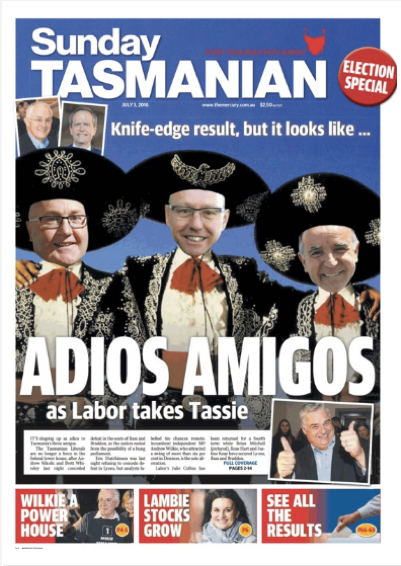 On the ABC panel Morrison’s constant denial of the trend is consistent with his poor grasp of reality & unwavering stand which frequently conflicts with facts.

Please tell Annabel Crabb to desist from wearing outfits which badly strobe – she was not easy on the eye. For seven long hours….

Scott Morrison was most ungracious , and spent most of his time going “blah, blah, Labor’s historically low primary vote …blah” as if trying to kick goals against the trend of a 2PP vote going against his Coalition (Liberal + Nationals). He was very painful to watch and definitely a commentator the ABC should avoid next time round.

I can’t understand why nobody has pointed out the ABC’s appallingly inaccurate SEATS WON strap which went up, down & sideways throughout the night and was never within cooee of being correct.
I doubt that Antony Green was responsible for the graphic but it was infuriating and utterly misleading, right through to the close.

Patty and Selma Bouvier – funniest part of the night was Sales diving in, defending Mr Teeny’s honour from that Wong “slur” toward the end of the night.