The micro-party candidate said he struggled to find volunteers, but found a novel way to get around it.

In the inner-Melbourne seat of Higgins, where Assistant Treasurer Kelly O’Dwyer hung on in the face of a concerted campaign by the Greens, she was also targeted by the candidate for the Liberal Democrats, who took a novel approach to finding people to hand out his how-to-vote cards. Robert Kennedy, who says he stood as a protest against the Liberals’ changes  to superannuation, paid for models to help man the polling booths and hand out pamphlets to voters. 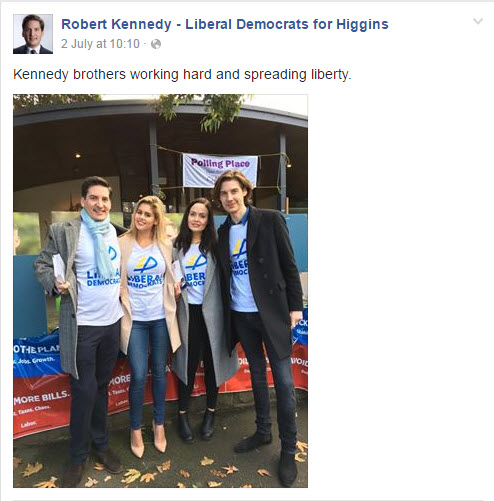 Kennedy confirmed the tip to Crikey, saying that he is friends with the owner of Giant Modelling Agency, and although he paid “mates’ rates”, the women who worked on his campaign were paid, and “well above award rates”. The party’s future in the Senate is uncertain, with it unclear if David Leyonhjelm will be returned by NSW voters. Kennedy says the party didn’t pay for the models, but that he did out of his own pocket, and had received some donations as well. Kennedy says employing models for the job was more about getting boots on the ground than gaining votes because of attractive women. “It was more man power, literally having someone there. Maybe some men would have taken a card that wouldn’t have.” Kennedy said the models needed to become familiar with the policies, even if they didn’t agree with them, and in the end the models did vote for him. The seat of Higgins was hotly contested, with accusations that a Liberal supporter bit a Greens supporter, and that Greens posters were pulled down overnight on Friday. Kennedy said that the volunteers from all sides were courteous. Kennedy is currently sitting at just over 1% of the vote, a result that exceeds his expectations.