With Malcolm Turnbull's election night speech well after midnight, how did the papers publish the result and stay current?

Before 9pm on election night, former Liberal treasurer Peter Costello called the election for the Coalition. The claim, made on live TV, would be corrected later in the night. For the papers though, which had put their first editions to bed well before that, anything so glaringly wrong would remain in black and white, cutting into the credibility of the mastheads.

It’s a challenge for the editors of Australia’s papers, but one they are used to managing.

“You want to make the first edition relevant, but you can’t push it too far,” Mick Carroll, the editor of the Sunday Telegraph, told Crikey this morning. “The last thing you want to do is make an assumption or get anything wrong.”

By the time Malcolm Turnbull took the podium at the Wentworth Sofitel Hotel, it was well into Sunday. Labor leader Bill Shorten didn’t give his speech until after 11pm. Newspaper deadlines are anywhere from 7pm for early editions to just after midnight for final ones.

The Sunday Tele, Australia’s highest circulation paper, printed five editions, with the first going to bed at 8.30pm and the latest — which, at roughly 280,000 copies, comprised the bulk of the run — not until 1am. The paper was very cautious with the first two editions, Carroll says.

Four of the Tele’s five editions on July 3

With no fresh election-night photos of the leaders on hand, most papers used photos from the archives or from the day’s campaigning to illustrate the front page. Nonetheless, by the final edition at least, most of Australia’s papers did manage to get something resembling the result on the front page.

Fairfax has earlier deadlines than its News Corp competition. It worked around them at the Sun-Herald and Sunday Age with a 16-page election section at the front of the paper. The Sun-Herald went through significant changes between editions — the earliest was obviously put together before any significant results came in, while the final said the election was on a “knife edge”. None of the editions had any photos from the speeches of either leader on the front page. 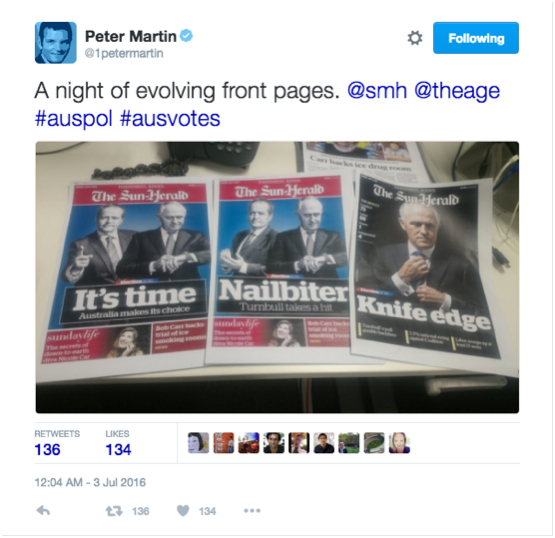 Three of the Sun-Herald‘s five editions on July 3

Of course, events like these aren’t just a challenge for the front page. Finishing the paper at 1am isn’t that rare for the Sunday Tele with big events, but what was different about the election was the sheer amount of rewriting and rejigging many pages took. Between editions, Carroll reckons about 60 pages had to be redone. Some pages were changed no fewer than seven times. About 25 people were still in the office at 1am putting the paper to bed.

“The future of newspapers relies on them being as current as they can possibly be,” said Carroll. “We take that pretty seriously at the Sunday Tele.” 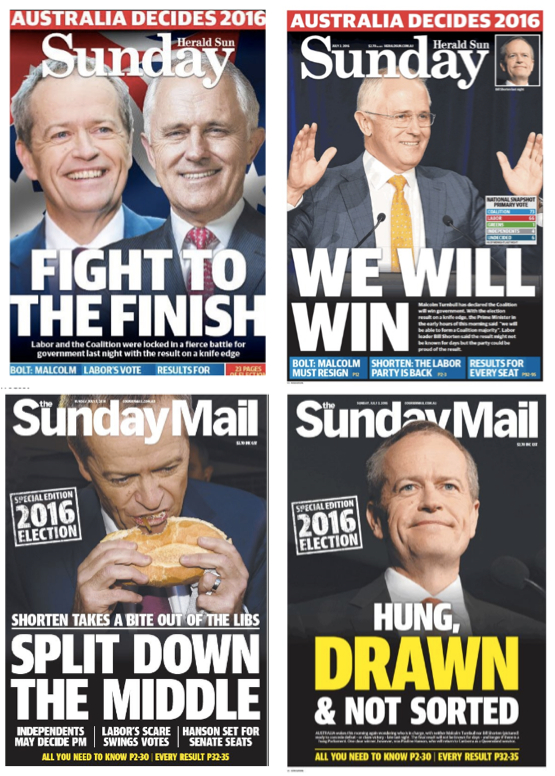 Carroll and the paper’s other senior editors started working on Saturday at 7am in a bid to get all the non-election coverage ready and out of the way. Carroll didn’t get home until 4am on Sunday. But he says it was a fun day. “This kind of stuff … it’s what makes working in this industry so satisfying.”

They might have done something on the front pages but the Sunday Age at least ran content predicated on a Turnbull win with a reduced majority, quickly dodged up to partially correct for the wrong assumption!

As good a demonstration of the irrelevance of the dead tree press as could be
The only loss from their demise would be cocky cages.

Not quite “IT WAS LIMITED NEWS WHAT DID IT”?
I reckon some people might overestimate the power of the Murdoch’s Limited News – as I believe others like to exaggerate the powers they believe critics ascribe to Limited News.
I do think Murdoch’s advertors are realistic enough to realise the limit of both their powers of persuasion and over voter perception – happy to be the straw that breaks the back of the camel of civilised discourse and democracy. …. What good is a camel with a broken back?