The moment Labor lost the election

The opposition’s efforts to pitch every policy debate as a battle between “us and them” may not have galvanised voter support in the way Labor wished.

By this time next week, efforts will be well underway to frame tomorrow’s election result. Both the victors and the vanquished will jostle for political advantage, hoping their version of events will be the one that is etched into our history books.

So without the benefit of hindsight, let’s look at the campaign — which party did it best, which leader performed better, and what were the moments that likely decided the outcome?

To the interested bystander, Labor ran a tight and professional campaign. Its use of social media and email to get its message out was superior to the Coalition’s efforts using the same digital platforms.

Shorten himself stepped up to the challenge, undergoing voice coaching to banish the sing-song delivery style that left listeners feeling patronised, dispensing with all but the most cutting zingers, and polishing his responses at a series of town hall events around the country.

Until the final few weeks of the campaign, Shorten remained inexplicably happy while mixing with the hoi polloi. The man with seemingly nothing to lose appeared to be having the time of his life.

That demeanour changed somewhat when many of the key marginal seats Labor needed to secure government appeared disinclined to give the other mob a go. Shorten became more brusque with journalists as their questions increasingly sought to probe the weak spots that emerged in Labor’s policies and costings.

And, perhaps unfortunately for the Australian polity, it was this element of Labor’s campaign that let them down.

[Rundle: on the sugar-hyped Shorten express, as Bill gleefully loses the fight of his life]

The opposition’s decision earlier in this parliamentary term to eschew a small target strategy was undoubtedly an enhancement to our political discourse.

Sure, Labor managed to squeak “me too” on national security and border protection issues, but in most other respects it offered Australians an alternative perspective on important policy issues and what should be done about them.

It was probably a mistake, however, to leave the bulk of the effort to explain that alternative approach until the actual election campaign.

It was really only in these final weeks that Labor attempted to convince Australians that the “economic competency” that we pretty much value above all other qualities in our political leaders could also be demonstrated — and delivered — through beneficial health and education policies.

Leaving it to the last weeks gave voters the impression Labor expected them to take the opposition’s word on the connection between economic growth, a healthy community and an educated populace. However, voters who still associated a balanced budget and a Liberal treasurer with good economic management probably needed more time to become accustomed to this other paradigm.

Labor devoted much more time instead creating divisions within the community when voters were likely looking for an end to disharmony of the Rudd-Gillard-Abbott years.

No doubt the seeds of this strategy were sown at the time of the opposition’s successful campaign against the unfairness of Tony Abbott’s federal budget in 2014. However, the opposition’s efforts to pitch every policy debate as a battle between “us and them” may not have galvanised voter support in the way Labor wished.

Having not convinced voters of the merit in prioritising social capital over budget repair or that those who’d accumulated wealth should be demonised, the opposition then overestimated voters’ willingness to forgive Labor’s admission that it would produce a higher deficit than the Coalition over the next four years.

Bullish commentators said at the time that this was the moment Labor lost the election — and they were right. Or perhaps more accurately, given that governments lose elections rather than oppositions win them, this was the point at which Labor let the Coalition win.

While the opposition took a number of chances with its policy offering and election campaign this time around, the government took none. The Coalition ran a traditional, white-bread campaign that pitched Malcolm Turnbull, the former banker and self-made multi-millionaire, as the safe pair of hands with a plan to fix the economy.

Turnbull was less relaxed and comfortable than Shorten appeared during most of the campaign, although his mood improved appreciably in the final days as it appeared likely the Coalition would be returned to government.

He also struggled with the meet-and-greets that are the mainstay of modern election campaigning, often appearing more like a patrician landholder slumming it with the serfs than an egalitarian man of the people.

Most importantly, neither the man himself nor the Coalition’s policies engendered the levels of dissatisfaction or anger that usually result in a government being thrown out on its ear. Voters were clearly disappointed Turnbull was not actually the progressive Messiah, but they appeared willing to give him another go.

In fact, Turnbull’s biggest test may come after election day. Voters may have chosen Turnbull in the hope of there being continued stability within the government, but the looming battle on same-sex marriage still threatens to blow it apart.

The more seats Turnbull loses from those gained by Abbott in 2013, the less authority he will have to insist the Parliament pass legislation to enable the plebiscite and then enact its outcome, assuming Australia votes in favour.

This means that if the Coalition wins on Saturday, as expected, it will not only be the leadership contenders within the opposition pushing their preferred version of what the election outcome actually means for the future of their party.

Opposing forces within the government will also be keen to frame the election result as an affirmation of their preferred way forward for the Coalition. If the conservatives succeed in writing history their way, they could achieve what Labor was unable to do — the defeat of Prime Minister Malcolm Turnbull.

It really is the economy, stupid 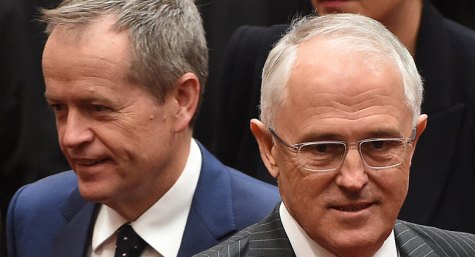 I have to say: anyone who still believes this current government is competent to run an economy hasn’t been paying attention.

There’s a lot of them.

A tory voter who is not a millionaire is either a fool or knave – ignorant or lying. And without a shred of decency or EQ.

PaulaM – feeling pretty stoopid now are you?
BTW, anyone who doesn’t know the meaning of foreign words shouldn’t use them as it confirms that they are poseurs, eg mixing with the hoi polloi, the ‘the’ is tautology.
A common error by the shallow & superficial.

“Turnbull was less relaxed and comfortable”…
I imagine he must be shi**ing himself now- his big gamble to assert control over the rabid right that have made a mockery of the “Liberal” party has pretty much failed. Another hostile senate, an decreased majority or hung parliament (IF he gets in), and the ALP gaining a lot of ground. I bet the libs are starting to think Tony’s looking good again. I’d say the defeat of Prime Minister Turnbull was a threeway result- brought on by the ALP, by his own party, and by his own hubris. But then again no surprise there. Australia should deserve better than this.