The newspaper editorials, not surprisingly, back Turnbull

Australia has a long history of election-eve editorials backing conservative parties -- and today is no exception.

Well, it’s a wipeout. Every one of Australia’s major papers has endorsed a return of Prime Minister Malcolm Turnbull’s nine-month government this election. With the exception of one — though you have to go back to last weekend to find it.

Election editorials are a funny thing. They are in many ways a throwback to an earlier era of political reporting — 19th-century political reports mixed editorialising with analysis in a way newspapers have abandoned in recent decades. The order of the day is, for the most part, practised impartiality, but in the editorial before an election papers will throw that to the wind and back one party over another.

Newspaper editorials are written by editors often in discussion with newspaper proprietors. In Australia there’s a “long history of consistent support for conservative parties”, as media historian Sally Young noted in her book on election reporting. Perhaps this isn’t surprising — large businesses and their owners are usually conservative and wary of change, and editorials are meant to be the paper’s view of things.

When The Australian endorsed Labor in 2007, for example (something former editor Chris Mitchell has since said was a mistake), it was the second time it had done so since 1972. The Courier-Mail also endorsed Labor that year — according to Young, it was the first time it had done so in 72 years. More left-wing papers also tended to support conservative parties in election-eve editorials. For example, Young wrote, between 2001 and 2004:

“… the SMH and The Age only endorsed Labor in one of three possible election-eve editorials. The Age supported Australia’s involvement in the war in Iraq and in 2004 advocated a vote for the Coalition mainly on the basis of its economic record, hardly the behaviour of a socialist newspaper.”

Online outlets have not embraced editorials. Crikey hasn’t run one for years, but it used to — we endorsed Mark Latham in 2004. Guardian Australia is one of few digital outlets to have an election editorial, of sorts; today’s carries the line: “Guardian Australia readers are able to reach their own conclusions.”

Where readers can talk back and outlets aim for a more personal, chattier relationship, perhaps there’s something slightly antiquated about telling them how to vote. Today’s papers are still making the most of them, though — many have pointed to them on the front page. That’s the prime real estate and what most readers notice. Not that editorials and front-page takes are unrelated. A 2012 study by economists Joshua Gans and current Labor senator Andrew Leigh found that while most political reporting is studiously centrist, a paper’s election-eve editorial could well be predicted by the slant of its headlines.

And maybe today marks the end of the era: some of the printed newspapers around now might not be come the next election; Fairfax’s Sydney Morning Herald and Age will almost certainly be out of print during the week at least.

The Australian says a vote for Turnbull is a vote to balance the budget and encourage private sector growth, to “urge the nation back on the path to meaningful reform”. On Labor, the paper is scathing:

“Shorten and his Treasury spokesman, Chris Bowen, were upfront about their profligate plan. Rather than disguise themselves as economic conservatives as Kevin Rudd did nine years ago, they were open about a tax-and-spend plan. Sadly, this was the only honesty of the Labor campaign.”

Spare a thought for The Australian Financial Review: its bumper end-of-financial-year edition today also had to find space for the politics. The editorial backs the Coalition, with some reservations:

“In his nine months leading the nation, Turnbull has been too timid in confronting the challenges of securing Australia’s modern prosperity. But, unlike Labor, he at least genuinely accepts there is a problem. If he wins office and legitimacy in his own right on Saturday, he will have a clearer run at establishing the economic agenda he promised when replacing Abbott in September.”

Guardian Australia approaches the endorsement exercise half-heartedly: it says its readers can make up their own minds. For the record, though, it isn’t much impressed with anyone, and encourages readers to consider minor parties:

“In our view the Coalition’s offerings are thin, Labor’s go a long way towards a progressive program, and false threats of looming ‘chaos’ should not deter voters from choosing the Greens, or other candidates with a plausible, fair agenda.” 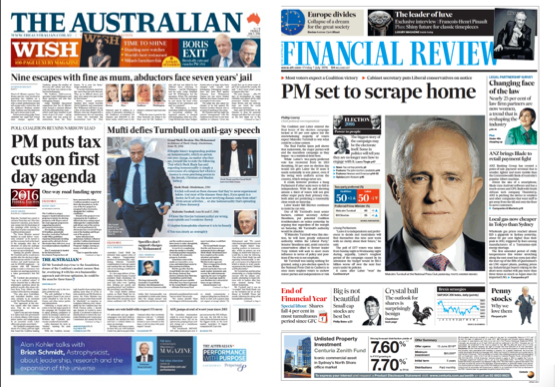 In New South Wales, the choice for voters is simple, according to The Daily Telegraph:

“Either commit to a prime minister and a government that largely recognises the problems we must confront, or opt for an alternative that will blow spending through the roof.”

The SMH hedges a bit more, but still delivers the Coalition an endorsement:

“To earn government, Labor needed to make a compelling case for change.” 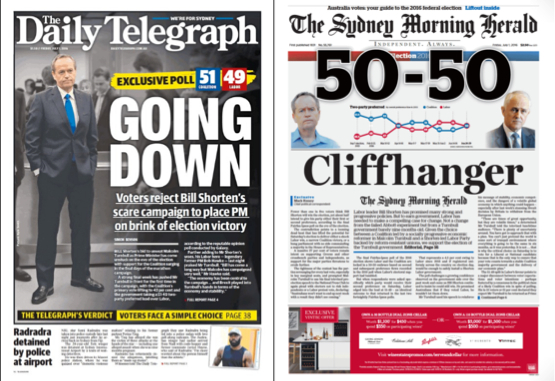 In Victoria, the CFA issue threatens to cost Labor some seats. The Herald Sun makes explicit reference to it both on the front page (which has a bunch of state politicians on the front) and in its editorial today:

“In Victoria, a state-specific issue has broken the containment lines. The raging CFA dispute over the DanielAndrews-backed union takeover of the volunteer organisation threatens to engulf Labor. Yes, it is a state issue. But it is also a window into the relationship between Labor and the union movement …

“The Herald Sun does not attempt to present Mr Turnbull as the perfect prime minister, but we believe he has the greater capacity to provide Australia with the strong government we so desperately need.”

The CFA issue isn’t mentioned in The Age‘s endorsement editorial at all, which also backs Turnbull:

“Shorten has … presented the nation with a legitimate choice. But we believe Turnbull deserves the chance to deliver on the potential that stirred the nation when he came to power less than a year ago.” 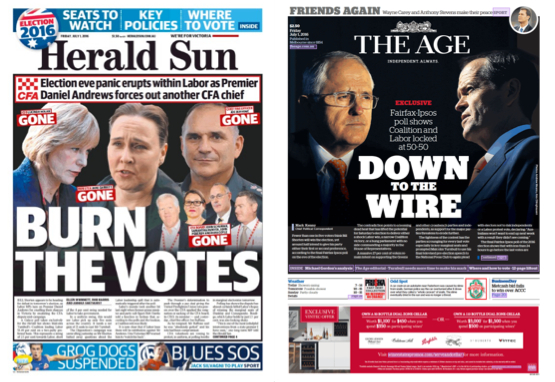 In South Australia, where the Nick Xenophon Team could take Senate spots off Labor and perhaps a lower-house seat or two off the Coalition, The Advertiser says the upstart team’s popularity is understandable, but the Coalition remains the best choice:

“The Coalition and Labor have no one but themselves to blame for the rise of Mr X. He is appealing to a growing band of voters disillusioned with their policy positions and internecine battles.

There is a real chance Xenophon will be kingmaker if we wake up Sunday morning with a hung parliament. Unlike Xenophon, his candidates are relatively unknown quantities. This is the reason a vote for them in either house must be cast with the utmost care and scrutiny …

“It’s the clear view of The Advertiser that Malcolm Turnbull and the Coalition are the right choice to deliver Australia and South Australia the strong and stable leadership we require in these tumultuous times.”

And in Queensland, The Courier-Mail says Turnbull is best to lead, with some reservations about his small-target strategy:

“On balance … Turnbull has demonstrated that he does have what it takes to be a successful and sensible Prime Minister in a time of great uncertainty. He was never going to be a Messiah, but he is a man who is growing into the role and beginning to reunite what was a deeply fractured party.”

Over in the west, The West Australian says stability is the order of the day — so you should vote for Turnbull. It also warns of Senate chaos, urging a Liberal vote in the upper house:

“To vote for a stable government in the Lower House and a destabilising force in the Senate is simply irresponsible.

“It is in the nation’s interests for people to back a major party with properly formulated and costed policies and no party except Liberal or Labor has to face the reality of funding their promises.” 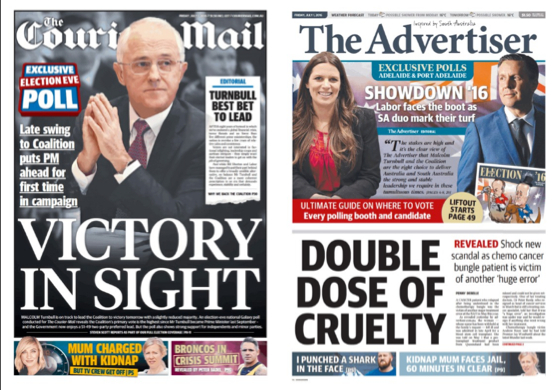 Last weekend, the paper’s major Sunday papers also threw their weight behind Turnbull — apart from The Sunday Age, which focused its election editorial on the value of Labor’s commitment to education funding.

“Labor has risked a big-target campaign by presenting bold policies, and while the party is yet to resolve its vexed relationship with unions, Shorten deserves the chance to govern.”

Turnbull v Dutton: who are the newspapers backing?

One thing that *is* pretty certain, this will be the last Federal election hurrah in newsprint form for most of these fishwrappers.
Certainly no great loss.

There’s a surprise – the Curry or Maul has backed their Limited News Party in every election from Hewson’s “shoe-in(?)” (including in the wake of Children Overboard; and rallied for the invasion of Iraq)) – bar one, in ’07 when not even Murdoch’s advertorial PR juggernaut could save Howard from Rupert’s history, so they decided to save face and “back” Rudd.
In the week preceding that instance there were two editorials pimping individual Limited News Party members, one was Boswell (Senate – lest Greens get a show) and the other Brough – Member for Longman – to the whole state.
After all, they could resume hostilities and that avalanche of negative PR (to eat away at punter perception) at the first opportunity after that election. “Dinner with Burke”, “Tantrums on a plane” and eventually “Utegate”.
Objective? No. Objectionable? Sure.

The demonising of welfare recipients in the closing days by a party that has its very own theft machine operating to finance it’s electoral operations was a highlight..

COL
Fortunately Australian’s have moved on from biased reporting and are capable of forming their own opinions thanks to the internet. Media Barons can now consign their
pathetic newspapers to the rubbish bin where they belong .