A last-week surge has put the Coalition back into the lead, and Malcolm Turnbull is poised for victory, the final Essential Report poll of the campaign reveals.

A late swing to the government is likely to deliver a victory for Malcolm Turnbull, Essential Research’s final poll of the campaign shows. The government has finished the campaign with the narrowest of two-party preferred leads, 50.5%, over Labor, 49.5%, based on an improved primary vote of 42.5%, while Labor’s primary vote has fallen significantly, to 34.5%. That makes for a three-point swing to Labor since the 2013 election; on a uniform national basis that would suggest Labor would gain just nine seats, less than half of what it needs for victory. The Greens have improved their vote to 11.5% (somewhat offsetting Labor’s primary vote fall), while the Nick Xenophon Team is currently on 1.5% nationally (although this can’t be directly compared to previous levels, due the inclusion of South Australian numbers). “Others” are on 10.5%. The poll is based on 1212 respondents, and preferences have been allocated according to party preference distribution at the 2013 election. 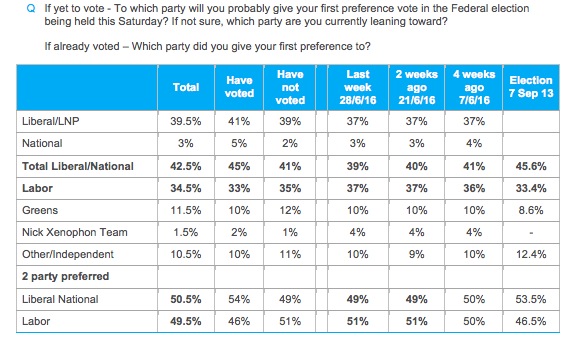 With more than 2 million people having already voted pre-poll, in addition to people postal voting, there’s an interesting split between those who have already voted (22% of respondents) and those yet to do so. Consistent with earlier data showing Liberal voters were more likely to vote ahead of election day, among those who say they have already voted, the two-party preferred outcome is 54%-46% in favour of the Coalition, while for those yet to vote, Labor is ahead 51%-49% off a Labor primary vote of 35%, a Greens primary vote of 12% and Coalition vote of 41%.

On allocation of second preferences, 80% of Greens voters say their second preference will go to Labor when “don’t knows” are removed — down from 86% last week. However, 56% of “other” voters now say they’ll preference Labor, up from 48% last week and well above the 2013 level of 45%.

There’s also been a significant rise in the number of voters who expect the Coalition to win: 48% now expect Malcolm Turnbull to triumph compared to 39% last week; just 21% now expect Labor to win, while 15% expect a hung Parliament (16% said the same last week).

We also have a collation of voting data at state level over the last four-six weeks. Given the late shift to the Coalition, these numbers will tend to overstate Labor’s support, but they’re nonetheless interesting. Using the two-party preferred state outcomes from the 2013 election and assuming a state-wide uniform swing, unadjusted for the late shift to the Coalition, the numbers suggest Labor would pick up nine seats in NSW, six in Queensland, none in Victoria, one in South Australia and none in Western Australia, where a clutch of seats are available to Labor but only once the swing to Labor reaches 4.5%. Given a nationwide swing of 3% to Labor, the Northern Territory seat of Solomon, currently held by the Country Liberals, is also likely to fall. There are no results for Tasmania due to the lack of a decent sample size; Labor is confident of picking up Lyons there and is a strong chance in Bass. 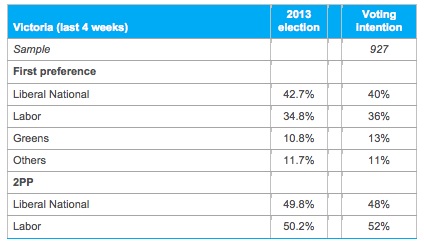 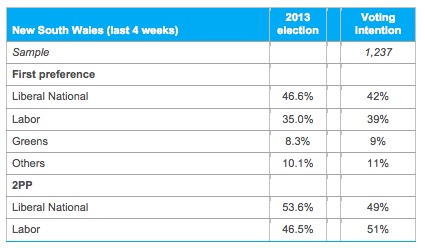 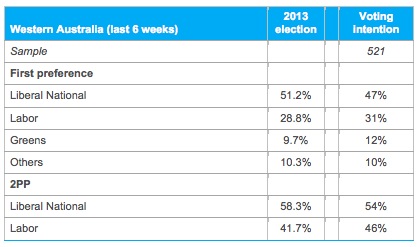 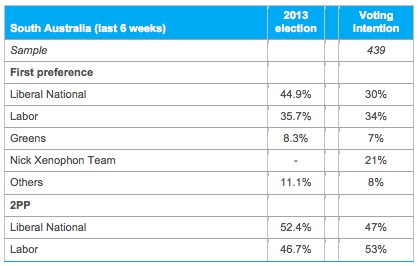 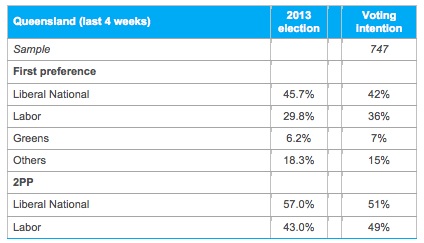 This suggests that even if the election had been held earlier when its vote was higher, Labor would have fallen short of winning government by a handful of seats, although Malcolm Turnbull would have been looking at minority government. If the state swings are adjusted for this week’s shift to the Coalition, the numbers suggest Labor will pick up four seats in NSW, five in Queensland and Hindmarsh in South Australia, plus Solomon and whatever happens in Tasmania.

But the state-level numbers also provide an insight into third party performance. The Greens’ vote in Victoria is 13%, up from 10.8% in 2013, suggesting the Greens should retain two Senate spots there. It also suggests David Feeney’s seat of Batman is a real chance of becoming the second Victorian lower house seat to turn Green. In South Australia, the sample size is just 303 (over six weeks), so not overly reliable, but NXT is polling statewide at 21%, suggesting not merely that Nick Xenophon will secure three Senate spots but that it has a strong chance of knocking off Rowan Ramsey in Grey and Jamie Briggs in Mayo. In Queensland, “other” is polling at 13%, suggesting Pauline Hanson’s ambitions to return to politics are a strong chance of being fulfilled.

Based on these numbers, the government looks set to lose 11 seats and possibly 13, apart from the Tasmanian result, leaving Turnbull in power but with a small majority. But preference flows from minor party voters could produce some shocks along the way for both parties.

Then the TPP reported by the poll is wrong. Preferences always bias against the incumbent. In the 2013 election, the incumbent government was Labor. In 2016, it’s the Coalition. Preferences this election are going to be more favorable to Labor than they were in 2013.

Any poll that cites a narrow Coalition victory on the basis of 2013 preference flows needs to be taken with a large grain of salt. The swing to Labor is probably at least 1 point better than that poll is suggesting. I’ve still got ‘hung Parliament’ as the most likely outcome.

Moita Natoon
Reply to  a r

A hung Parliament seems likely and that would likely mean a minority Labor government – Labor having a much better record of respecting independent members.

I think it would mean Liberal minority government because they would have more seats this time, and because that nice Mr Turnbull can make nice so very nicely, when he chooses. I’d like to see his government depending vote by vote on some or all of Windsor, Oakeshott, Wilkie, McGowan, and (please oh ye gods) Bandt :).

a r
Reply to  Keith1

I tend to agree. Turnbull has already shown that he’s entirely willing to sell out hid principles in order to hold onto power. I see no reason why that trend wouldn’t continue.

And now that the election has run, vindication. I hope we can get some better polling coverage next time around. Preferences from the past election are completely irrelevant if/when the incumbent government has changed. Either prefer respondent allocated preferences, or manually account for the change in bias from the previous election in your modeling.

I wonder what has caused the last minute sing. I just wish people would read a bit more, even that Peter Martin spice in yesterday’s Age re the dole actually being reduced. Nice folk, this govt.

A hung Parliament will be closely followed by a lynching of Turnbull by the remains of his party… the nutjobs seem to have the safe seats and the prime senate positions..

The last Essential Poll was released on Tuesday, so a 2.5% swing in primary vote intention in 3 days? Really? Either the last poll was inaccurate or this one is.

My dream is of a hung Parliament, preferably from a very high gibbet.