The Liberal Senator was assigned an unwinnable position by his party, but he's not taking it lying down, advertising in the local paper.

Senator Richard Colbeck has gone rogue, advertising for voters in Tasmania to vote below the line in the Senate and to put him first, and inviting them to ignore his fellow Liberal candidates. The Tourism Minister was shunted to fifth place on the Liberals’ Senate ticket, behind Eric Abetz, Stephen Parry, Jonathon Duniam (former Abetz staffer and now deputy chief of staff to Premier Will Hodgman) and David Bushby. Colbeck is followed by John Tucker, and there is not a single woman running for the Liberals in the Senate, and just one contesting a lower house seat in the state.

Colbeck, a Turnbull supporter, put this advertisement in The Advocate, asking voters to “place a number ‘1’ in the box BELOW THE BLACK LINE then at least 2-12 for other candidates of your choice”. The fifth position is considered unwinnable, and Colbeck’s how-to-vote ignores his Liberal colleagues. 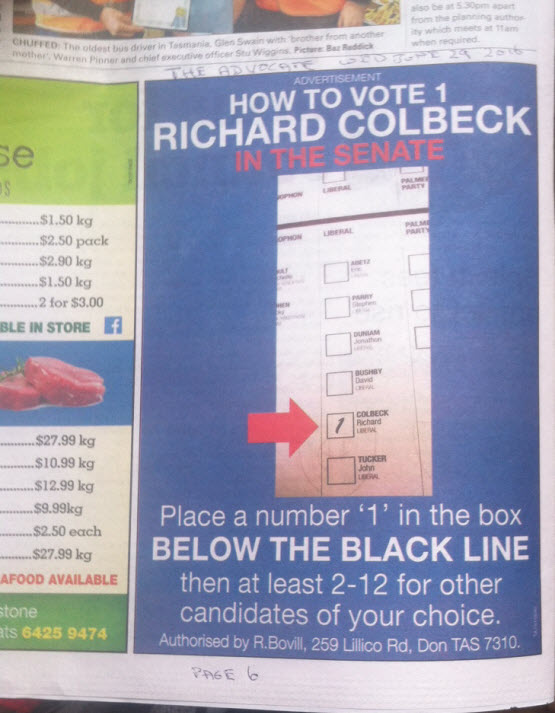 It’s a similar move to the publicity campaign waged by Labor’s Lisa Singh in the Apple Isle, where the Senator has been handing out flyers with her name and photo, but without voting instructions. Singh has also been relegated to an unwinnable position but is attempting to court a below-the-line vote with a concerted campaign.