Razer: the EU itself, not a ‘racist’ underclass, will cause Europe’s downfall

The European Union is an unelected troika and has improved the lives of only select Europeans, especially Germans.

All under heaven is chaos; the situation is excellent. Mao Zedong first uttered something like these words, although it may have been Premier Zhou. Who may have been relating the story of the Monkey King for the amusement of US secretary of state Henry Kissinger. Who may have misunderstood.

Whatever the hurdles of translation — and Kissinger was at least as irregular in his cultural interpretations as Mao was in interpreting Marx — we can probably be certain of one thing: the chairman liked a bit of a mess. He thought it had potential. He’d be pretty happy with the present in the West.

Generally speaking, revolutionaries are fond of disorder, such as that we presently see in the Anglophone world. But so are fascist flunkies, like UKIP’s Nigel Farage or the GOP’s Donald Trump. You don’t seize either the means of production or the faith of desperate people when everything is hunky-dory. You do it when the heavens rain down shit.

That’s the weather report we have long heard from the US, and one we now hear from Britain. A greater proportion of UK citizens live in poverty now than did pre-Thatcher and pre-EU. There are far more low-income earners and far fewer social services to mind that income gap. Farage, a shrewd brute, was happy to exploit this imbalance when he rode about in a Leave bus with “We send the EU 350 million pounds a week. Let’s fund our NHS instead” painted on its sides.

Hours after the referendum, which delivered the nativist Farage the single cruel result he craved, he told Good Morning Britain that it had been a “mistake” to bind himself to that vow. What did impoverished Britons want with healthcare, anyhow? There were more exciting things in store. Such as, Farage said, “re-engaging with the Commonwealth”. Gordon Bennett!

We can be sure that those consigned to die in the housing estates of East Jaywick don’t much care for Farage’s 19th-century fetish. What we cannot be so sure of is that the British underclass is as racist as those nice Bremain people in The Guardian insist. A better NHS was a key promise offered by Leave. Certainly, not all of the 52% were voting for a paler state; just a more liveable one.

There’s been a lot of dogged talk that the EU is progressive and that any attempt to undermine it can come only from the hard right. But if it delivers this “progress” only to a minority, cycling entire nations and classes into debt, then, perhaps, UK voters were pretty justified in asking “what the hell is this EU thing for?”

The EU has delivered prosperity only to select parts of the EU. It’s been very good to Germany, whose export-driven economy thrives on a euro weakened by the member states it bullies into austerity. It’s been terrible for Greece, whose former finance minister Yanis Varoufakis has been predicting a deflationary currency zone “east of the Rhine and north of the Alps” for months. It hasn’t been great in East Jaywick nor for the majority of European citizens, whose commitment to unity Varoufakis promotes out of concern that the entire continent will first serve Germany’s trade surplus, then the gods of racist chaos.

Which is not, again, to say that the UK motivation to vote Leave was necessarily a racist one; actually, a vote to Remain was a vote for a troika itself guilty of exploiting the “lazy and irresponsible Greek” myth when applying its punitive measures to an entire state. And, it is a myth. Greeks work longer hours than Germans, receive a smaller post-retirement pension than Germans, sustain less household debt than Germans and employ fewer public servants than Germans. Greeks are no more crooked Zorbas than Germans are efficient hausfraus, both of which are racial allusions Angela Merkel enjoys making during financial crises.  She may be politer than those thugs in London. But she does pack a far more powerful punch.

Merkel’s profitable EU project is every bit as “progressive” as UKIP’s. And so is her cultural stereotyping. She can and does play the same game as Farage; what has been said in Brussels about Greek laziness and German thrift is no better than the Eurosceptic worst. No better than Trump. But these are the sorts of things that powerful people say in the attempt to contain the chaos under heaven.

Varoufakis, who did urge for Bremain, has been persistent in his claims that without substantial economic reform extended well west of the Rhine, south of the Alps and into all the housing estates of Britain, the racists will win Europe. I’m pretty convinced by this, although less by his claims that the EU can itself be radically democratised. Still. At least he’s giving it a go, unlike the bulk of Remain commentators who seem convinced that an immoral, racist underclass will be the downfall of Europe and not, as is the case, an elite, unelected troika.

To say that you can contain the present chaos by improving the morals of everyday people is as unrealistic as saying that the expulsion of foreigners will produce a better nation. This contest, which is currently being fought by the moralising Clinton and the nativist Trump as much as it is in Britain, is a false one. On both sides, you have the view that getting rid of a certain type of person will end all the chaos. Varoufakis is one of a few who want to see the end to a certain type of economic structure, such as that upheld by the troika.

You can’t ethically get rid of people, even the bigoted ones. And you’ll never get rid of a certain volume of human chaos. What you can get rid of, however, is the view that chaos, of an inevitable and economic type we are yet to see in Australia, can be met with easy answers. And get rid of the curious idea that it is somehow easier to change or expel millions of “bad” people than it is to shift economic gears.

In our nation, we can take what we have learned from this chaos and its hopeless rejoinders, which have been even more effectively racist in the suites of the ECB than they have on the streets of London, and reset. We can look for an answer more complex than “we need to get rid of the undesirable people”, whether these are people perceived as too bigoted or too deserving of bigotry; too homophobic or too gay; too racist or too foreign. There’s some Mao-pleasing potential here. We can take this chaos and move on.

That situation would be excellent. 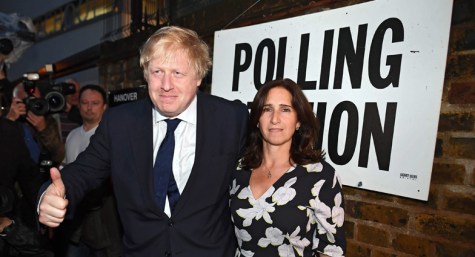 Rundle: Brexit would spell the end of the British Empire

It’s a tabloid-like cheap shot to accuse Farage of being fascist? Wheres the compelling evidence?
Oh of course it’s in the faux liberal UK Guardian, and other likeminded UK State sponsored media, who’ve been in full character assassination mode leading up to the vote. Next you’ll be telling us that Enoch Powell was a fascist.

Farage is a visionary who has for the past 16 years played a key role in facilitating the greatest geo-political upheaval since 1945. And in doing so he’s opened the door for similar moves in other EU countries, which will hopefully lead to the speedy dismantling of the EU, and therefore the current unfettered power of Brussels and the ECB, and their criminal bankster mates at the US Federal Reserve & the Bank of England.

This is hopefully, the first small step to replacing the current oligarch-owned Tory & Labour Party MP’s who’ve taken their master’s shilling for the past century or so. The emerging bloodbath in Labour’s parliamentary wing will be very enlightening indeed, as will the Tory contest.

Finally, Farage’s EU Parliament speech was a masterful study in ‘up yours’ political gloating….a real David & Goliath moment which is clearly one of the my personal highlights for 2016 to date.

Good work not even reading the damn headline before commenting, let alone the article.

Why do you hate free speech, Draco?

You’re obviously smarter than me Draco…I actually read this article (or most of it anyhow) before giving up. And no, it’s nothing to do with hating free speech Helen, it’s hating the waste of time reading such nonsense; if I wanted such ill informed and biaised critiques of the EU I’d have subscribed to a News Ltd tabloid.

Hi, P. I can’t do anything about your view that I am ill-informed, other than say “no, I’m not!” Which is just embarrassing for everybody. But, I can say that there is, to my knowledge, no News Corp publication that would publish this view, which is as impatient with the EU (if my take is too ill-informed, I suggest Varoufakis’, Tariq Ali’s or Mark Blyth’s more credentialed but nearlt identical ones) as it is with UKIP.

Perhaps ill informed was wrong; I’ll replace with narrowly informed, given the “more credentialed” sources you cite. Ali and Blyth are articulate commentators and I’m certainly not an austerity advocate myself. However, having lived and worked in the EU, for extended periods, over the past 4 decades I have a significantly more positive and I believe more balanced perspective.

I for one think this is a good article with which I have much to agree. The only problem, not with the article but with the characters within is that Farage, while being a classic far right populist is pummeling all the tender points of a laissez-faire/neocon world view which, as Helen has noted, is furthering a few at the expense of the many. Hence his popularity. I don’t like him nor do I like Trump but the problem with both is that their adversary is far, far worse.

Yes, GOS. There is a reason that many Republicans have thrown their support behind Clinton, and it’s not Trump’s racism. It’s her commitment to the finance sector. Still, I don’t know if we could say that anyone is worse, other than the fact that the apparently liberal neolibs are very good at dressing up their belief in inequality as tolerance. (Probably even to themselves.) Many persons seem to believe that ugly speech should be avoided at all costs, even if that means allowing ugly policy to play out in real lives.

If MzRaz were even ill informed it would be a vast improvement on this fact free, overlong preamble to a content void.
I try to read her output but usually the sheer fatuity of the opinions overwhelms before I reach the end.
Which is a pity because, occasionally, she can make a valid point and those rare occurrences are never when her prolix verbosity is unleashed.
Less is more.

I don’t read or watch the mainstream media at all, yet I’ve come across that assumption a frightening number of times.

Brexit could be a good thing for the British people, if its rulers obey the referendum and IF they shake off Neoliberalism: if they don’t do the latter, the British people will be punished for bucking a system that made so much money for so few.