They’ve checked their last fact. ABC Fact Check shuts down today, after the funding for it was cut in the last budget. In its last hoorah, it tallies all the statements it has checked this election, and all the politicians who took notice … Where oh where is Melissa Price? The Liberal member for Durack caught our attention yesterday […]

They’ve checked their last fact. ABC Fact Check shuts down today, after the funding for it was cut in the last budget. In its last hoorah, it tallies all the statements it has checked this election, and all the politicians who took notice … 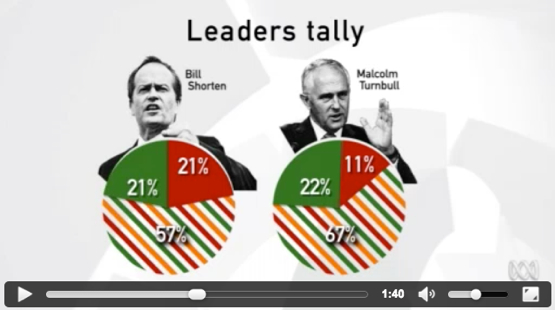 Where oh where is Melissa Price? The Liberal member for Durack caught our attention yesterday when her office refused BuzzFeed’s repeated requests for an interview because she was “very busy” and “doesn’t really give interviews to online forums”. BuzzFeed had wanted to speak to her about indigenous affairs — her electorate has the third-largest indigenous population in the country.

It’s a curious reason to refuse an interview, and not the only odd one from Price this election. The Wall Street Journal‘s Rob Taylor also asked for an interview. His piece, carried on The Australian, has the line:

“Her office said she would be unreachable for the duration of the campaign.”

We wondered whether Price had done any interviews at all, but Isentia says she has. She’s given six interviews on ABC radio this campaign, and no interviews to TV. She has a margin of 15.2%. — Myriam Robin

NBN flexes its fibrous muscle. NBN, on a national level, is all about politics. For local newspapers, though, it is all about when their area will get the NBN, and complaints about not getting the NBN as fast as they’d wanted. NBN, in what appears to have been the first time the government-owned company has taken a case to the Press Council, complained about two such articles appearing in the regional independent newspaper Tully Times from October and November last year.

The first article quotes only a local businessman from the Cassowary Coast area about his views that people in the area will not get fibre or wireless NBN, and will instead be stuck on the satellite service, which he said could be oversubscribed. In the second article, journalist and owner of the Tully Times, John Hughes, said he had taken calls also complaining about the NBN, and noted a “response blackout” from politicians and NBN about the article.

“The responses could be still in the mail,” he said.

NBN complained to the Press Council that the articles were misleading and not balanced because the articles relied on the one opinion, and no comment had been sought from NBN. Responses were sent, but were not published. In response, the publication said that it didn’t go to NBN’s media representative because they wanted “a response from a qualified technician on behalf of NBN” rather than a spokesperson.

The Press Council said today that Tully Times should have sought comment, but said the factual inaccuracies in the articles “were not major ones”.

Hughes died of a suspected heart attack in May, and it is unclear whether Tully Times is still publishing. — Josh Taylor

Axe falls in the West. The ink has barely dried on Seven West Media’s acquisition of News Corp’s Sunday Times, but the company has already announced job cuts to staff in bid to deal with the tremors of Australian publishing.

“An unstable economic environment and changes to the media industry have presented many new and greater challenges for our organisations,” he said in the staff email,” West Australian Newspapers chief executive officer Chris Wharton told staff in an email yesterday.

“As a result of those challenges, we face increased pressure to transform the way we operate to secure our future.

“It is imperative that we effectively manage our costs to ensure long-term viability and growth.

“Every effort will be made to redeploy affected staff to other positions across the business, however opportunities will not be able to be found for everyone and some employees will end their employment with us.”

The email was short on details. It’s not clear what positions are being affected, or how many staff could go. Downsizing usually follows mergers, but rarely this quick. After all, the whole deal is still subject to ACCC approval.

In its submission to the ACCC, the media union said the merger would create a one-paper town, and greatly reduce media diversity in Perth. It urged the regulator against the acquisition, saying other ways could be found to cut costs for both publishers without both Perth papers being owned by the one company.

“We believe the sale will lead inevitably to job losses for our members and increased workload for those that remain in the Editorial sections of the consolidated operation,” it read. The ACCC is due to release its position on the merger on July 28. — Myriam Robin

Footy Show bombs in Melbourne. If the Nine Network wanted the opportunity for revamping the AFL Footy Show to bring it into the 21st Century by ridding it of the pernicious influence of Sam Newman (and perhaps Eddie McGuire and his mate, James Brayshaw, the current host), then the collapse in the audience in Melbourne for last night’s episode provides ample reason enough to move. The program averaged just 163,000 viewers in Melbourne’s AFL heartland last night.

Melbourne is its most important market — Nine’s mantra has been that if the program was rating well in Melbourne, then all was well and there was no need to change. Not after last night.

Back on May 12 it had 320,000 viewers. Since then we have had the Eddie McGuire and James Brayshaw belittling of Age sports journalist, Carline Wilson, and then Sam Newman’s ignorant sledging of Wilson on last week’s program, a performance that earned him widespread condemnation for the level of its crudeness.

Last night’s 163,000 is believed to be one of the lowest recorded in Melbourne in the program’s time on air. Certainly it was the lowest for two years after the 162,000 seen in September, 2014. That was after Sam Newman exposed himself on the program that went to on August 7.

Sam Newman and to a lesser extent James Brayshaw have become toxic for the program’s future success. Nine will of course wait and won’t panic. It will want to see how future ratings for the program go in coming weeks.Of course they could very well rebound, but TV viewers in Melbourne have sent a big warning to Nine that they are no longer loyal and rusted on viewers of the Footy Show. — Glenn Dyer

Britons feel the pain. In London, Trinity Mirror is chopping jobs at its national titles, led by the Daily Mirror. The losses could be a minimum of 15 editorial positions, but will probably end up higher given the continuing slide in revenues.

The 15-plus jobs to be cut represent the third round of redundancies in the past 13 months; 28 production jobs were lost last October from the Daily Mirror, Sunday Mirror and Sunday People, while 27 editorial positions were abolished in May of last year. London reports say journalists are blaming the losses on the costs Trinity Mirror took on to launch and then kill off the New Day paper earlier this year. But other reports say the cuts had been planned for a while and were a reaction to the continued falls in newspaper sales and print ad revenues, which have been running at 15% to 20% this year. — Glenn Dyer

Video of the day. The Prime Minister almost got photographed in front of one of those “Fizza” posters yesterday. Thankfully, his advancers were there to cover it up. An ABC cameraman got this video of them doing it … 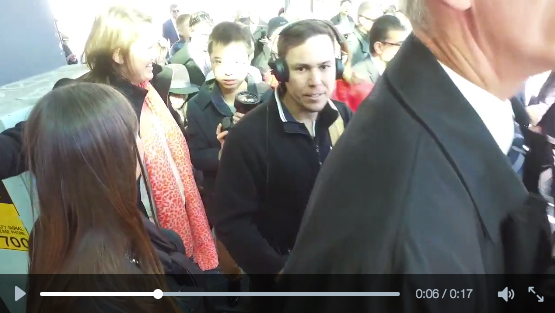 I’m no fan of the Footy Show, but surely the reason it suffered in the ratings last night was moving to a Wednesday night to avoid clashing with the rare Thursday game tonight. Probably a bunch of casual viewers never realised/remembered it was on?

Maybe more of the Liberals should have been “unreachable for the duration of the campaign”: The ABC has Melissa Price retaining Durack with a 15.7% swing TOWARDS her. http://www.abc.net.au/news/federal-election-2016/guide/dura/