Isentia index: More coverage, more comment, but is there any more enthusiasm for either party in the last week?

We stagger towards the finish line of this incredibly long election campaign.

Opposition Leader Bill Shorten has continued to receive plenty of blowback in the media for the ‘save Medicare’ campaign, but you’d have to think it is doing damage to both sides, reaffirming the, perhaps briefly forgotten, cynicism of Labor Party election tactics, while also putting uncertainty in many voters’ minds about how pure the Liberals will be when it comes to supporting public health.

Brexit has been seen by most of the media as a clear help to the Coalition in the final days of the campaign, them being the likely benefactors of any desire for stability brought about by the global financial wobble that followed the surprise UK vote to leave the EU, although others felt it was yet another indication that the usual rules just don’t matter in the Anglosphere democracies circa 2016.

Treasurer Scott Morrison jumped to third as he released the Coalition’s full budget costings, and Labor’s Chris Bowen to ninth after Labor’s costings, with both revealing a few nasties plus the usual claims of greater fiscal responsibility than the other, while Julie Bishop received very positive coverage for her launch speech and also got Brexit mentions.

The one certain thing about this week’s top 20 list? Clive Palmer won’t be on it next week. 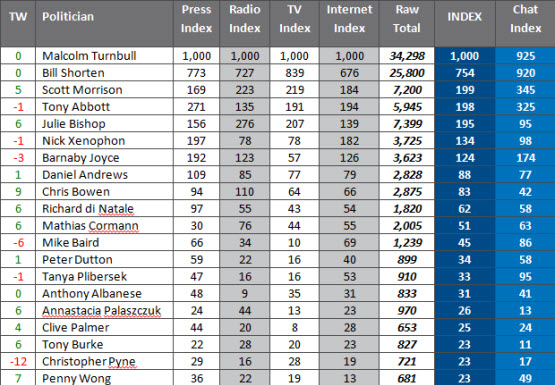 Extraordinary as it is, the Member for Warringah is still a social media ‘favourite’, a lot of it about his appearance at the Liberal launch, many of his online critics adopting a lest we forget attitude.

Bill Shorten copped plenty of criticism about those Medicare claims on talkback over the past seven days, but love for Malcolm Turnbull also remains far from universal, whether commercial or ABC station. 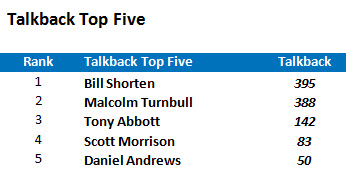 *GoT spoiler alert* So, after all that mistreatment of women and marginalisation of female characters, in the end it looks like Game of Thrones will come down to a battle between two strong women…at least until the undead sweep through and wipe them all out, of course…