As a registered charity, the Australian Christian Lobby is not supposed to target political parties or candidates. Yet it is attacking Labor in a new pamphlet drop. Freelance writer Kate Doak investigates.

The Australian Christian Lobby is again mired in controversy, as the organisation is handing out flyers targeting the Labor Party, which could be in contravention of the group’s charity status.

The flyers, which were authorised by managing director Lyle Shelton and handed out in partnership with similarly anti-gay group Marriage Forum, include the Australian Christian Lobby’s registered head office address of “4 Campion Street, Deakin ACT 2600”. They have been handed out in Canberra, South Australia, Sydney and Melbourne, and attack “Labor’s plan for education” as “gender-bending political correctness like The Gender Fairy”. They go on to say “Labor plans to make this worse by reintroducing the controversial, $8 million so called ‘Safe Schools’ program”. 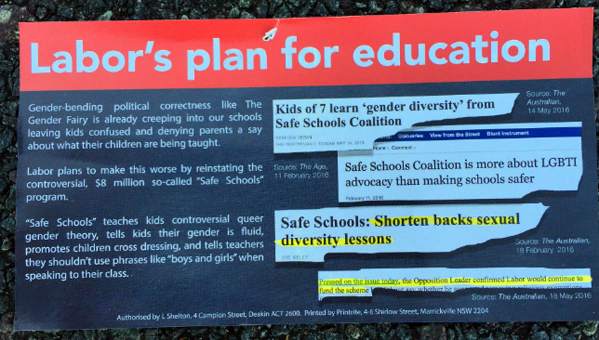 This appears to be a direct contravention of the ACL’s status as a charitable organisation, according to the Australian Charities and Not For Profits Commission. An ACNC spokesperson said the commission had extensive guidelines for addressing potential breaches of “charitable purposes” regulations by charitable organisations, with complaint forms and information available to the public online.

While a charity may express views in relation to some policy discussions, such expressions can only be in relation to the charity’s specific charitable purposes, said an ACNC spokesperson.

The direct attack on the Labor Party could be problematic for the ACL. And that’s not the only potential legal hot water. The flyers include a picture of the front cover of The Gender Fairy, a book by Jo Hirst. Hirst told Crikey the ACL did not ask to use the image and that she was considering seeking legal advice in relation to the protection of her intellectual property and reputation. 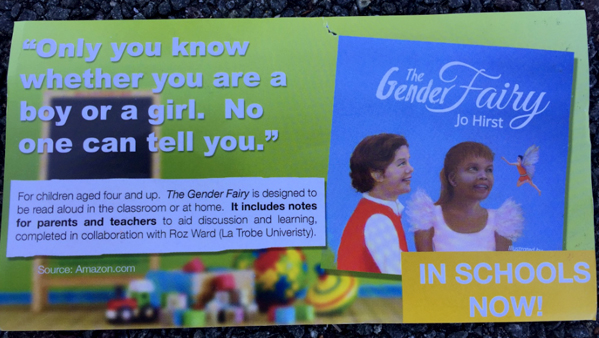 Last weekend Shelton engaged in a Twitter feud with Crikey’s own Bernard Keane and Labor member for Moreton, Graham Perrett, over the flyers.

Shelton made the point that gender theory and sexuality should not be taught in schools, which Perrett said implied teachers were not qualified to make decisions around appropriate lessons for their students. Perrett pointed to “’play’ beheadings”, a reference to Christian religious instruction program Connect. The program also teaches children to mix bleach with cordial. 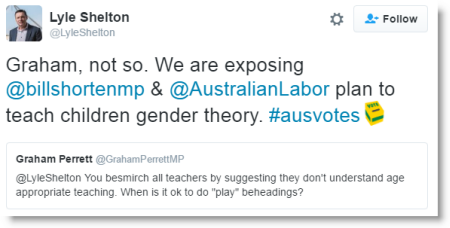 Crikey has approached both the ACL and Shelton for comment but did not receive a response before deadline.

Is Crikey going to put in an official complaint to the ACNC?

All those dollars they’re saving by not paying tax they can afford to splurge and indulge their leader’s political fantasies?

God and Jesus would not be happy with the intolerant ACL happy clappers.