Ricky Muir: I’m not going anywhere. Accidental Senator Ricky Muir gave perhaps one of his last addresses as an elected official yesterday, telling the Victorian Rural Press Club that he wants to stay in politics in some way or another after this Saturday’s election. He delivered a rambling speech that showed that three years in Canberra hadn’t scrubbed the Gippsland boy out of him. Muir said he hadn’t written a speech, because it was too obvious when his fellow politicians hadn’t written their own speeches and didn’t know which words were coming next. He weighed in on the CFA dispute, which has torn apart the Labor Party in Victoria and dominated the political debate in the state. Muir said that he had not expected the issue to become such a big part of the election campaign and had mixed feelings about the Prime Minister’s promise to change the Fair Work Act to protect CFA volunteers:

“For someone who has come from a blue-collar background in a rural area I get very nervous when a Liberal government starts talking about amending the Fair Work Act. Volunteers need to be protected, I completely agree with that, and I completely hear their concerns and this is an issue that has to be resolved now.”

He also gave the state Labor government a whack, saying: “I would like to use this opportunity to put pressure on the state government and say just sort this out now”.

Brothel owner still a candidate. The Liberals have dumped John Hsu as their candidate for the seat of Calwell after it was discovered that he owns a brothel in Frankston that he neglected to tell the party about, but that doesn’t mean that Hsu has given up hope of getting elected. Hsu ran this advertisement in the Hume Leader newspaper last week, which emphasised that he’s been a small business owner for the last 10 years (just doesn’t mention the industry). The advertisement has similar policies to those of the Liberal Party, but running as an independent obviously allows Hsu some freedom — he promotes himself as a motoring enthusiast and wants a safer neighbourhood, with “less fines but more safety and security!”.  He’s also promising jobs and growth in posts on Facebook. 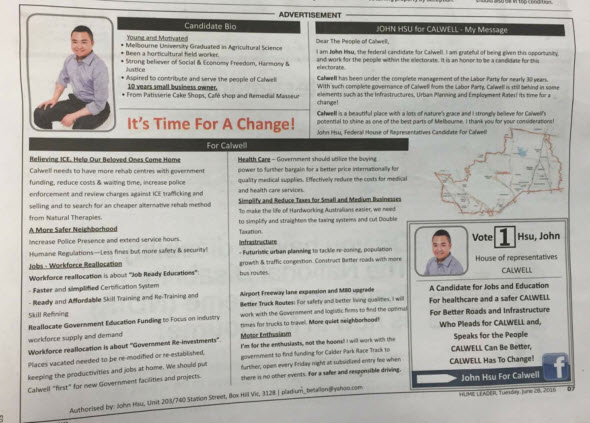 With friends like these … Former prime minister Tony Abbott has kept the sniping and undermining to a minimum this election campaign, focusing on his seat of Warringah as well as travelling to different party events around the country. Now voters in his seat are getting special attention from Prime Minister Malcolm Turnbull to encourage a vote for the man he pushed out of the top job.

“Your electorate of Warringah has been targeted by Green and other activist groups to encourage a protest vote against my colleague  Tony Abbott.”

“Your protest vote, be it directed to Labor or Independent, could inadvertently deliver Bill Shorten as PM. That’s a recipe for chaos.”

It’s been reported today that the Liberals are concerned about Warringah — not that Abbott will lose the seat he holds by 15%, but that there will be a significant swing against him, in a field with 10 candidates. 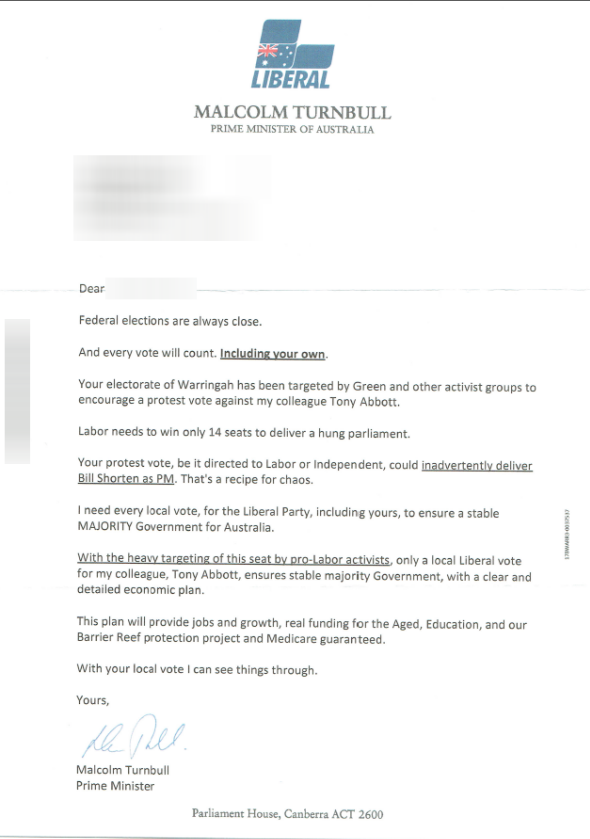 Get those tax deductions. It was Kerry Packer who said that anyone who wasn’t minimising their tax should get their head read, so the Sydney Institute has emailed its friends and followers to say it “is happy to accept donations in the period between the Winter Solstice and the end of the Financial Year 2015-16” in a cheeky little note on Tuesday. The email from Anne Henderson also said that “even UK pounds (post Brexit) gratefully accepted”. We’re not sure how that will go when trying to claim a tax deduction in a few weeks, though.

Bomb shelters and parachutes. Innovation Minister Christopher Pyne was in fine form on Channel Ten’s The Project last night, extolling the joys of wearing a knitted vest while calling voters and the achievement of mowing the lawns. News Corp political editor Samantha Maiden also praised Pyne, saying that he would be on her “bomb shelter list”:

“If you were going to be bombed or die, he would be on my bomb shelter list because he would be enormously good company and he has such a survival instinct that he would call in air support, pull out a rusty knife to fight off attackers. As long as you could actually hang on to the parachute and he didn’t flick you off, you’d live.”

It’s quite the endorsement and got us wondering which politicians we would want in our bomb shelter. If you have a creative answer about who you would have in your bomb shelter and why, drop us a line, and we’ll publish the most interesting ones over the next few days.

85 cents on the dollar. We’ve been waiting patiently for some creative flyers that aren’t homophobic or dank memes, and the Maritime Union of Australia has delivered, with $85 notes they say are “as useless as Malcolm Turnbull”. While the anti-Coalition message isn’t anything new, the notes handed to voters in Melbourne features poetry about Scott Morrison’s black holes, superannuation and rotten tomato policies.