Malcolm Turnbull is trying to urge voters to support stable government, when his own leadership could be endangered by the same-sex marriage plebiscite.

Pro tip for political parties: when you focus your climactic election pitch on stability and unity, it’s probably not a good idea to then publicly put your fundamental divisions on display in the days immediately afterward.

But there Treasurer Scott Morrison was last night refusing to say if he’d vote to reverse the Howard government’s 2004 ban on same-sex marriage in the event of a plebiscite endorsing marriage equality. He’d “respect” the outcome of the plebiscite, whatever that meant, but evidently it didn’t mean voting for it, because otherwise he’d have said that under repeated questioning from his interviewer. Morrison, a hardline Christian who belongs to the Hillsong sect, strongly opposes same-sex marriage and has compared criticism of his views on the subject to homophobic abuse levelled at LGBTI people.

Deputy Liberal leader Julie Bishop found a different way to walk away from the plebiscite result, saying she would “respect the outcome” but flagging that she would interpret the outcome in her own way, “how it is broken down and what it looks like state by state, electorate by electorate and then, of course, it will depend what the legislation looks like.”

Remember, these are the two most senior figures in the Liberal Party after the Prime Minister, who is on record as outright opposing a plebiscite and who, when challenged, has lamented that he has to lead a cabinet government and can’t dictate policy.

The Liberals’ stance on a plebiscite could be the first time a party has taken a policy to an election that literally no one in the party supports. At least John Howard’s policy for “the world’s most comprehensive emissions trading scheme”, which he took to the 2007 election despite not believing in climate change, had some support within the handful of Liberals who thought climate change was real. But same-sex marriage supporters within the Liberals don’t support a plebiscite; same-sex marriage opponents say they’ll ignore the outcome entirely and continue to demonise LGBTI Australians, the Prime Minister himself disagrees with it, and his two most senior ministers refuse to say that they, too, won’t ignore the outcome.

The plebiscite had its genesis in one of Tony Abbott’s many prime ministerial stuff-ups. Inexplicably caught out by the heavily flagged introduction of a bill enabling same-sex marriage by his own backbencher Warren Entsch, Abbott hastily crafted a “disposition” for a plebiscite as a compromise between the majority of same-sex marriage opponents in his party room and a smaller number of supporters, having co-opted the Nationals — who mostly oppose it — to back him up. Intended to give him some breathing room as his prime ministership collapsed, the manoeuvre merely generated bad blood and hastened Abbott’s demise.

Like many of Abbott’s blunders, however, this one left behind a deadly level of radioactivity that has made life much more difficult for his replacement. Turnbull has been unable, or unwilling, to articulate the details of the plebiscite: what question will be put to voters, when it will be — before the end of the year, possibly, but that isn’t clear — and whether opponents of same-sex marriage will be giving public funding to attack LGBTI couples. The link between the plebiscite and the legislative process is also unclear. All we know from Turnbull is that even cabinet members — normally expected to vote in support of the government’s position or resign — won’t be required to back the legislation.

[Abbott’s same-sex marriage plebiscite might not happen after all]

The $160 million poll isn’t over some triviality like the national song. The primary opposition case will be based on an extended attack on same sex, single and adoptive parents by religious groups claiming that anything other than parenting by biological, heterosexual parents harms children, despite a complete lack of any evidence for that.

Moreover, as Liberal opponents of same-sex marriage have indicated, they will still continue to try to thwart legislative change even if voters back it. Morrison also raised the stakes yesterday by claiming that there should be no further discussion of legislating same-sex marriage if the plebiscite does not garner majority support. What that “majority” consist of is, thanks to Turnbull’s obfuscation, unclear; as Bishop indicated, the “outcome” could be interpreted in any way an MP thinks.

[How Coalition homophobes could set marriage plebiscite up to fail]

Turnbull’s inability to either reverse course on the plebiscite, or to spell out a way forward, reflects the accuracy of Peta Credlin’s suggestion that the issue could explode his leadership, 2009 style. But his loss of the leadership in 2009 was brought about by his own policy decision on climate action in a split party; this time around, he’s a prisoner of the decision of his predecessor. And unless he achieves an impressive win on Saturday — something current polls suggest is unlikely — he’ll be even more hostage to the religious right of his party after the election than he is now.

Despite the overwhelming support for same-sex marriage in the community, it’s not the kind of issue that shifts votes. But the signals Turnbull’s handling of the issue send to the electorate directly contradict his core message. The Liberals are badly divided on same-sex marriage, and it’s the kind of division that could cost Turnbull his job. And that’s funny kind of stable government.

Update: After a torrid media conference this morning in which the Prime Minister was pressed for details of the plebiscite, his office has since stated that the plebiscite will consider to have been passed with a simple majority. 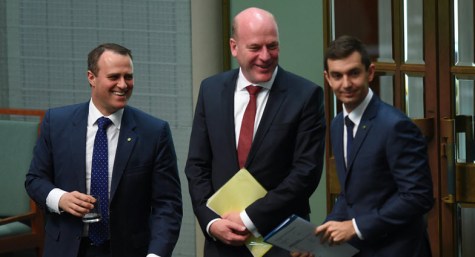 A short history of the conscience vote (and could it work again to pass marriage equality?)

I loathe Morrison and all he stands for but I wouldn’t automatically accept the plebiscite result either. Marriage equality is about human rights not public opinion. MPs should vote for it whatever the result of this ridiculous plebiscite.

Turnbull stands for nothing…. He once accused Howard of being the Prime Minister that broke the nations heart…Take a long look in the mirror Malcolm..

Well, I cannot get access to that article unless I subscribe to the Herald Sun, which is highly unlikely, so I cannot check up on who was polled. Are you sure if you got the yes and no results the right way around?

The plebiscite is non-binding, so there’s no point in wasting 160 million on a non binding opinion poll.
There are plenty of other polls, one even taken from Christians, all of which show strong support for marriage equality. One Herald Sun poll, doesn’t change that.

It’s a poll of Herald Sun readers, so heavily skewered.

You mean skewed, but for the readers in question, your word is near enough..!!

If Turnbull wants sympathy he can find it in the dictionary.

Good article, Bernard…Crikey must be one of the few media outlets telling it like it is, at the moment.
The MSM are giving the impression that all is well in Talcum-land, which is clearly NOT the case.
I hope this plebiscite lunacy comes back to bite them!