It might feel like we’ve been saturated with election coverage for the past seven-plus weeks, but actual talk about the two men who could be prime minister after July 2 is down compared to three years ago, and we’re less engaged with it — despite the longer campaign.

Media were on board the Bill bus, travelling across Australia to all the innovative and agile businesses with Malcolm Turnbull, on the wombat trail with Barnaby Joyce, and out in the inner-city seats the Greens are trying to snap up. There were three debates, portfolio debates at the National Press Club, numerous town halls, shopping centre walkthroughs, one sick prime minister, and the media along to record every single moment, with live blogs, Snapchat updates, Facebook live video and endless copy and news reports.

Sky News has a dedicated election channel, and it began counting down the days until July 2, 40 days out.

Shorten in his final National Press Club address before the election paid tribute to the media for sticking along for the ride:

“For your encouragement and your discouragement, your support and the breadth of your hindsight. Hello again to all of you who have travelled on the Bill bus at some point in these past eight weeks and for those of you who kept a safe distance, too.”

It might feel like the campaign that never ends, but the longer campaign has not led to an increase in media coverage of our politicians, according to Isentia.

By the end of the 2013 election (which was much shorter than the eight-week campaign we’ve all suffered through) there had been 286,569 mentions of then-opposition leader Tony Abbott across press, radio, TV and online, and 283,819 mentions of then-prime minister Kevin Rudd. As of yesterday, there were 279,004 mentions of Turnbull, and 242,575 mentions of Shorten.

A spokespeson for Isentia told Crikey that there had been a significant drop in volume of talkback calls and social media engagement with the election, pointing to a lack of passion and interest from the general public. Often the top issues in the media that week were different from the top issues being discussed on talkback and on social media.

This is not to say that voters are not hearing about the election. As of this week, close to every second ad during the evening news on commercial TV is from one of the parties, unions, or interest groups about the election. Essential this week reported that close to three in four voters say they’ve seen a TV ad this election from a political party, followed by mailouts, emails, and phone calls.

Just one hour after Turnbull said yesterday “what political parties say they will support and oppose at one time is not necessarily ultimately what they will do”, Labor produced a scare ad warning of Turnbull backing down on his promises if he wins the election. 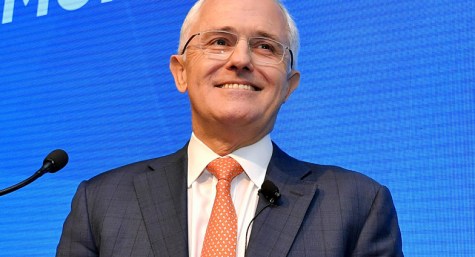 This election may be painfully long but the 2010 campaign – Gillard vs Abbott – still takes the cake for the most tedious & lacklustre. To the point that Australia decided they wanted neither as PM – Windsor, Oakeshott & Katter chose on our behalf.

I’m dreaming of a minority government – given that Talcum & Shortarse have both sworn not to co-operate with Indies or Greens.
Windsor for PM, Oakeshott for DPM, Bandt for Treasurer and Katter for … umm, Immigration?