Rupert loves Brexit. In his first public comments on the event his tabloids had a role in bringing about, American citizen Rupert Murdoch said the Brexit vote was “wonderful”, a “momentous decision” on “who we are”. The widely-reported comments were made at an invitation-only business in London hosted by The Times (which backed Remain) yesterday. “[Brexit was] […]

Rupert loves Brexit. In his first public comments on the event his tabloids had a role in bringing about, American citizen Rupert Murdoch said the Brexit vote was “wonderful”, a “momentous decision” on “who we are”.

The widely-reported comments were made at an invitation-only business in London hosted by The Times (which backed Remain) yesterday. “[Brexit was] a bit like a prison break,” the media mogul said. “We’re out!”

Murdoch has long been seen as a sceptic on the European Union. Veteran Fleet Street journalist Anthony Hilton wrote in the Evening Standard (published by rival Trinity Mirror) last Friday he “once asked Rupert Murdoch why he was so opposed to the European Union. ‘That’s easy,’ he replied. ‘When I go into Downing Street they do what I say; when I go to Brussels they take no notice.'”

Most British papers supported the Brexit side of the argument. Yesterday, British media analyst Ian Whittaker said in a report that the British press would be boosted by the result.

“In the short term, it should help boost circulation revenues given the coverage given to the Brexit vote and its consequences; and in the medium to long-term, the Brexit vote — where most newspapers supported a ‘leave’ vote — will be taken as a demonstration of how much influence newspapers still have, which is a persuasive argument to use with advertiser.”

End of election ads. Free-to-air television lobby group Free TV Australia has called for an end to the “outdated advertising blackout” that prevents them, along with radio networks, from airing election advertising in the three days before a federal election.

From midnight tonight, TV and radio networks will no longer be allowed to air election advertising, due to provisions in the Broadcasting Services Act that legislate a “cooling off” period.

But the legislation doesn’t cover anything but TV and radio, which means all that happens is political advertising moves to other platforms, says Free TV’s chairman Harold Mitchell.

“We all know that from midnight tonight the political parties will simply transfer their advertising from television to other digital media platforms that are not regulated, such as digital news media sites and social media. For example, online news sites will be plastered with wall to wall political advertising, including video ads.

“We are calling on the new Parliament to get rid of this outdated provision which only serves to put commercial broadcasters at a disadvantage to all other digital media.”

“The rules are yet another example of the failure of successive governments to keep pace with changes in technology and consumer behaviour”.

Given so many people pre-poll vote nowadays, the blackout is “more meaningless than ever”. Australian Electoral Commission figures at the start of this week revealed 1.5 million votes had already been cast.

The free-to-air networks lose a lot from the ban. Because TV is watched by a broad cross-section of society, including many swinging voters and those in marginal seats, political parties pour money into television advertising. But not in the final three days. — Myriam Robin

Losses continue apace. The pace of losses in the American newspaper and magazine publishing industry accelerated in the three months to March 31, according to data from the US Census Bureau.

This data used to be issued by the Newspaper Association of America and the Publishers Information Bureau (broken down into data for ad revenues by type and newspaper and magazine sales). But both stopped publicising this data three years ago.

The first quarter falls in revenue underlines that nothing is growing for newspaper and magazine publishers, especially digital ad and circulation revenues, or rather not growing fast enough to offset the slide in analogue print ads and sales revenues.

Branded content on SBS? Will SBS’ new Viceland channel, airing on what’s now SBS2, cause SBS to radically change the type of advertising it airs?

The announcement said the new channel would be ” owned and operated by SBS”, suggesting the agreement with Vice is just a content licensing deal. But an interview on Adnews suggested it could have something to do with advertising as well. “Advertising on Viceland will be completely different to what people are used to seeing,” Vice strategic planner Alice Kimberley is quoted as saying, in a piece exploring how traditional TV ads don’t work with millennials.

Whether or not SBS is allowed to air non-traditional ads is the subject of some ambiguity.

When former communications minister Malcolm Turnbull introduced the SBS ad-averaging bill last year, he said one of the aims of the legislation was to provide clarity around how such in-program ads could work:

“SBS currently broadcasts acquired programming which already contains product placement from agreements made to the benefit of third parties, prior to SBS’ consideration of the program.

“However, SBS does not use product placement in its own commissioned programs due to a lack of clarity in the SBS Act regarding its use. A significant portion of SBS’ prime-time schedule, of course, does not lend itself to integrated branding such as Insight and other documentaries. However commissioned food and sport programming, for example, can provide opportunities for branded content.

“The bill amends the SBS Act to specifically allow SBS to earn revenue through having product placement in its programming. It also requires the SBS board to develop and publicise guidelines regarding the use of product placement and report on its use and earnings in the annual report. The same requirement exists in the SBS Act for the use of advertising and sponsorship announcements.”

Viewer lobby group Save our SBS was opposed to this clause (and the bill as a whole), saying that unless any provisions were included in the formal code of practice (as opposed to simply in guidelines), viewers wouldn’t be able to complain about the operation of such placements with the Australian Communications and Media Authority. The bill was defeated in in the Senate. — Myriam Robin

Front page of the day. Yesterday’s guilty verdict for corrupt former NSW Labor politician Eddie Obeid is a victory for voters, and for the Independent Commission against Corruption, The Sydney Morning Herald’s editorial declares this morning. Of course, it’s also a victory for the SMH and its investigative reporter Kate McClymont, who has been intimately involved in the SMH’s investigations into Obeid for more than a decade. The editorial states:

“Four years ago reporters Kate McClymont and Linton Besser exposed [Obeid’s] corrupt actions over the Circular Quay cafes. Obeid has used a defamation trial to try to silence our reporters. As such this verdict stands as a victory for investigative journalism that will not cower to ideological attacks, political pressure or financial threats.” 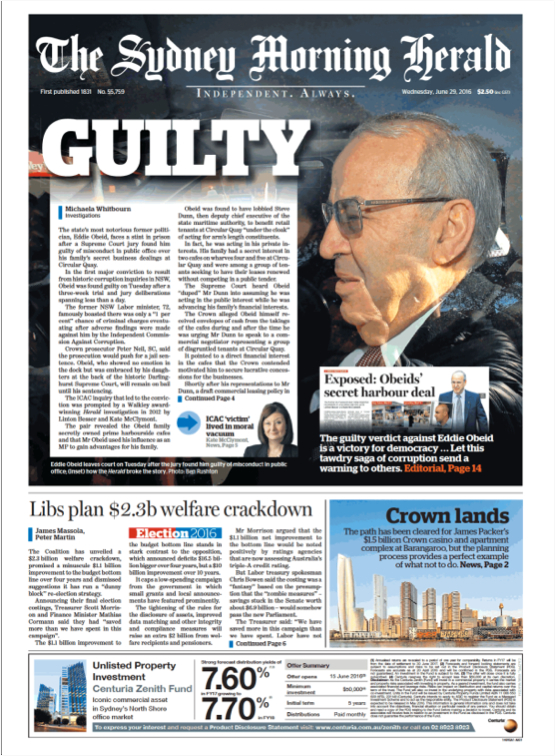