Just a few days short of the election, and the battle between the Greens and Labor to win the inner-north Melbourne seat of Batman is getting ugly, dragging in the local council ahead of council elections in October.

As Crikey has previously reported, recent polling in the electorate suggest that serial Greens candidate Alex Bhathal could cause an upset in the electorate of Batman and unseat first-term MP and longtime Labor powerbroker and former senator David Feeney on Saturday.

Two former Labor-aligned councillors from Darebin Council have endorsed Bhathal for the seat, as the Greens attempt to win over some of the Italian community vote in the electorate, always viewed as Labor’s core constituency.

Darebin councillors Gaetano Greco and Angela Villella (who last year released an Italian cookbook) have said they will not be voting for for Labor MP David Feeney in a joint flyer distributed in the area in Italian and English.

“Unfortunately, the current member, David Feeney has been both a disappointment and an embarrassment,” the flyer reads.

Villella told Crikey that Labor had taken Batman for granted.

“I’ve always had a problem with safe Labor seats. I feel the community is often ignored and taken for granted. Topped off with the fact that David Feeney has neglected the electorate and has been an embarrassment and a disaster during the campaign, and previous to the campaign,” she said. “As a councillor, I look at the needs of the community, and Labor’s not delivering because it is taken for granted.”

Villella says she is not concerned about potential blowback from Labor at the upcoming council elections.

“Labor won’t be happy, won’t be embracing my actions, but they have to recognise that people can’t be taken for granted.”

The factional powerbroker has not been interviewed in the media since May 25’s disastrous interview with Sky News’ David Speers, where the shadow minister was unable to articulate Labor policy on the Schoolkids’ Bonus and left his talking points in the interview. They landed on the front page of The Daily Telegraph.

[Has anyone seen the elusive member for Batman?]

Feeney has won the support of former Labor councillor and current mayor of Darebin Vincent Fontana, who along with Villella and Greco will be up for election in October.

The three-time mayor wrote to constituents in a double-sided letter also in English and Italian calling on them to back Feeney in the election. Fontana says in the letter that Feeney is “committed to looking after pensions, including keeping pension rights overseas” and supports the Italian community in the seat of Batman. 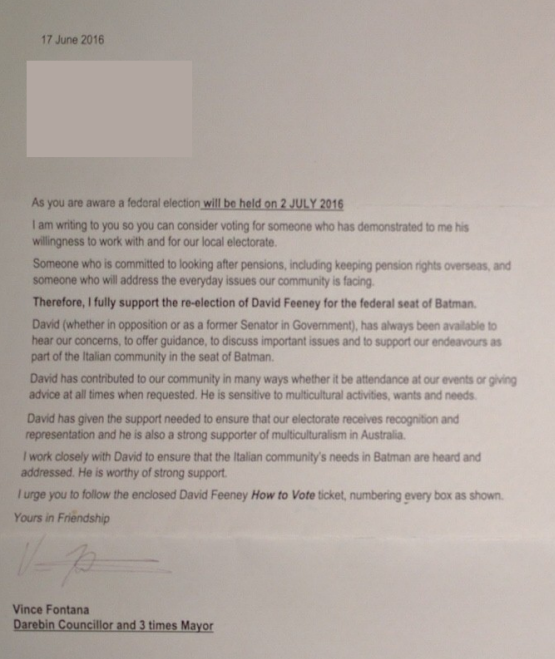 Fontana left the Labor Party in 2012, saying at the time he “could no longer be associated with the party at any level”.

Labor has also called out Greens advertising on the gay hookup app Grindr during the campaign, which claims Feeney has not voted for marriage equality. While Feeney is on the record as a supporter of marriage equality, the Greens have pointed out that his voting record shows he has not voted for it in Parliament. This led to Labor’s well-respected advocate of LGBTI rights in Parliament, Penny Wong, tweeting that the Greens were engaged in “dirty tricks” and Feeney was a strong supporter of equality.