Labor remains ahead in today's Essential Report poll, with evidence its Medicare scare campaign is working.

Labor remains in the lead with less than a week to go to the election, with today’s Essential Report showing it has retained its 51%-49% two-party preferred lead, with the Coalition losing a point on its primary vote. The Coalition is on 39%, Labor steady on 37%%, the Greens also steady on 10%, NXT on 4% and “others” up a point to 10%. 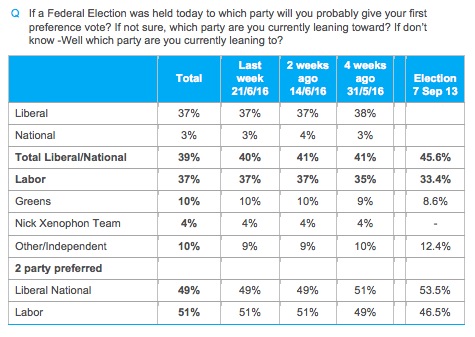 With a high third-party vote — 24% — distribution of preferences will be crucial in a number of seats. On that, there’s some interesting news for the major parties. Essential also asked how people would allocate their second preference. Once “don’t knows” (15%) were removed, 86% of Greens voters said they would preference Labor second. That compares to 83% of Greens preferences in the 2013 election, suggesting Labor will secure at least the same level of Greens preferences as then, and perhaps more. For “other” voters, 37% say they don’t know to whom they’ll give their second preference; the remainder split 52% to the Coalition and 48% to Labor. That compares to 55%-45% to the Coalition in the 2013 election, again suggesting Labor will do at least as well as 2013 and perhaps better on preferences from “other” voters.

Opposition Leader Bill Shorten, however, has achieved a comeback in his personal approval ratings. In July 2015, just 27% of voters approved of Shorten’s performance and 52% disapproved. Now, 37% of voters approve and 39% disapprove, his best results since late 2014 and up from 34%/40% a fortnight ago. Malcolm Turnbull is back to even on approval: 40%/40%, compared to 38%/40% a fortnight ago, and still leads 40%-29% as preferred prime minister.

Asked who they think has had the best campaign, 30% of voters say Malcolm Turnbull, 28% say Bill Shorten and 8% say Richard Di Natale; 34% say they don’t know. However, those results are heavily influenced by voting intention. “Other” voters rate Shorten at 23% ahead of Turnbull at 19%.

Whatever the outcome, Labor’s Medicare privatisation scare campaign has been a success. Labor is still running ads this week using broken promises by John Howard and Tony Abbott to counteract Malcolm Turnbull’s insistence he will not privatise Medicare, and 50% of voters say it is likely that the Coalition will attempt to privatise Medicare, including 25% who say it is “very likely”, while 34% of voters says it isn’t likely. Of Liberal voters, 23% say it is likely while 13% of Labor voters say it isn’t likely. 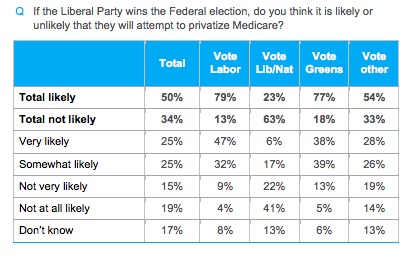 And in light of further sickening revelations about the treatment of cattle in the live export trade and Barnaby Joyce’s efforts to link asylum seekers to the issue, there’s very strong support for phasing out live cattle exports altogether: 63% of voter support phasing out live exports, including 34% who “strongly support” ending it; just 18% oppose ending it. Even 57% of Coalition voters support getting rid of the trade, including 25% who strongly support ending it.

Still looking good for Labor, although it might just be a hung parliament!
Thank goodness a large number of voters are beginning to understand that Medicare IS under threat…Talcum might say he will not privatise it, but he will destroy it anyway by what ever means possible!!
Don’t believe Talcum and the LNP…they have done it before (Malcolm Fraser with Medibank).

The LNP will loose this election. They lied to the people they broke the trust of the people, Abbott has destroyed the LNP with his lies. We all know he is still there lurking in the back ground with his right wing clowns waiting to come back, complete with his soul destroying 2014 budget. And Malcolm has no judgement, he was a failed leader of the LNP in 2009 and now he is just a weak yes man for the right wing of his party. Bye bye.

Amazing. I am only aware of one poll that had the LNP ahead 51/49 in the past 8 weeks and that was all over the papers and TV, and yet the Labor party has polled 51/49 as often as not and it is really hard to find in the MSM.

Is that just me?