Media briefs: TV ads rule … except the political ones … no more Footy Show? …

Why people don't like political ads. And other media tidbits of the day.

TV ads still rule the roost. Three in four voters (72%) say they’ve seen TV campaign ads from political parties this election, suggesting paying up for TV ads remains one of the best ways for politicians to reach the electorate.

The figure comes from this week’s Essential report, which asked voters which types of contact they remembered having with political parties during the campaign.

Material sent to letterboxes was the next most common form of contact (70%), followed by receiving campaign emails (26%), and phone calls (21%).

Around 7% of voters recall being door-knocked by a political party this campaign — a slightly higher figure than the 6% who say they’ve been door-knocked by another group (like a union) about the election.

The poll didn’t ask how many respondents recalled seeing election advertising on social media. From Thursday, ads in broadcast media are banned in the immediate lead-up to the election. So you’d expect the parties to pour even more money into digital campaigns.

Why people don’t like political ads. Voters may recall watching political ads, but does that do the parties any good? ANU political marketing expert Andrew Hughes says because politicians keep putting their own mugs in their ads (and people hate politicians), people recall them negatively. 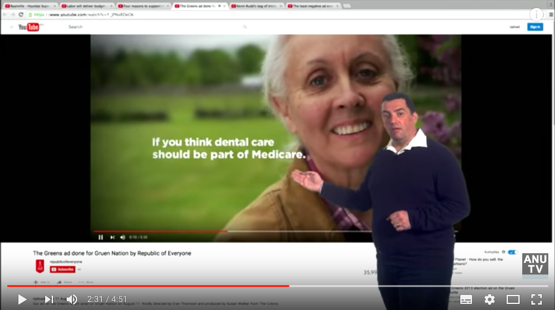 Front page of the day. The Hobart Mercury on how WIN’s 30-year affiliation with Channel Nine comes to an end on Thursday, potentially replacing shows like 60 Minutes and The Voice with content from Channel 10.

“And while Tasmanian television broadcaster TDT said it remained confident a deal could be struck with Nine by Thursday, the Sydney-based entertainment giant admitted Tasmanian viewers may have to rely in the short term on streaming content via the 9 Now app.

“WIN is scheduled to air the The Footy Show for the last time ­tomorrow night, and Tasmanian fans of the ratings winner remain in the dark about if and when the Sam Newman-hosted hit will return.” 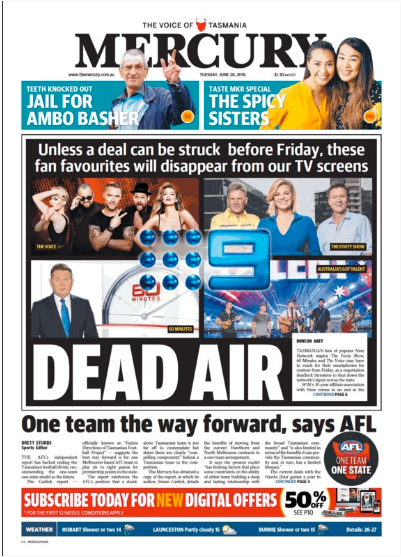