Labor and the Coalition have outlined very different visions for Australia, if you check the election promises.

That sort of depends on the result. For all the “they’re all the same” talk, Crikey‘s Cash Tracker shows in an easy graph that the Coalition and Labor have very different visions for the country: 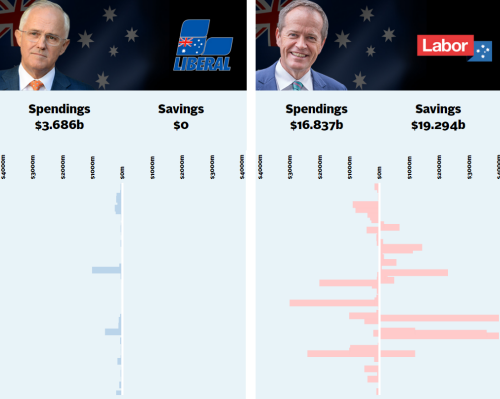 The Labor Party has outlined a lot of big promises, both spendings and savings. The Liberal Party has promised small, incremental changes (and no savings measures to date, though they will come out later this afternoon). But head over to our Cash Tracker and check out the promises for yourself. Do you want a significant change, with a government that will cut a lot and spend a lot on different things? Or do you want a limited impact, with a government that is more or less what we have now?

That is the choice we will have in three more days. It might be time to start paying attention.

Todger Dodger on RN drive this evening was shown to be a vacant space with a mouth when PK asked him repeatedly why Talcum is claiming as “savings” the putative money not paid to new dole claimants for 4 weeks when it is unlikely to be passed in the Senate. He just kept making the same noises in response – no brain activity involved.