Brexit and budget numbers are playing well for the Coalition as we enter the home straight.

Bernard Keane, Crikey politics editor: Brexit is still confusing political matters, which notionally is good for the Coalition and its campaign for stability. Labor’s budget numbers, portrayed as being significantly worse than the Coalition’s, were the most damaging issue of the day for Labor. A definite win for the government.

Paula Matthewson, political commentator and former media adviser to John Howard: When the time comes to write the lessons of this election, historians and pundits may point to Labor’s admission that it would deliver a bigger short-term deficit than the Coalition as the day they lost the election. But for mine, it was yesterday when Labor did itself the most damage. Yes, the opposition did the right thing releasing its final costings a week out from the election, even if it did so under the cover of the Liberals’ campaign launch/rally. But it has badly mishandled its pitch for economic credibility by belatedly reversing its vociferous opposition to some of the Coalition’s zombie measures, and also crab-walking away from its criticism of the “retrospective” elements of the Government’s proposed changes to superannuation. All in the name of a budget bottom line that would still be worse than the Coalition’s. Frankly, Labor’s approach to the budget at this late stage of the campaign simply doesn’t make sense. It suggests a mighty balls-up took place behind the scenes that threw the Opposition’s otherwise tight and targeted campaign into disarray. The government needed to do nothing to win the day.

Eva Cox, writer, feminist, sociologist, social commentator and activist: The Brexit bites and economic management is back big time and is harming the ALP.  The government’s emphasis on deficit scare campaign is working and the ALP is not successfully distracting it with Medicare scares. Interesting responses from the two leaders on Four Corners. For example, a question on whether offshore detention damages people had Malcolm evading any responsibility versus Bill accepting it partially. No doubt that will be used against him too. The LNP wins but  voter choices increasingly seem to be the least worst options, rather than positive possibilities. No wonder established centrist parties are losing their grip.

Simon Cowan, research manager at the Centre for Independent Studies: It was always going to be a tough day for Labor. Global uncertainty in financial markets, deficit blowouts in Labor costings, the Liberal campaign launch occurring without Tony Abbott resorting to wildfire a la Game of Thrones … none of it helped. Nor has the public rending of garments by the fashionable left over those ignorant, racist voters and their Brexit. It’s a strange thing, but in a democracy voters somehow believe their vote means something — a point the Coalition may like to think about if they remain in office.

Dr Zareh Ghazarian, political scientist at Monash University and author: It was a pretty flat day for both party leaders after their campaign set pieces on the weekend, so it was Peta Credlin who captured attention in her capacity as a commentator on Sky News by re-drawing attention to the deep division emerging in the Coalition about same-sex marriage. 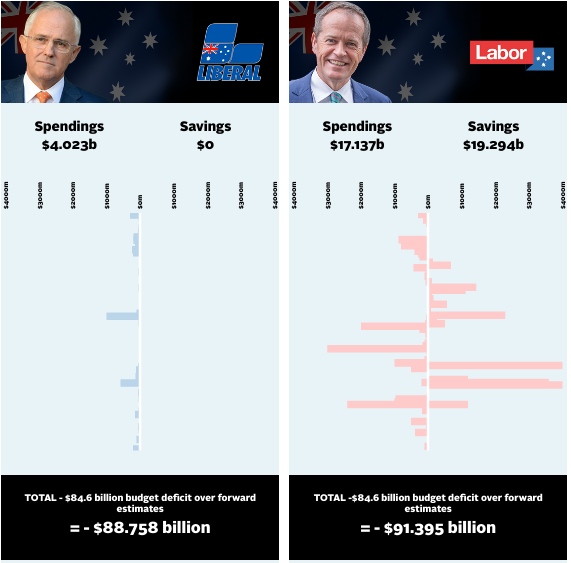 The Coalition is ending this campaign the same way it started it: with big spending promises in South Australia. They announced funding for transport and defence infrastructure, in the state where they are fearful of losing seats to NXT, yesterday. Labor is focusing on renewable energy today.

The Coalition: Doing better than Joe Hockey’s 11th hour costings release at the last election by two days,  Treasurer Scott Morrison will today release the Coalition’s costings. He said yesterday that the figures would show a slight improvement in the budget bottom line compared to May’s budget. The PM, riding the wave of instability stemming from Brexit, and capitalising on Labor’s adoption of many of some of the Coalition’s savings measures, is today focusing on business in Brisbane. At a press conference this morning, when asked about the Coalition’s costings, he took a leaf out of Shorten’s book and delivered this zinger:

“The Labor Party is saying they will run higher debt and higher deficits over each of the four years than us and then in the fifth year, miraculously, like Houdini, they will spring out of that hole they have dug for themselves, that budget black hole, they’ll spring back into balance.Well, you really would have to believe in fairy tales to believe that.”

Bill Shorten: The Opposition Leader started his day today at a solar farm near the border of the bellwether seat of Eden-Monaro with Labor candidate Mike Kelly. He announced that a Labor government would establish a Strategic Industries Taskforce and Fund aimed at supporting the transition to renewable energy.

The Greens: Richard Di Natale is campaigning in the vulnerable Labor-held seat of Batman today, where the Green’s believe Alex Bhathal stands a good chance against the incumbent, David Feeney. Adam Bandt, speaking to ABC’s News Breakfast this morning said that the Greens could pick up a number of lower house seats this election, including Batman, Melbourne Ports, Higgins, Richmond, Grayndler and Sydney. Bandt also attacked both major parties on their treatment of refugees; responding to Shorten’s comments regarding New Zealand as a possible resettlement location he said: “why are we looking at anywhere but here?”.

Malcolm Turnbull once again repeated his call to voters to refrain from voting for minor parties and independents today. A vote for independents he said, could lead to: “Instability. Uncertainty ... The same sort of fiasco we had under Julia Gillard.“

It seems it’s not only the political establishment that is running scared, however, but also the media. The Australian‘s front-page story today alleges that Tony Windsor was a schoolyard bully. That’s right, with three days to go until the election, Australia’s only national broadsheet runs a story on allegations of schoolyard bullying from decades ago. The independent candidate for New England called the story “gutter journalism” and has reportedly called in his lawyers. The battle in New England between Windsor and Barnaby Joyce is becoming increasingly acrimonious.

The value of incumbency appears to be increasing as we get closer to election day, as Malcolm Turnbull continues to soundly win the media game across all platforms.

HOW MANY PEOPLE HAVE VOTED? 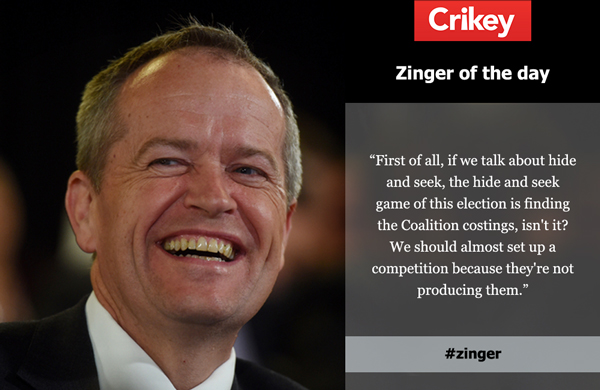 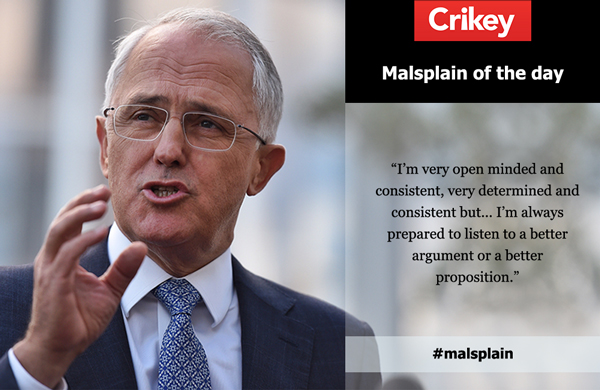 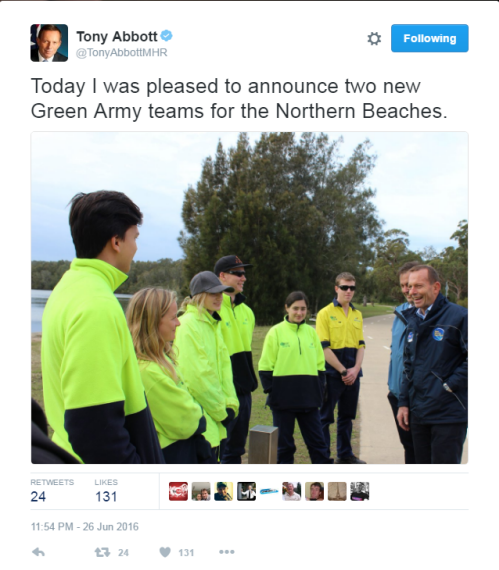 Both Scott Morrison and Malcolm Turnbull have sought to defend the Coalition’s plan to hold a plebiscite on marriage equality today after another withering attack by Penny Wong on Lateline last night. Wong said the plebiscite would be designed by conservative Liberals in such a way that it would “deny me and many other Australians a marriage certificate will instead license hate speech to those who need little encouragement”. Morrision said on RN Breakfast this morning that he would respect the outcome of a plebiscite and Turnbull said if the plebiscite succeeds the legislation will “sail through” the Parliament.

At John Howard’s 2001 campaign launch he famously said, “We will decide who comes to this country and the circumstances in which they come.” Following revelations of widespread corruption in Australia’s skilled and student visa programs, Bill Shorten has attacked the current Coalition government on this issue, paraphrasing Howard:

“This government cannot tell us right now, as we speak, who is here, what are the circumstances in which they’re here, are they actually doing what the visas say they’re meant to be doing, how many people have manipulated the system and got in under Australia’s guard, and then we see a complete breakdown of the visa system.”

The joint 7.30-Fairfax investigation in question found that, over the past 12 months, 132 cases of suspected corruption inside the Department of Immigration have been referred to the national corruption watchdog, the Australian Commission for Law Enforcement Integrity. One former immigration official interviewed as part of the investigation claimed that a focus on boat arrivals had allowed corruption and migration crime involving people arriving by plane to flourish unchecked. The DIPB has responded here.

This election campaign we’ve seen the proliferation of dank memes into the mainstream. The Young Greens and the AMWU have both posted iterations of “Dat Boi” memes, and in a wonderfully surreal moment ABC’s Insiders explained what a dank meme is. A Facebook page run by Union OHS reps went back to basics yesterday; white text over a photograph … 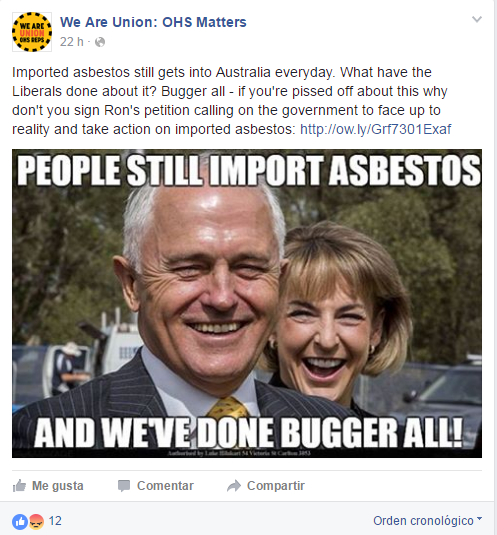 Malcolm Turnbull momentarily lost his wife, Lucy, on the campaign trail in Adelaide yesterday before finding her in a toy shop buying a present for their grandson Jack. 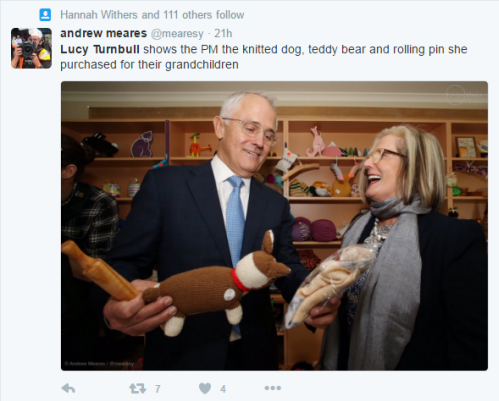 Brexit and budget numbers are playing well for the Coalition as we enter the home straight. The Coalition is today releasing their costings while Labor focuses on renewable energy.

Re: the commentators at the beginning of this article…The essential poll today proves them ALL wrong.
Firstly Labor is ahead on 2PP votes;
Secondly the Medicare ‘privatisation’ warning from Bill Shorten is far, far from a damaging move…some 50% of those polled agree with him, while far fewer agreed with the commentators view. This issue is vital, and it would seem most people agree with that sentiment.
Thirdly, the so-called Labor budget deficit over the next 4 years…get a grip! We are talking about a TOTAL added deficit of $16 billion, over four years, in a $1 trillion+ annual budget. That is $16 billion added to the total of around $5 trillion. And it may never happen anyway!!
Then there is the small matter of the Coalition’s costings…they are relying on some $30 billion of savings, over four years, from the left-over policies from the 2014 budget. Most of these policies have been voted down by the Senate, some twice. If Talcum is relying on a joint sitting of the parliament so the LNP can ‘rail-road’ these savings through, then I suggest he is living in cloud cuckoo land…they won’t have the numbers!!
So…stop attacking Labor, when the LNP are clearly worse!!!

Forgot about Brexit…this is a UK/EU problem. If it affects anyone in Australia after the initial shock and awe, it will be the rich and the very rich.
Who gives a sh+t about them???!!!

Sadly, things that affect the rich soon enough lead to problems for the poorest.

Given that the Brexit crisis was precipitated by a moderate conservative kowtowing to the extreme right of his own party, how can Malcolm Turnbull claim that he stands for stability with Tony Abbott still very much a force within the Coalition?

Turnbull seemed to have a separation anxiety disorder when he thought he had lost Lucy.