Fairfax's losses are the Australian's gain.

Oz swoops in. The Australian has made two strategic hires of Fairfax journalists. 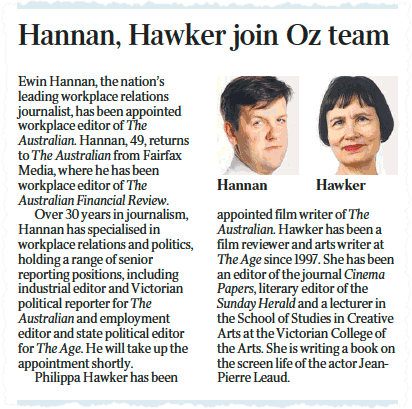 Arts writer Phillipa Hawker was made redundant in the Age’s latest round. (Her readers were so unhappy they set up a petition urging the company to keep her, to no avail.) They’ll be able to read her in the Oz now though. She’s joined as a film writer.

Also (re)joining the Oz is the AFR’s workplace editor Ewin Hannan. Industry insiders considered it a major coup when Fairfax convinced the veteran industrial relations writer to jump ship from the Oz in December 2014. But he’s gone back to News Corp. — Myriam Robin

The Oz protects its own. Like a witless dog still gnawing a bone, Gerard Henderson continued his bleat about Crikey in The Weekend Australian. And, true to form, Henderson misrepresents what his critics have said in an attempt to score a cheap debating point.

After quoting only the first half of a sentence from my piece last week, he wrote, “What Salter fails to understand is that pedophiles and those who protect them try to disguise their crimes.”

For the record, the second half of that sentence published in Crikey (but deliberately not quoted by Henderson), was: “… and to the ways in which the church has sought to ignore, deny and cover up the crimes of the pedophiles in their ranks”.

In any case, it is surely a curious proposition — even of twisted Hendersonian logic — to suggest that attempting to hide a crime such as paedophilia somehow renders the act itself less morally repugnant.

Not surprisingly, The Australian today has declined to publish a letter to the editor that made precisely these points. — David Salter

Brexit rocks UK media. The value of some of Britain’s biggest media companies was crunched by the wild market sell-off in the wake of the Brexit vote last week, with sharemarket losses approaching $20 billion in London and New York. In fact, some of Britain’s major media companies shot themselves in their balance sheets by vociferously supporting the Leave case in last week’s UK vote.

Coming after a miserable start to the year for print media (and after a 15%-plus fall in print ad revenues for 2015), there is now renewed speculation that the sector faces even greater pain in the next year or more as the UK leaves the EU. The continued growth of Facebook, Google and Twitter will not go away and will be more the preference of advertisers seeking to overcome the departure of the UK from the huge single, 27-nation EU market.

The most damaged of all listed UK media companies was the country’s commercial TV giant, ITV, whose shares plunged more than 20%, which wiped more than 1.4 billion pounds (close to A$2.5 billion or more than US$1.8 billion) from the value of the company on Friday (ITV shares have already fallen 20% so far this year as ad spending slowed and ratings growth remained weak).

Adding the losses together and the total is close to US$14 billion (A$19 billion to A$20 billion) in a day. — Glenn Dyer

Front page of the day. This week marks the last edition of seven Melbourne Leader papers, after News Corp made cuts earlier this month … 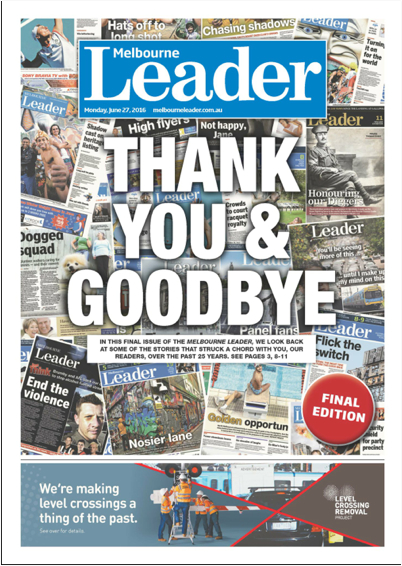