The candidate for the seat of Hotham has told a voter that in the case of a plebiscite, his vote on same sex marriage wouldn't be important.

On Friday we reported that Liberal councillor in Melbourne’s Glen Eira Council Kelvin Ho had used a conversation about legalising same-sex marriage to talk about the possibility of legalising bestiality in a Chinese language chatroom. Liberal candidate for the seat of Hotham George Hua was also an active participant in the group, which has since banned political campaigning. A tipster tells us that they attempted to ask Hua his views on same-sex marriage by direct message, but didn’t get much of an answer out of him. Hua said:

“The Liberal Party’s position on marriage equality is to hold a plebiscite. Every Australian shall be given a vote, whether they support it or not. So my vote is having the same weight as you. Therefore, it doesn’t really matter how I vote on this issue.”

Hua didn’t answer when further questioned about how he would vote if given the chance as a member of parliament following a plebiscite. He is up against Labor’s Clare O’Neil in the seat of Hotham, which she holds by 7%. 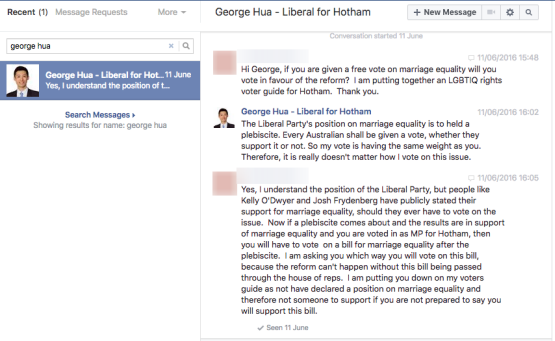