Stable Turnbull improving slowly, but Shorten still in the game.

Dr Dennis Glover, veteran Labor speechwriter and fellow of Per Capita think tank: This election is reminding me of Britain in 1992: Labor punching hard on health, the conservatives on economic trust, with the latter wrestling the ascendancy. It’s not the most exciting of contests, but there are still some interesting aspects. Perhaps most fascinating is Labor’s rhetoric. Note how its spokespeople now use the couplet “middle-class and working-class Australians”. Working class — where did that come from? Labor has been reluctant to mention the existence of its old base for at least a generation, either because it was too scared of the taunt of “class warfare” or because it had chosen the progressive middle-class as its new favoured constituency. And just as interestingly, the Coalition hasn’t come down hard on Labor as a result. Is this telling us something about growing anger and (dare I say it) some sort of class consciousness at the bottom of the income ranges as the old economy and world the unions and Labor created has been slowly unwound? Has the sort of democratic revolt that has seen the rise of Trump and the Brexit arrived here, at least in a mild sort of way? Oh, to be a fly on the wall of Labor and Liberal focus groups.

Dr Zareh Ghazarian, political scientist, author and media commentator: Turnbull had one of his best weekends of the campaign. It was a strong and safe launch that was able to use the Brexit as an effective backdrop to his message of stability.

Jane Caro, author, social commentator and communications consultant: The last few days have gone to the Coalition. Not because of anything they’ve done but because of the shockwave that has accompanied Brexit. Uncertain times always favour incumbents, and lucky Malcolm may just find he was (at long last) in the right place at the right time. The ALP have been rather unlucky because they’ve run a better campaign, have policies the electorate actually prefer and — in normal circumstances — might just have pulled it off. The complicated story they have to explain about their costings won’t help, particularly as it gives ScoMo the ammo he needs to feed fear with messages of doom and deficit. In a shaken electorate, with only a few days till voting, those messages are likely to stick. 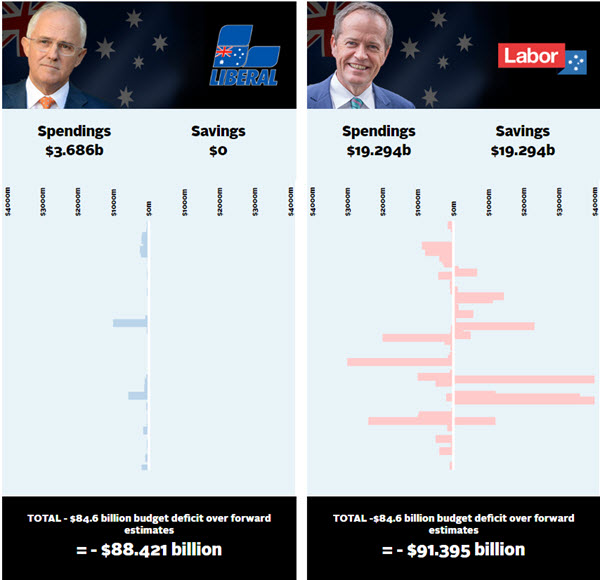 It was a huge weekend for the government, with the official Liberal campaign launch bringing a range of promises on education, healthcare and security. Labor released their final costings, which included some significant savings measures.

Malcolm Turnbull: The PM woke up to good news this morning as the latest Newspoll gives the Coalition a slight edge going into the final week of the campaign. Turnbull spent the day in South Australia, where he had a breakfast interview with FIVEaa Radio in Adelaide that he used to remind voters to stay with a stable Coalition government. He also discussed what the Brexit might mean for Brits and Australians alike, saying there were free trade opportunities, but also uncertainty. Then it was off to meet with defence software company Cirrus, which hopes to win the contracts to work on the new Australian submarines. Turnbull spoke about a $297 million contract — announced in the budget — that was awarded to contracting company Raytheon to handle the upgrade and development of the Woomera test range. In an unexpected turn of events, former Australian of the Year Adam Goodes was a special guest at the event.

Bill Shorten: The Opposition Leader drove the new look Shorten Bus back to his home town of Melbourne, where the campaign to save Medicare from the (real or imagined) threat of Coalition cuts was, once again, a key talking point. It was cold and dreary in Melbourne this morning, which Shorten fans will be hoping isn’t a bad omen for his chances on Saturday. He joined Labor candidate Tony Clark to campaign at the local Swinburne TAFE campus in the marginal Liberal seat of Deakin. He also visited Casey Hospital in the electorate of La Trobe with Labor candidate Simon Curtis to reaffirm Labor’s commitment to protect Medicare.

The Greens: Richard Di Natale was also in Melbourne today, fresh from the Greens campaign launch, where he spoke about “dying with dignity” legislation after the Greens announced they will push for voluntary euthanasia legislation in the next Parliament. Meanwhile, Greens Senator Lee Rhiannon joined the party’s Wentworth candidate, Dejay Toborek, to launch the Greens arts initiative.

A number of independents are united in their anger at Malcolm Turnbull today after he told voters not to “roll the dice” on independent candidates. He specifically implored people not to vote for Glenn Lazarus, Jacqui Lambie, Nick Xenophon and Pauline Hanson, although Xenophon looks like a rising force and Lambie is defying predictions and hanging on in the polls. Understandable that Turnbull is desperate to win government in his own right, but he’d better be careful not to inflame too much tension with his independent colleagues. Even a clear majority in the House of Representatives won’t count for much if he has to deal with the potentially chaotic and hostile Senate the polls are suggesting. Maybe the government needs to do something about all these independents and micro-parties? A double dissolution might be a good way to clear the decks.

A clear win for Malcolm Turnbull, who dominated all forms of media on the weekend thanks to the Liberal Party campaign launch. 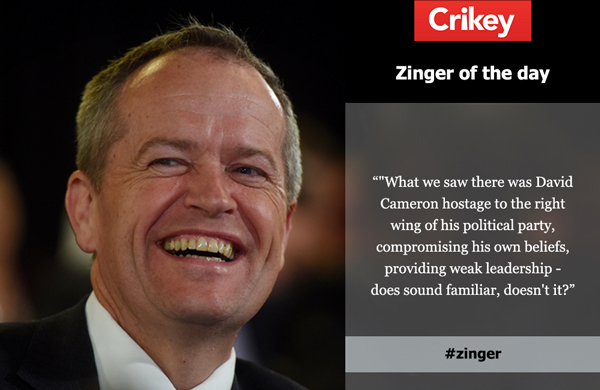 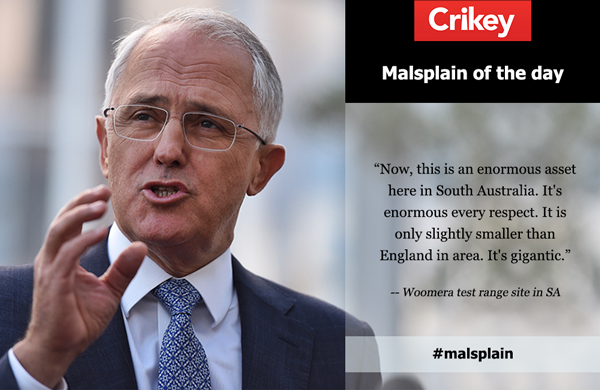 He was putting on the bravest of brave faces at the Liberal Party’s official campaign launch where he was presented, along with John Howard, as a former prime minister. He smiled, shook hands with Malcolm Turnbull and applauded with the rest of the room while the man who deposed him took centre stage. Later on, he went to catch up for Sunday dinner with his mum where he donned a jumper that truly, only a mother could love. 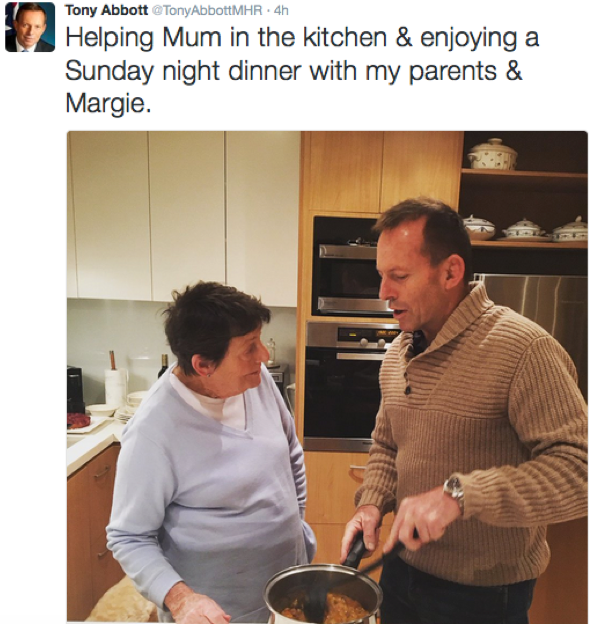 Politicians are used to public criticism, but when it comes from your own side it stings much more. Former Liberal leader, and regular contributor to our scorecard John Hewson has attacked Malcolm Turnbull for his failure to address climate change. He described the lack of action by the government as a “national disgrace” on what he believes should be the most important issue of the campaign. Hewson was attending the #climatefizza rally in the PM’s seat of Wentworth, just down the road from Mr Harbourside Mansion’s home. The rally was timed to coincide with the Liberal Party campaign launch, where the man who was once lost his party leadership over climate policy was carefully avoiding the topic.

Former Treasurer and Labor heavyweight Wayne Swan is facing a real battle to hold his Brisbane seat of Lilley. He first won the seat in 1993, lost it in 1996, and returned in 1998, eventually serving as deputy to both Kevin Rudd and Julia Gillard from 2007-13. He only held the seat with a 1.3% majority last time round and will probably rely on the Greens preferences to secure it again. If he does lose the seat it would be an unceremonious end for a man who once controlled the nation’s purse. Mind you, the shock of Swan losing would be somewhat offset by the fact that nobody realised he was still there.

Shadow treasurer Chris Bowen and shadow finance minister Tony Burke have unveiled Labor’s final policy costings for the campaign, which will produce higher short-term deficits with larger long-term surpluses than their Coalition counterparts. Predictably, the only piece of information that seems to be filtering through is that Labor will increase the deficit by $16 billion over four years. Despite the costing being verified by an independent panel, the coalition has gleefully accepted the gift of a “same old Labor” soundbite. Expect Turnbull, Morrison and co. to dine out on the $16 billion figure at every opportunity between now and Saturday. Remember, the coalition promised to return the budget to surplus in this term of government, only to double the deficit. Surely by now we’ve figured out that an honest and accurate assessment of the nation’s finances isn’t what the people want to hear.

VOTERS JUST DON’T GIVE A DANBY

The seat of Melbourne Ports has been held by Labor since 1906 and is currently held by veteran MP Michael Danby, but it could be on the way out in what was once an unthinkable result. Danby’s primary vote numbers are slipping badly, with polling placing him third, behind both Liberal and Greens candidates. This would be a huge concern as Greens preferences were what he would have needed to retain the seat. The Greens also declared that they could now be in line to win the seat, meaning a Labor stronghold might remarkably come down to a fight between the Liberals and the Greens.

We’re in the closing stages now. Malcolm Turnbull was in Adelaide where he spoke about the new submarine developments. Bill Shorten was in Melbourne, where he’s still pushing to make the election a vote on education and healthcare. Meanwhile Richard Di Natale was also in Melbourne to discuss “dying with dignity”.

EVERY Australian will ignore Bill Shorten’s warning on Medicare at their peril. There are wise heads around (those who have been prominent in the healthcare industry over decades) who understand what Shorten is saying, and what is at stake here.
With the election of a Coalition government next Saturday, we will be well on the way to the Americanisation of our healthcare system during the life of this parliament…probably too far along to correct it at the election in 2019.
This has very little to do with the ‘privatisation’ of the payment system, and everything to do with the undermining of the UNIVERSAL access and revenue system which is at the core of Medicare.
Calling this a scare campaign is juvenile and dumb…try educating yourself on the facts!!

who voted for what when Howard made same sex marriage illegal and are they still there .cant that decision simply be reversed