Bild offers Britain numerous incitements to stay in the EU. Plus other media tidbits of the day.

Ad blockers soar. No one should be surprised by the forecast from US media forecaster and analyst eMarketer that ad blocker use in America will soar this year — at a time when the firm and other forecasters (most lately, PwC) are saying that online advertising is also soaring and will top the money spent on TV next year, instead of in 2018.

PwC, in its annual outlook for the US media sector (it has been releasing reports on major economies such as Australia in the past month), forecast that online ad spending is expected to overtake TV advertising in size next year. The firm predicts that online advertising spending will exceed US$75 billion next year, surpassing the US$74.7 billion projected for TV. And online is going to continue to grow faster than TV advertising — PwC says online advertising is expected to grow at a compound annual rate (CAGR) of 9.4% from 2015 through 2020, compared to TV’s 3.2% rate, says the report.

PwC says mobile’s share of online ad spend is expected to grow throughout the forecast period (to 2020), increasing to a predicted 49% share. So confronted with the growing ubiquity of online ads, especially on mobile, the use of ad blockers is soaring. eMarketer found that more than 26% — of Internet users will block ads this year. And, eMarketer forecast that in 2016, 69.8 million Americans will use an ad blocker, an increase of 34.4% over last year. And in 2017, that figure will grow another 24.0%, to 86.6 million people. — Glenn Dyer

Exclusive watch. Now for a genuine “exclusive” from the Fin today on the controversial company tax cut. Yesterday, we pointed out the AFR recycled arguments in favour of the tax cut from Chris Murphy — who conducted economic modelling in favour of the tax cut for federal Treasury — which The Australian first ran in early June. And the AFR had the hide to call the story on Thursday, on page 1, “exclusive”. In that story, the AFR mentioned how former PM and treasurer Paul Keating had cut the company tax rate.

But once again the AFR has failed the most basic test of advocacy when it comes to Australia’s most recent economic past: be careful not to raise the ire of the world’s great Treasurer (no, not Wayne Swan). He is quick to defend his record and legacy and this time it was no different, firing a letter to the editor of the AFR, which the paper then turned into a story (yes, “exclusive”) on the top of page 7 today, which was fleshed out with carefully selected “experts” to dilute Keating’s message.

Keating’s letter was short, straight to the point and undermined the modelling arguments by Murphy (and the Prime Minister and Treasurer) and the AFR’s selective arguments in favour of the cut — but Keating’s letter also contained a small mistake, of sorts:

“The AFR has embarked upon this campaign in collusion with the Business Council of Australia, in the council’s camouflaged attempt to reduce the rate of company tax on foreign shareholdings. The AFR must be alone among national financial newspapers in urging so massive an impost on the national fiscal balance.”

The AFR is not the only paper in urging a huge burden on the country’s finances; the Murdoch clan papers, led by The Australian, are vocal supporters of the tax cut and have ignored the burden (which is, how are we going to pay for it over the full 10 years?). But he is not wrong in lumping the AFR in with the Business Council of Australia (and companies like Wesfarmers, which is like the BCA in exile in Perth). — Glenn Dyer

No one watching Cleverman. It was lauded widely lauded as a groundbreaking, ambitious drama, and renewed for a second season before it even went to air. But the ratings for the ABC’s Cleverman have been lacklustre.

Even though the ABC does not necessarily look for ratings, there is a limit to the forbearance. Tractor Monkeys and Randling, two panel comedy programs from recent times, were turkeys and were eventually put of out of their misery. Cleverman is different, being a co-production,with an Aboriginal storyline, which does make it hard to sell to mainstream Australian TV audiences, even for the ABC.

Crikey asked the ABC whether Cleverman had done better on iView, but didn’t hear get an answer before deadline — we’ll update when we do. — Glenn Dyer and Myriam Robin

Front page of the day. German newspaper Bild offers Britain a number of bribes to stay in the European Union. The main headline reads: “Dear Britain, if you remain in the EU, we’ll acknowledge the Wembley goal” … 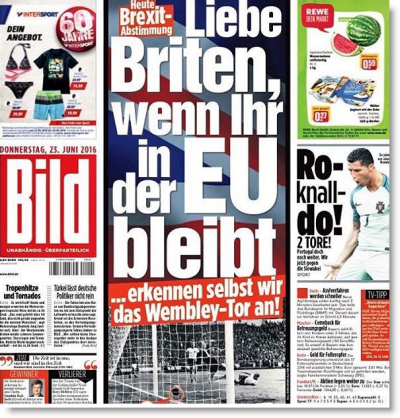 Clever Man is doing well in the downloading (not iview) world.