Not so screwed. Bill Shorten’s statement to Kyle and Jackie O that he went into a strip club once or twice, but left “as soon as I realised what it was”, is an instant bullshit classic, right up there with Bill Clinton’s statement on marijuana. Well, we’ll take him at his word, but one veteran from his student politics days remembers it differently.

“The Victorian Labor Right loved lapdance clubs! They were new and ‘cutting edge’ at the time. They used to frequent Santa Fe in Russell St, next to the (now gone) Greater Union cinema. Made them feel like they were Scarface or something.”

Candidates light up. While Bill Shorten says he doesn’t remember seeing any naked ladies in his past, one candidate can’t forget her experience — and is actually quite proud of it. Sally Baillieu, the Arts Party candidate for the seat of Dunkley, will be familiar to many fans of classic Australian rock:

“In 1980, legendary Australian band Australian Crawl released their Album, The Boys Light Up, and it went on to achieve Platinum, five times. It still ranks among the top selling Australian albums of all time. The cover featured a naked sunbathing girl on the beach at Mount Eliza, with the five band members standing in the shallows. 36 years later, the girl who featured in that iconic cover photo is standing as the Arts Party candidate for Dunkley.”

For those whose memories are as rusty as Bill Shorten’s, here’s the cover: 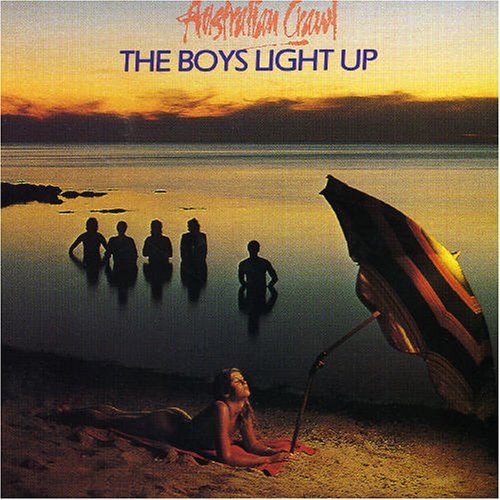 We asked Sally Baillieu if she was, in fact, the woman on the front of the record cover and she said it was “definitely true” and that she was “very proud” of being involved with it.

“I think it was my first year of media studies at RMIT. We’d all grown up together, James [Reyne] and his younger brother David [who was originally the drummer in the band] were really close friends of mine. When that first album came out they didn’t know many people who would do it,” she told us.

Although proud of the photo, Baillieu wasn’t going to bring it up as part of the campaign “It’s certainly not something I rest my hat on.” Baillieu has worked as a theatre producer and a radio presenter hosting an arts-based radio show. She says she was motivated to get political by government cuts to the small and medium arts sector, which have affected many of the artists and art projects for disadvantaged people in her area.

Baillieu’s surname is familiar to those in both the arts and politics — her brother-in-law, Ted Baillieu, was Victoria’s premier and arts minister. “I’ve seen [politics] reasonably first hand and terrfiying as it is, I still felt this is an issue I really need to wade in on,” she said.

So what is more scary, the theatre of democracy or an actual stage?

“It’s more scary to get up as a politician. I think if you get up on stage and you’re performing then everyone wants to like you, and in politics its a very nasty dog-eat-dog world and people don’t want to like you.”

Get a clue. For voters who want to vote below the line (and get all the way to the end of the ballot paper), but don’t know where they should send their preferences, the website Cluey Voter has been launched to give a helping hand. Listing every party on the Senate ballot paper, it gives users the chance to give parties a thumbs up if they agree with their policies, or a thumbs down if they don’t. There’s also the option for a double thumbs down or up, and a neutral rating. After giving each party this very scientific rating, it gives you a ranking of the parties in the order you selected as a guide for how to vote below the line. Now you just need to learn the difference between the Liberal Party, the Liberal Democrats and the Australian Liberty Alliance and you’re set.

We’re not in Kansas anymore. While Queensland has some similarities with America’s mid-western states, this is not a comparison we expected. In the seat of Leichhardt, currently held by Warren Entsch, these corflutes have got the attention of a tipster who found them quite odd: 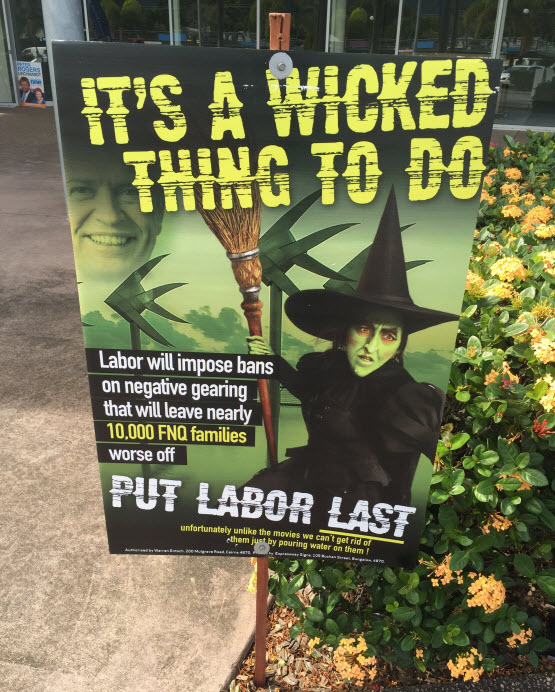 The poster takes aim at Labor’s plan to change negative gearing laws, with his face superimposed on a version of Oz that includes evil-looking wind turbines, which would probably be very effective in an area prone to tornadoes. Our tipster asks:

“So why the reference to the Wicked Witch of the West (played by the splendid Margaret Hamilton)? That’s not entirely clear. Oh wait, the only woman of the nine candidates for Leichhardt is … Labor’s Sharryn Howes.”

The fine print at the bottom reads “unfortunately unlike the movies we can’t get rid of them just by pouring water on them!”.

This election candidate has a special history

The question of what the difference is between the Liberals, the Liberal Democrats, and the Australian Liberty Alliance becoming much more difficult by the year one might observe.

FFS Crikey, “vote below the line (and get all the way to the end of the ballot paper” – how ignorant!
That is the whole point of the Senate voting reform, you DO NOT have to go to the end anymore.
This is piss-weak subbing – presumably the snippet was composed by an unpaid intern or similar who doesn’t know their arse from hole in the ground.
My resubscription is coming up but this sort of sloppiness is neither edifying nor encouraging.

Those aren’t wind turbines behind the Wicked Witch of the Entch, they’re public sculpture on the Cairns foreshore.