Calling Tony, getting Barnaby ... Skyrail and the CFMEU ... Abbott's own plan ...

Calling Tony Windsor, getting Barnaby Joyce. Independent candidate for New England Tony Windsor should maybe consider investing in search engine optimisation, after a tipster told what happened when her friend tried to donate to Mack’s owner:

“Type ‘Tony Windsor Contact’ into your search bar, and see the contact for Mr Windsor on GetUp. Now tap in the phone number, stick it in google and see what you get.

My friend tried to give a donation to Mr Windsor, and did exactly that. Barnaby Joyce’s office tried to take his donation. Seems Windsor’s office can’t get the number taken down, and the best they have been able to do it get ‘these contact details are no longer valid’ on the top — which only was put up after my friend saw it and nearly donated to a person he despises.”

The website the tipster is referring to is the fourth result when you google “Tony Windsor contact”, and was part of an old campaign run by lobby group. The phone number was Windsor’s old electorate office, which is now Joyce’s office, as he is now the member for New England. Points go to Joyce’s office staff who had the chutzpah to try to take the donation.

Abbott sticks to the plan. While the Liberals are asking voters to “stick to the plan”, former PM Tony Abbott has his own plan to get re-elected, which makes no mention of his successor Malcolm Turnbull, but does include his policies. 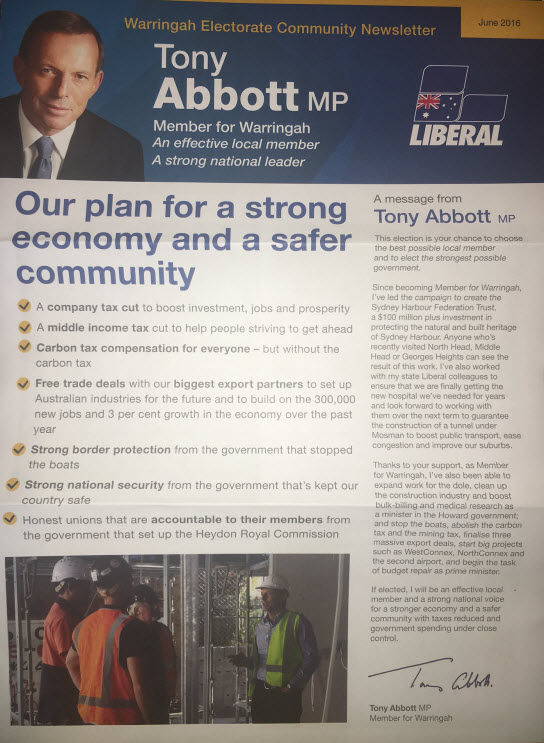 Give someone an Entsch, they’ll take a mile. A tipster in Cairns in far north Queensland, who tells us he supports “that SA chap” (we think that means Nick Xenophon), has been stirring up trouble with Warren Entsch and Bob Katter:

“The family values independent McCarthy seems to have incumbent Entsch on edge, Entsch turned up about 10am and stood like a statue with his stomach protruding. I was one of the only people apart from ageing sycophants to engage with him.

I asked him very politely if he considered the old age pension to be welfare or an entitlement. When he said no I asked why the Treasurer recently suggested that it was an entitlement. He then said angrily that ‘he was not here for a political argument’

I said that he was the local member and walked away. As I did so a minion rushed over to him and Entsch said loudly ‘there is always one clown’.

Later Katter arrived with his candidate for Kennedy and they together did the only news clip of the day with a local TV station.

I approached Katter later and made a bit of small talk before asking if his forebears were Afghan cameleers like Aboriginal people in WA. He wasn’t happy and told me his grandfather was Lebanese and a Christian and the family were dinky di since 1867. Then he said never to suggest the Afghan thing to him again and that where he came from people lost their teeth for saying things like that!

“Hilarious politics up here with the hillbillies in FNQ.”

Courting the ‘daddy’ vote. The Labor candidate challenging Prime Minister Malcolm Turnbull in his home electorate of Wentworth, Evan Hughes, has already found himself in hot water this campaign, with news.com.au asking if he was “Labor’s worst candidate yet” due to social media posts attacking “westies” and former Labor premier Kristina Keneally. A tipster has received this pamphlet from Hughes, who looks more like he’s auditioning for a romantic comedy than standing for Parliament. The photo includes a badge reading “#imissmalcolm”. 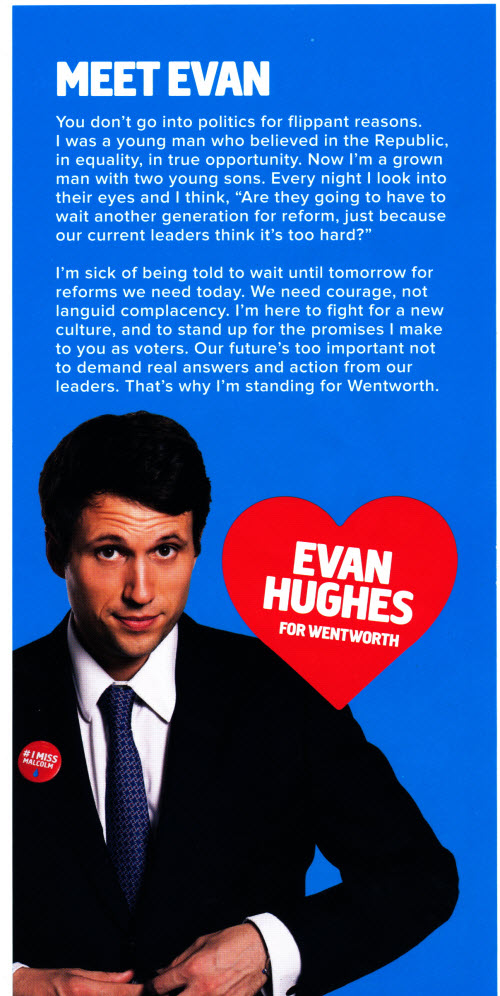 Former art dealer Hughes has not always looked so smooth, this photo in the Art Newspaper shows.

“In our pragmatic approach to foreign policy we deal with the world as it is not how we would wish it to be. It is incumbent on the Australian government to deal with the US Administration of the day. It is in our national interest to work closely with the President, with the White House Administration and, of course, the relationships between our two countries are so deep, so strong, enduring, that it would be against our national interests to start, for example, start hurling personal insults against a person who may well end up being the President of the United States. That is counterproductive.”

Plibersek was a bit more forceful, saying that she didn’t agree with Trump on some issues, and referring to John Howard’s comments before Barack Obama was elected in 2008:

“The result will be what it will be and we’ll be able to work with him. I think Mr Howard, no longer Prime Minister, but he was the first to go and shake President Obama’s hand when he was here for his official State Dinner on that trip and there were obviously no hard feelings. I think some of the ideas that Mr Trump has expressed, however, are wrong ideas and I don’t think there’s any problem with objecting to some of those wrong ideas,including the statements about a decreased American presence in our region, that the allies in the region are not bearing our share of responsibilities for security in our region, and system of the things that he’s said domestically, plainly, I wouldn’t agree with it and I think a lot of Australians wouldn’t agree.”

Lucky for Trump, there is at least one candidate willing to endorse him (even though no one asked). The Australian Conservative Party’s NSW Senate candidate Peter Wallace has announced in a long blog post that he backs Trump:

“He’s blunt, outspoken, and doesn’t care who he offends. But Trump has the common sense to see the western world’s threats and the straightforwardness to address them. And if he succeeds in delivering on his central promise to ‘Make America Great Again’, that’s largely all that matters — Go Trump!”

All fear Skyrail. Conflating state and federal politics is nothing new, but one tipster has seen this pamphlet in Melbourne’s eastern suburbs, attacking the Labor candidate for her views on rail infrastructure. It also has a go at the Greens for good measure, with no authorisation. 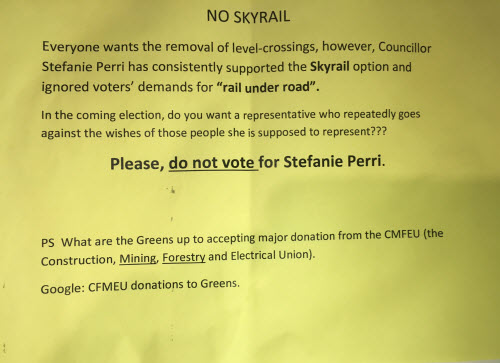 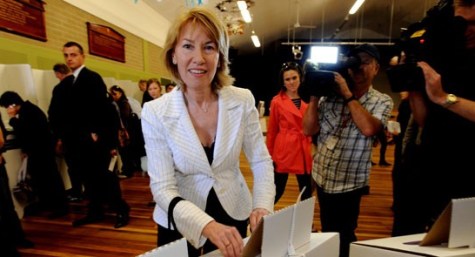 Here’s a thought to take to bed tonight :- “Trump, Johnson and Abbott (Murdoch on PR) – leaders of the next Coalition of the Willing”?

Only if we lived in Bizarro world… oh, wait.

With that trio at the helm we would no longer need to be concerned about climate change, the end would be nigh.