As readers would be well aware, Fairfax has been cutting costs wherever it can in editorial, with staff and columnists in recent months let go. Reader anger, of which there’s been a considerable amount as top writers walk out the door, hasn’t tended to do much to save people’s jobs. But it has saved one columnist.

For the past week, foodies have been in revolt after Richard Cornish, who wrote a weekly agony aunt-style column explaining why some things work and some things don’t when it comes to food preparation, told readers that his June 14 column would be his last. “This is the last time Brain Food will be published here,” he wrote. “Thanks for your letters, and remember — cooking is about nourishment, learning and conviviality”.

But a week later, he’s back! Or he will be, next week.

In today’s edition of Good Food, Nola James in Melbourne and Scott Bolles in Sydney carry a note in their columns saying Brain Food will be back next week due to “an overwhelming reader response”. “Many of you wrote in expressing dismay when we said goodbye to Brain Food, so, he’s back.” 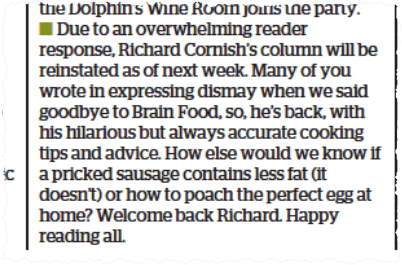 Cornish told Crikey he’d been quite staggered by the response from readers:

“I personally answered 160 emails … I believe there were similar numbers sent to the editor of the sections in Sydney and Melbourne, plus actual letters, angry phone calls and cancelled subscriptions. The editors reacted in constructive manner and asked me to consider writing the column the column for them again.”

It’s the only time we can think of that a reader backlash has halted the cost-cutters at Fairfax. Assuming that’s why the column was gone in the first place.

The era of the readers’ editor … over before it started

The fact of the matter is that Richard’s column was, apart from the Short Black chef gossip column, the only intelligent and amusing read in the shrinking section.