Labor and the Libs are both quaking in their boots in the face of unprecedented polling for minor parties (except the Greens). And the biggest bogeyman of all is Nick.

When Malcolm Turnbull fired the starter’s gun on the longest federal election campaign since 1984, many in the Coalition were duly nervous about the historic tendency of long campaigns to escape the control of the government of the day.

Over the course of the last fortnight, a consensus has firmed in both media commentary and betting markets that such fears were unfounded.

However, it might well be that those focusing on Labor’s incapacity to win the seats it needs — Dennis Shanahan in The Australian and Chris Uhlmann on the ABC being cases in point — will prove to have been missed the real story.

From the welter of polling that emerged over the weekend, the single most striking result was the finding by Ipsos that an election held today would deliver both major parties historic all-time low primary votes, of 39% in the Coalition’s case and 33% in Labor’s.

While that particular poll was an extreme case, the impression of escalating support for minor parties and independents — although not for the Greens, who increasingly find themselves tarred with the major party brush — is borne out by aggregated polling trends, as demonstrated by the chart below. 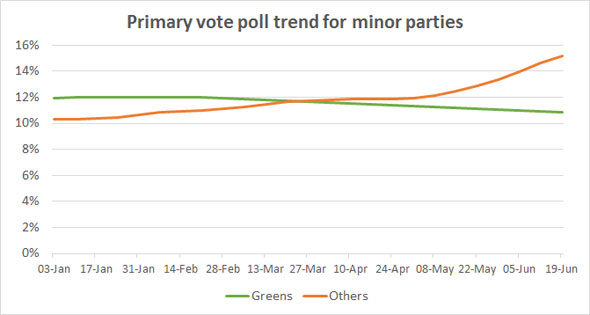 It’s surely not a coincidence that the upswing in “others” begins at around the time the marathon election campaign began on May 9.

The spectacle of politicians spending weeks on end in campaign mode looks only to have intensified the alienation from establishment politics that drove the extraordinary Senate election result in 2013, and now looks set to be unleashed upon the House of Representatives.

[Rundle: even Pauline Hanson might be good for the Senate]

As Labor’s long-term share of the primary vote sinks ever deeper into the 30s, it finds itself assailed on new fronts. So far it has lost the seats covering central Melbourne and Hobart to Adam Bandt and Andrew Wilkie, and even the help of Liberal preferences might not be sufficient to prevent the inner-Melbourne seat of Batman from joining the list on July 2.

With the Coalition vote heading in the same direction, there is an increasing likelihood that it too will suffer further losses in heartland seats to add to Indi and Kennedy, which it stands little chance of recovering from independent Cathy McGowan and Katter’s Australian Party veteran Bob Katter.

Despite the unpopularity of his decision to prop up Julia Gillard’s government after the 2010 election, Tony Windsor appears to be taking the fight right up to Barnaby Joyce in his old seat of New England, with a Newspoll result in The Australian yesterday crediting Joyce with the barest of leads.

Even more remarkably, a ReachTEL poll conducted for GetUp suggests the other balance-of-power independent from the Gillard era, Rob Oakeshott, might be competitive in his bid to win Cowper from Nationals MP Luke Hartsuyker — despite suggestions from some quarters that he doesn’t really want to win.

However, where Pandora’s box could truly be opened is in South Australia, where assaults on Nick Xenophon from both major parties seem only to have made him stronger.

The Liberals in particular have watched in horror as the $50 billion program to build submarines in South Australia, made in violation of all the government’s policy instincts, has served only to persuade yet more voters that the Nick Xenophon Team insurgency is delivering results.

Xenophon has now turned his protectionist pitch to the state’s decaying industrial centre of Whyalla, in the electorate of Grey, by assailing the government over its hesitation to commit to a rescue package for the embattled steelmaker Arrium.

[NXT stop: the balance of power]

Labor has sought some of the action by promising $100 million in grants and financing, but it’s Xenophon who is reaping the reward, with a poll conducted on June 9 suggesting his party’s candidate is poised to unseat Liberal member Rowan Ramsey.

For its part, Labor’s unusual step of running attack ads targeting a minor party player seems only to have strengthened Xenophon’s image as a scourge of the political establishment — so much so that one could almost suspect that had been Labor’s intention, by way of putting the Liberals under further pressure from Xenophon’s candidates.

The difficulty there is that Labor is by no means free of the Xenophon threat itself, with Port Adelaide and Kingston identified as seats where the NXT could outpoll the Liberals and then ride over Labor on their preferences.

According to The Australian, the South Australian sample from yesterday’s  Newspoll result — taken, to be sure, from inadvisably small sample — records NXT support at 29%.

Since the party would very likely win any seat where it outpolled one or the other major party, such a performance would find it echoing the accomplishment of the Scottish National Party in Britain last year by securing a clean sweep of the state’s 11 seats.

Polling in aggregate suggests the party’s primary vote to be more like 24%, suggesting a highly unpredictable situation in which it would win at least a handful of lower house seats on even the most conservative of projections.

When such possibilities are weighed in the balance, it begins to look possible that the limited gains most commentators are ascribing to Labor would be enough to threaten the government’s majority.

In seeking to reassure voters that his party’s successes will not unleash another round of the instability associated with the Rudd-Gillard period, Xenophon has dismissed the chances of him emerging as the kingmaker in a hung Parliament as a “million to one” possibility.

On that score at least, he’s clearly being no more honest than any other politician.

All the ‘analysis’ assumes a binary, but it isn’t about binary options, it’s about who gets 76 seats. Labor looks highly unlikely, but the independents lean more towards them than LNP. The LNP largely has to get to 76 with no help. If they have to rely on NXT to make up the numbers then the next government will be very different to a standard LNP government, and presumably the natural excesses of the LNP will be curbed, but even moreso that will have to look like a failure for Malcolm, which then leads to a Tony Abbott stalking horse, disruption, right-wing nut jobbery, and with any luck another election in 9 months’ time for Labor to romp home (preferably with Tanya Plibersek as the Leader)

I’m not so sure about that: The starting point for Cathy McGowan and Bob Katter would be to form government with the LNP, lest they want to be the next Tony Windsor and Rob Oakeshott. Malcolm rather that Tony in the PM’s chair would make that far more likely. That implies that 74 would be enough to get LNP across the line.

Agreed that NXT shares more in common with Labor though (c.f. his 5 point plan). The Greens and Wilkie will obviously favour Labor too. If NXT scores most of their seats from LNP then it could be possible that Labor is in the prime position, depending on other results

William…I have not seen any comment from you about a scenario that is all over the Guardian and other blogs.
In the seat of Wentworth…Talcom’s kingdom…the latest Morgan poll out on Monday, has the LNP first preference vote on 41.5% and the same combined Labor/Greens vote on 49%!
Are we about to see another PM lose his seat at a general election??!!

The decision to build submarines in SA has certainly lifted Nick Xenophon’s chances, but if this is contrary to liberal “policy instincts” it shows what a long way Australia has to go to shake off the baneful idea that the economy works “as if” the textbook models were a real representation of how real world economies work. This is illustrated in the AFR again by an economist from the Lowy Institute, Leon Berkelman’s. Leon is appalled that “off the shelf” purchase of submarines for far cheaper prices has been overlooked. He considers a “more sophisticated argument” for building submarines here, which is that it allows us to build expertise here for repair of submarines during periods of military stress. Berkelman attempts to refute this by pointing out that the French think that their designers, instructors and engineers will get huge employment opportunities from the sale. Well, Berkelman is unused to sophisticated argument outside the framework of neo-classical economics, it seems. If you are building submarines as part of a defence force that might actually go to war, then you need more that the ability to repair during times of “military stress”. You might actually have to build submarines to replace ones that are lost in war, when war makes it impossible to buy them off the shelf overseas and safely sail them to Australia or buy parts for repair and safely ship them to Australia. Australia needs the ability to build submarines here and needs facilities that enable that building to occur in times of war. The French rightly think they will design the submarines but design is not the problem that Australia has to have resources ready to hand in times of war. We won’t need French designers, instructors and engineers once the design and how to build the submarines has been settled. We will just need the know how and resources to build them when we cannot reliably get skills and know how from overseas. The Liberals need to change their policy instincts and look at the real world with clear vision rather than through the blinkered, ideological glasses of neo0classical economists, who have risen to provide an ideological rather than scientific defence of neo-classical economics and its supremacy in public policy decisions.