Kohler’s new venture. Veteran business journalist Alan Kohler is starting a new subscription business and investment title, to launch sometime in July. The Constant Investor will operate with a four-person staff from a tiny office in Hawthorn. Kohler has started, and sold, several investment titles in the past. The most well-known were Business Spectator (since absorbed into The […]

The Constant Investor will operate with a four-person staff from a tiny office in Hawthorn.

Kohler has started, and sold, several investment titles in the past. The most well-known were Business Spectator (since absorbed into The Australian‘s general business section) and the subscription investment title Eureka Report — Kohler his co-founders sold both to News Corp for a combined $30 million almost exactly four years ago.

Much of the value of the Business Spectator stable rested in its marquee writers and founders. As part of the sale, Kohler — whose profile extends well beyond finance readers due to his nightly appearances on ABC News — along with his cofounders Robert Gottliebsen and Stephen Bartholomeusz had to remain with News Corp for several years. Kohler’s commitment was for four years and ends at the end of this month.

Kohler has now resigned as an employee of News Corp employee, though he’ll still be around. He told Crikey this morning he’d signed a contract to deliver two columns a week for The Australian. Australian business editor Eric Johnston told Crikey this morning he was “delighted” Kohler would continue to write. “His columns provide powerful insight, credibility and depth,” he said. “Alan is very popular among our readers across our print and digital platforms.” The Australian has big ambitions to take on the Australian Financial Review for Australia’s business readers.

Kohler finishes his commitment with Eureka Report at the end of the month. In March News Corp sold Eureka Report to Australasian Wealth Investments, which also publishes Intelligent Investor along with several other financial titles.

“I’m leaving on good terms,” he said this morning. “It’s still a good product, I’m just moving on. I like starting stuff.”

The Constant Investor will be a weekly title, with macro analysis of economics and business aimed at investors, plus a weekly half-hour podcast. Kohler hasn’t decided on a price for the subscription yet, but he says it won’t be much and will represent “fabulous value”.

Kohler is funding the startup himself — asked if he had investors, he said it was “just me”. Kohler’s nightly gig at the ABC is unaffected. — Myriam Robin

In October last year, Kenny was the first journalist granted access to Nauru in some time, after numerous media organisations had their requests for visas denied. His reporting drew fierce criticism, especially after one of his subjects, the refugee known as “Abyan”, was reportedly upset and went to hospital after his visit.

The complaints raised to the Press Council revolved around the headline on one of the articles (which referred to Abyan as a “rape refugee”) and around the appropriateness and fairness of interviewing her.

According to the adjudication:

“The publication said it was sensitive to Abyan’s situation and accordingly did not divulge her real name, reveal her face or provide her residential address on Nauru. It said in gathering the material for the report, the journalist had visited Abyan’s home and identified himself by name and as a journalist, and explained how the information would be used. The publication said Abyan had clearly consented to the interview and invited the journalist into her home to have the discussion. The publication noted that Abyan has a reasonable command of English, but asked to be accompanied by her roommate to assist in translation and ensure her answers were understood. The publication said Abyan consented to be photographed at that time, provided her face was not shown.”

As to the headline, the Oz itself acknowledged it was “inelegant” and “too blunt” but said it didn’t mean to cause offence and was merely trying to quickly summarise the story.

The council notes in its adjudication that it did not have Abyan’s participation in its process, and so it had “less information” than it would like. Nonetheless, it accepted The Australian‘s claims regarding the article. The reporting was on a matter of “significant public interest”, and material put to the council suggested Kenny did have Abyan’s consent to do the interview, “although determining consent in the context of a person held in offshore detention is difficult”. It noted the Oz didn’t identify Abyan.

On issues of care and sensitivity, the headline was a bit much, but “does not amount to causing substantial offence, distress or prejudice in breach of General Principle 6”.

On Twitter, Australian CEO Nicholas Gray said Kenny was vindicated by the ruling. 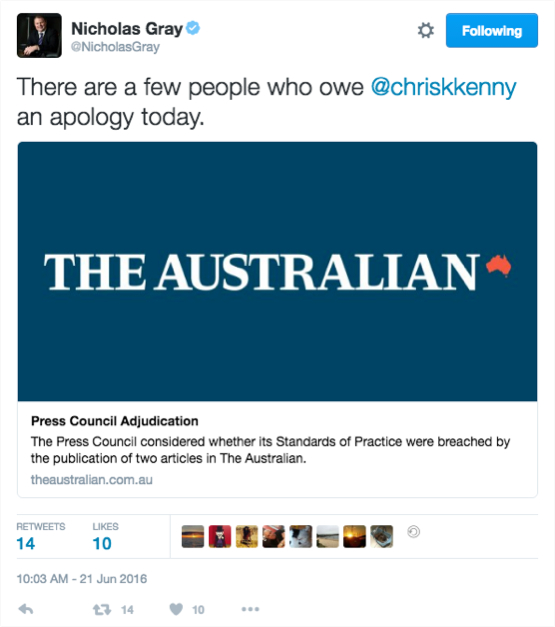 APN quits print. APN has quit its last involvement with print media by agreeing to sell its Australian regional daily and other newspapers to its largest shareholder and partner, News Corp, for what appears to be a knockdown price of $36 million. Journalists fear for their jobs in the merger, which will increase News’ print dominance and give it a print monopoly in some areas.

According to media reports, APN agreed to the fire-sale’ price offered by News Corp of $36 million — 30% less than the price APN had been talking about of $50 million. But as usual News Corp, which owns 14.9% of APN and always had the inside running on the purchase, is sending contradictory messages. It is closing seven community papers in the Leader group in Melbourne at the end of the month. But it is going deeper into print in Queensland by buying APN’s 16 regional dailies (which are based in northern NSW and Queensland) and a host of weekly free and paid papers.

News Corp CEO Robert Thomson had in the past ruled out any further expansion in print (such as buying the Tribune Publishing group in the US), but he has obviously been overruled in this case by the Murdoch clan. The purchase will lift News Corp’s dominance of daily journalism close to 70% and leave Fairfax Media and Seven West Media as the only two independent publishers of note. It’s worth noting, however, that News is considering selling its ailing Sunday Times in Perth to Seven West, which would bring about a monopoly of another kind — Kerry Stokes’ Seven West would own all major print media assets in WA.

The APN titles News will be buying include Mackay’s Daily Mercury (Mackay), Rockhampton’s The Morning Bulletin and The Chronicle in Toowoomba, which are all are housed in APN”s Australian Regional Media unit. Their purchase and will give News Corp a near monopoly of print journalism in Queensland. It already owns The Courier-Mail and Sunday Mail in Brisbane, The Townsville Bulletin, The Gold Coast Bulletin and The Cairns Post. — Glenn Dyer

Photoshop of horrors.Today in photoshop atrocities, the Daily Telegraph has done up three of Australia’s independent politicians as famous serial killers from fiction … 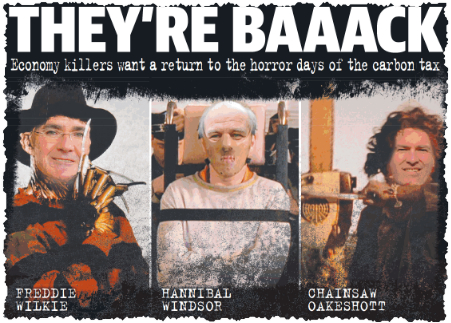 Those who don’t understand history … Last week, the Newspaper Association of America revealed that not even it is immune from the pressures consuming its members. News emerged that the association is shutting the Newspaper National Network at the end of this month. The network was founded in 1994 to sell advertising on behalf of members and is estimated to have sold around US$3 billion in the past 22 years.

At the time of its demise, NNN was owned by 20 newspaper publishers, as well as the association. The reason it failed was that the costs involved were too much for the revenues generated. And there are suggestions that some publishers saw the cost of running NNN as a saving, not an investment, while others wanted to try and grab as much ad revenue as possible for all sources.

And over the weekend, news emerged in London that some of Britain’s biggest newspaper owners were looking at banding together to jointly sell ads. The Financial Times reported:

“The options being explored in conversations between senior Fleet Street executives include creating a single advertising sales operation as the industry faces the biggest crisis since the economic crash of 2008.Talks have so far involved the Telegraph Media Group, Trinity Mirror and Rupert Murdoch’s News UK — owner of The Times, the Sunday Times and The Sun, according to senior newspaper executives.”

Don’t they ever learn, or read? — Glenn Dyer