Labor is clinging to a narrow lead as the election nears, while voters support more direct government intervention to protect jobs, this week's Essential Report shows.

As the July 2 election draws close, Labor is holding onto a narrow two-point lead in today’s Essential Research poll as the Coalition’s primary vote slips a point. 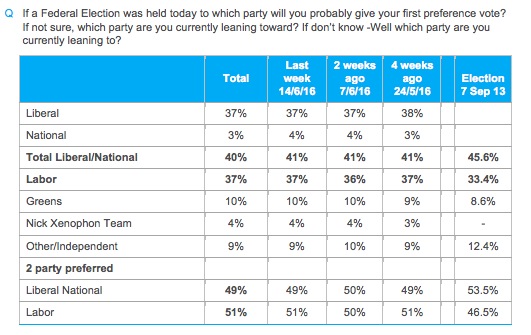 With a third-party vote of nearly one in four voters, the allocation of preferences might end up being crucial in determining whether the Coalition retains office, and whether it does so as a majority government. Preference flows have been difficult to predict in recent state elections, bringing an element of uncertainty even to notionally less marginal seats on either side, where strong performances by minor parties can see unexpected losses. 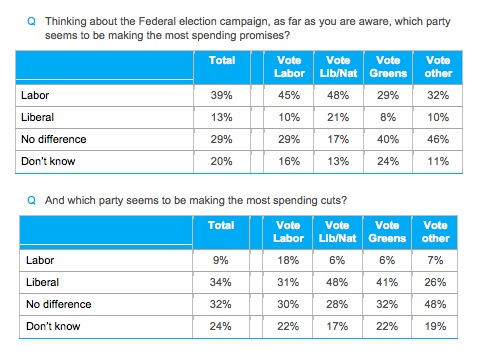 On the vote-influencing issues of jobs, voters are split on who could be trusted to “secure local jobs in your area and nationally”: 28% say the Liberals; 27% say Labor; 3% the Nationals; 4% the Greens; and 3% NXT. And voters are strongly protectionist in how they see the issue: 83% see “local jobs and local content rules for Government funded infrastructure projects” as a way of protecting local jobs, and 80% say “government support for local manufacturing industries like the steel industry” is also important — in the wake of Labor committing $100 million to Arrium and the government responding with a $49 million loan. There’s also strong support — 76% — for investment in renewable energy. However, voters aren’t buying the government’s efforts to argue a massive tax cut for big companies would generate jobs — just 29% of voters say tax cuts for large companies are important for protecting jobs, with just 10% saying they’re “very important”.

And voters are split on one of the issues du jour of last week, whether white settlement constituted invasion — on which both Malcolm Turnbull and Bill Shorten have qualified agreement.

Forty-one per cent of voters disagree with the word “invasion” while 40% agree with it, with voting intention and, particularly, age, correlating with response — older voters, and Coalition voters, are reluctant to agree to the accuracy of the term invasion, while Greens, Labor and younger voters more likely to agree with with it.

Crikey.com.au ‏@crikey_news 19m19 minutes ago
Alan Kohler has resigned from News Corp and is launching a new publication, Constant Investor:

I assume that after collecting untold millions from Newcorpse for Business Spectator, Kohler has worked out his contract and is now free to spend Uncle Rupe’s money. What a heart-warming story.

Can we hope that he’ll bite the hand that fed him?

TGhry came unbidden. They trsmpled over land and people. they trashed agriculture and culture. Then set about massacring as many as thry could. If it wasn’t invasion, what the fuck was it? A friendly visit?

I really cannot see why there is any demurral on this word.