The Federal Labor Senator was relegated to an unwinnable position, but is seeking below the line votes.

Tasmanian Labor Senator Lisa Singh is distributing her own personalised flyers in her home state, asking to “re-elect Lisa Singh to the Senate”. It is highly unusual for a senator to ask to be re-elected in this way, as parties usually campaign for above-the-line votes for the party, with the order of the candidates decided by the party. Singh was relegated to the unwinnable sixth place by the Labor Party in May this year, after being demoted to fourth place last year before a double dissolution election was announced. 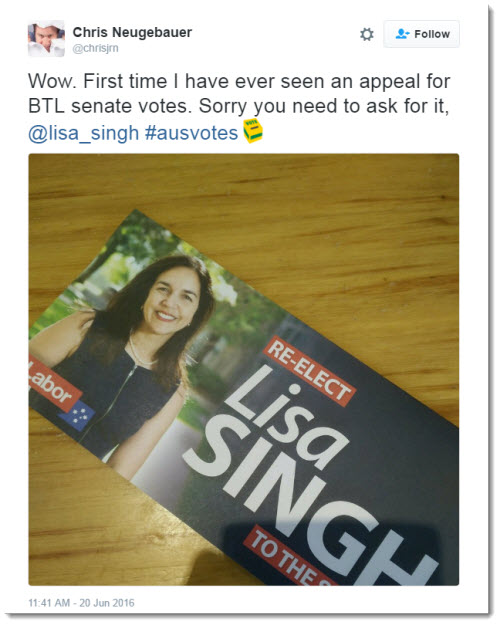 Last year Singh blamed factional deals for her low place on the Senate ballot paper. She is an unaligned member of the Left faction.

The pamphlet details Singh and Labor’s policy positions, including on Medicare, climate change and education. Singh says, “If re-elected to the Senate, I will continue to fight for what makes our Tasmanian community thrive and prosper, where no one is left behind”. 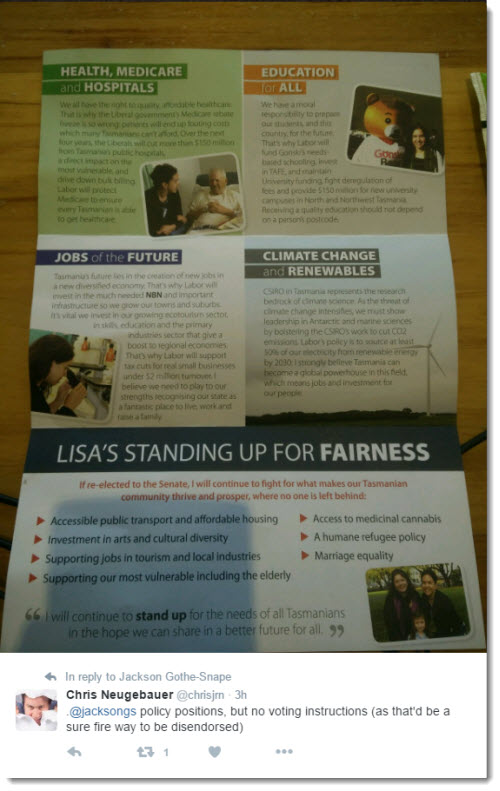 Earlier in the election campaign, Crikey reported that Singh had been increasingly visible in Tasmania during the campaign, with a tipster saying:

“I’ve only seen her signs around, nothing from any other ALP candidates, not even for the lower house candidate for Denison, who has the best chance of beating Wilkie. Nor even general ALP voting signs.”

I am a below-the-line voter and will be giving my no. 1 to Lisa Singh. She’s been a good worker and a faithful party person. The reason for her ‘demotion’? The ALP is really little better than the Libs, moving the left out as much as possible and attempting to appeal to the hyper-conservative right.