A word from the fringe. While Malcolm Turnbull and Bill Shorten will test our bandwidth and our patience tonight in a Facebook debate, last night voters hoping to hear from outside voices braved the cold and turned up at Melbourne’s Kelvin Club to hear a debate of a different kind. The “Alternative Debate”, hosted by the Sex Party and the Equality Party and to be broadcast by LGBTI community broadcaster Joy FM, was set to feature nine of the minor parties from across the political spectrum, but ended up being a chorus of agreement, with just one person singing from a different song sheet.

MC Dean Beck began the night by reading out the list of apologies, which was almost as long as the list of those who actually turned up. Jacqui Lambie had decided to go with her slogan “putting Tasmania first” and hadn’t made it to the mainland. Derryn Hinch had decided not to show up, but could instead be found with Paul Murray on Sky News. Family First’s Peter Madden had found himself up against two gay men and pulled out (his tweets on Monday probably form part of the reason). The Democratic Labour Party’s Clara Geoghegan didn’t seem to have a reason for not showing up, leaving the Australian Christians’ Vickie Janson to fly the conservative flag on her own. She sat in the middle of a panel including the Sex Party’s Meredith Doig, the Liberal Democrats’ Duncan Spender, the Greens’ Jason Ball and the Equality Party’s Jason Tuazon-McCheyne. It went about as well as you’d expect.

On the issue of marriage equality, Janson spoke about being a child of the sexual revolution, and the pain that she has felt from never knowing her biological father. On Safe Schools, she said she was offended by the statement “OMG I’m Queer!” — not the queer bit, but using the word “god” in vain. On issues such as renewable energy and coal, she read from a prepared statement and faced uproar from the crowd. The discussion ranged from offshore detention to Medicare and voluntary euthanasia. At the end, Beck commended Janson for being brave enough to face the crowd, and she was given a round of applause from the same people who had heckled her throughout the hour.

We found Wyatt. Last week we reported that LNP HQ wasn’t very happy with Liberal wunderkind Wyatt Roy, after he decided not to show up to an ABC-hosted candidates’ forum in his electorate of Longman. ReachTel polling in the area on Queensland’s Sunshine Coast shows that Labor’s Susan Lamb has been gaining on the innovation poster boy, so it seems he’s had a change of heart when it comes to candidates’ forums. After a local media campaign by the organisers, Roy turned up to face voters last night, after previously being listed as an apology. We’re told that Roy sat between the Liberty Alliance candidate and the Katter’s Australian Party candidate, and was seen looking at his phone while other candidates spoke. Is the pressure getting to him? The ALP is focusing more resources on the seat, as well as some others in Queensland the party believes could swing Labor’s way on July 2. But that doesn’t necessarily mean that the swing is on in Queensland — the numbers aren’t certain.

Nerd appeal, not sex appeal. Everyone else can give up because we’ve found the best slogan of the election. You can keep your “jobs and growth” and your “putting people first”, because a Greens candidate with no chance of getting elected has stolen our hearts (or is it our minds?). The Greens candidate for the seat of Lindsay, a marginal electorate in Sydney’s west, is Kingsley Liu. Liu has released this billboard, taking aim at the local MP Fiona Scott, who was at the centre of a furore last election when then-prime minister Tony Abbott said voters would be drawn in by her “sex appeal”. It reads “Nerd Appeal not Sex Appeal”. Shut it down, there are no better slogans than this one. 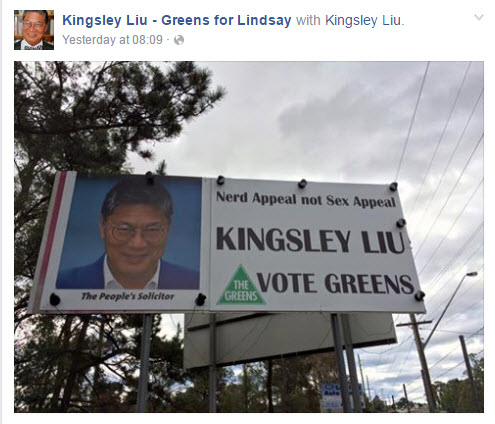 Who missed what at Medibank? The ACCC’s legal action against Medibank Private stands to capture some of the bluest of blue chips from the Australian legal and financial sectors. But how did it get to this? In late 2013, the then Abbott government appointed a high-powered scoping committee to look at the possible privatisation of the health fund. In March 2014, Finance Minister Mathias Cormann held a press conference to announce the results of the scoping inquiry, during which he thanked “… [the] scoping study advisers Lazard, Herbert Smith Freehills, Ernst and Young, the Australian Government Solicitor and Newgate Communications and of course my own Department for their outstanding and professional service as we continue to progress this sale carefully, methodically and purposefully”.

The questions raised by the ACCC action is: did this inquiry do its job? And the same question can be asked of the various financial firms involved in the float. These include joint lead managers Deutsche Bank, Goldman Sachs and Macquarie, co-lead managers Bell Potter Securities, Commonwealth Bank of Australia, Morgans Financial and UBS Wealth Management Australia, and two co-managers: Evans and Partners and Ord Minnett.

One of the ACCC’s allegations goes straight to the float itself. The commission claims:

“Medibank calculated there was a risk that the publicity around the benefit change would damage Medibank’s brand and reputation, and have a negative impact on its planned initial public offering of securities;”

The question for those in the scoping inquiry and managing the float is what steps, if any, did they take to check the information being provided to them by Medibank executives and advisers? Did they seek to check the data with what was in the books of Medibank, or did they accept what they were being told at face value and institute no checks?

The Australian reported in October 2014: “Investment banks, lawyers and accountants working on the government’s $5.5 billion Medibank Private privatisation are set to share in a fee bonanza of more than $26 million, the insurer’s prospectus shows.” Nice money, if you can get it.

Eric Abetz yells at clouds. Self-appointed leader of the conservative element of the Liberal Party, Senator Eric Abetz, has written in this week’s edition of Spectator Australia that he is being silenced by the “left-wing commentariat” when it comes to condemning —–. Throughout the piece he refers to —–, until it becomes clear he means Islam (he says it eventually.) He writes:

“So, why this silence and denial on Muslim radicalism? (There I’ve mentioned it.)

“Just as men wearing white ribbons and being white ribbon ambassadors sends a powerful message to men engaged, or tempted to engage, in domestic violence how powerful would it be if Muslims were to wear a symbol condemning Muslim radicalisation? The grand mufti would be a great start.”

We decided to check on this silence on using the words Islam or Muslim in the media. Isentia tells us that this week, in which a man pledging himself to Islamic State targeted the LGBTI community in America’s worst ever mass shooting, the media was not silent on those words at all.

Yes, lets have more nerds and geeks as candidates. They tend to be more knowledgeable than the knuckle-draggers the major parties foist on us.