Labor makes that hotline bling. The Labor Party (or someone pretending to be the Labor Party) is targeting voters by text message, continuing the claim that the Liberals want to privatise Medicare.

After the party trotted out Bob Hawke for his first ad appearance since he was prime minister, Labor’s campaign around the “secret Liberal plan” to privatise Medicare — which the government denies — has taken a new and invasive turn. 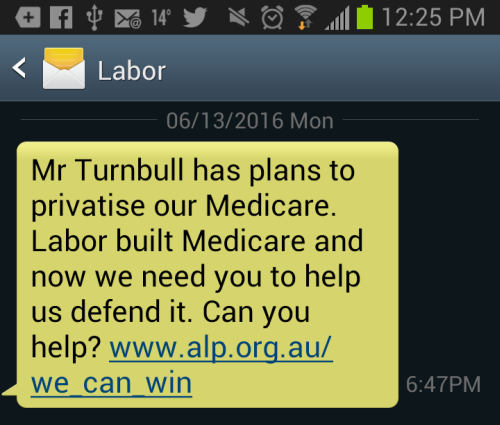 A tipster sent us this text message, received last night, which warns “Mr Turnbull has plans to privatise our Medicare. Labor built Medicare and now we need your help to defend it. Can you help?” This is followed by a link to a webpage where the recipient can make a donation to the party, with no further details on the so-called privatisation of Medicare.

Which is all pretty standard stuff, until you consider the tipster is not a Labor Party member, has never subscribed to the ALP online updates, and has never provided her phone number to the party. Voters are very sensitive to the ways in which political parties use their data and want to know how they are getting this info. The eagle-eyed reader will also note there is no “unsubscribe” option.

Have you received a similar message? Do you know how the ALP has your number? Drop us a line here.

I just called to say… I want your vote. Speaking of the ways the ALP is constantly contacting voters, a tipster tells us he received an official-sounding robocall on Tuesday night, and we’ve got the recording here.

“I assume it’s being targeted at marginal seats as I live in the Lindsay electorate. There is no mention of parties or candidates. In fact, it is designed to sound like it’s coming from the AEC and is simply an explanation of the new voting system. But I was curious about the website it provided people for more information about pre-poll voting: http://www.prepollnsw.com. The website is Labor branded and lists all NSW electorates. Clicking on my electorate, I get a link to a ‘how to vote’ card and then a list of pre-poll locations and opening times.”

Unlike the letters that encourage people to register for postal votes by sending their details to political parties, this doesn’t seem like a data-mining exercise, just a way to get how-to-vote cards in front of early voters.

NBN said call me, maybe? In the kerfuffle around NBN referring leaks to the AFP that resulted in ALP offices being raided last month, there were lots of questions about who knew what when. It took a couple of days, but Communications Minister Mitch Fifield admitted he’d been briefed by NBN about the referral late last year but swears he didn’t tell the Prime Minister or anyone else in cabinet, despite the fact that the NBN had been Malcolm Turnbull’s baby until he took the top job.

At the time, Crikey filed an FOI for any communications between NBN and Turnbull, Fifield, Attorney-General George Brandis or Justice Minister Michael Keenan, just to check whether anyone else had been given a heads up in the meantime.

NBN informs us that the “documents do not exist,” so it seems that if any communications about this investigation were likely done over the phone, rather than email, and the ministers were not sent copies of the referral.

We’re sure there are quite a few FOI requests in on this matter, so there will probably be a few trickling out over the next few weeks as the deadline to respond draws closer.

Signed, sealed, delivered. A tipster in Canberra’s parliamentary triangle returned to his car yesterday to find a flyer from the Secular Party of Australia on the windscreen, which has so many differently sized fonts we’re struggling to get any one message from it: 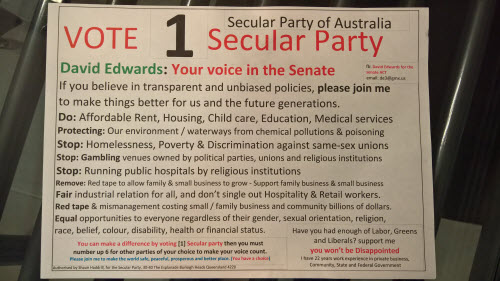 In a post on Facebook, DJ Dan Murphy says that voters in Sydney this week have received the following anti same-sex marriage pamphlet saying that a vote for the Labor Party would be a vote for “radical gay sex education for your children”. The message is also repeated in Greek. It’s authorised by David van Gend of the Australian Marriage Forum. 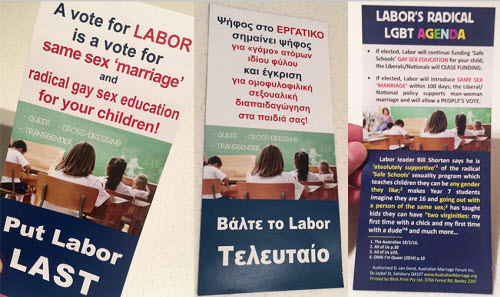 Run the world. In case you haven’t had enough of the election, you now have the chance to hang out with Chloe Shorten. Yes, the ALP is running a competition to meet Bill Shorten’s wife, labelled his “secret weapon” by some pundits. There’s a catch, though — you have to donate to the campaign and then “tell us in a few words why you’re voting Labor. The best entry will be judged by Chloe and will win a backstage pass for the 2016 launch.”

“We’ll provide the transportation for your VIP experience as Labor launches our campaign. You’ll get to meet Chloe backstage, and who knows what other famous guests you could bump into.”

So why is time with the Labor leader’s wife the prize? Would no one donate for time with Bill?

You should also ask the minister for finance about the NBN as he is, along with Fifield, one of the shareholder ministers.

Over the past three decades, since the US Republicans wrote the book on direct mailing, the two major political parties have together amended the Electoral Act to permit themselves greater “participation” in the formal procedures of the electoral system. The Australian Electoral Commission was established (1984) and is funded (meanly) to run federal elections, and it does an excellent job by international standards.
There is no need for political parties to “help” electors to vote, like telling us where and when to vote for example. This information is more reliably and properly provided by the authority responsible, the AEC.
And political parties blanketing electorates with Postal Vote Applications is hugely expensive (we pay in the end) and basically nonsensical (duplicating AEC statutory responsibilities) unless there was a longer-term strategy in mind, like driving the increasing term trend to early voting (with data-mining along the way). History shows postal voting is one of the easiest ways to steal elections….
Australia has a first-rate electoral system, and an independent Electoral Commission, with a raft of legislated integrity checks, in the Parliament (JSCEM), the Judiciary (Court of Disputed Returns) and the Executive (Special Minister of State). We do not need private organisations like political parties intruding into the election process under cover of “helping”. They are not helping, they are serving themselves.
And, unless really unable to attend, we should front up on polling day to the local polling booth and celebrate Democracy Day, the one day political parties have to stand back, stop interfering (OK give me your HTV cards), and let voters have their say.

But the fact is that about 25% of voters do a postal or pre-poll. Why is it so difficult to find, for instance, a Labor HTV for a given electorate? The ALP website does not appear to have them.