Eva Orner challenges the government to respond to her documentary film about asylum seekers.

Chasing Asylum director Eva Orner wasn’t sure she’d make it into Australia to the premiere of her own documentary.

Flying back from a Canadian premiere to Sydney airport, with its Border Force officers in their menacing black uniforms, Orner and her lawyers were ready for anything. Although her groundbreaking documentary on Australia’s offshore detention regime is, as far as Orner is concerned, completely legal, she was aware there might be pushback from the government for the film. It includes interviews with several whistleblowers who worked on Manus Island and Nauru, as well as footage shot inside both detention centres, and interviews with refugees inside the detention centres.

The decision to premiere the film in Canada, rather than Australia, was strategic because lawyers working with Orner on the film were concerned the latter’s government might issue an injunction against the film before it could screen, or there might be criminal proceedings under the Australian Border Force Act, which was passed halfway through the film’s creation, in 2015. By showing it overseas, Orner and her team hoped it would stay the government’s hand. They have so far been successful.

“We had journalists clued up and ready to go if something happened. A lawyer’s job is to let you know the degree of risk, and in this kind of situation there was a lot of risk because of the [Border Force] legislation, which has been untried but exists.”

It’s not just paranoia, Orner says. During the development of the film she found out that the government was aware of what she was doing.

“I was mainly working using encrypted apps — you know the kind of stuff that ISIS uses — the reason was there were things that happened on Nauru and Manus that indicated that people were perhaps aware of what I was saying on emails and on mobile phone calls. Behaviours and protocol changed on Nauru specifically that made my lawyers encourage me very seriously not speak or email about the film on mobile phones or emails and to use encrypted apps.”

“To me, that is horrendous.”

Orner herself never visited Manus or Nauru in the development of the documentary, and, for legal reasons, can’t tell Crikey how the footage was obtained.

“I can’t go there. If I went to Nauru, it costs $8000 [to apply for the visa], I can’t get my money back, and 100% I would not be allowed there. Manus I could go to, but if I go anywhere near the perimeter with a camera, I’d probably get beaten up and my camera would be broken. It’s the hardest film I’ve ever had to make because it’s about places you’re not allowed to go to and people you’re not allowed to speak to.”

The horrific footage shows the conditions asylum seekers face in detention, including children who were in detention, and the hopelessness they feel in not knowing what their fate will be. One of the big motivations for making the film, Orner says, was to show the reality of offshore detention, and remove the abstract political concept and show the human face of the policy. 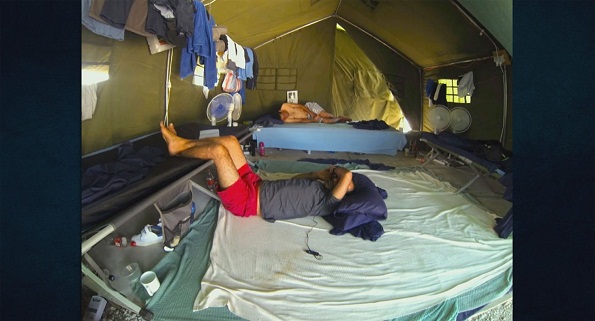 “The government has successfully dehumanised asylum seekers. We’re not allowed to see them — they’re reduced to numbers. They just become this boogiemen. It’s the same with the detention centres. When I decided to make the film, I wondered why people weren’t outraged and horrified, and I think it’s because people can’t see the camps.”

Also featured are several former employees who worked in the detention centre, who could be putting themselves at risk of breaching he Border Force Act‘s secrecy provisions. Orner says as far as she is aware she has done nothing illegal in making the film, but she acknowledges the risk to the whistleblowers.

“We’ve provided them with full legal support. The whistleblowers are the true heroes of this story. They are brave, they are courageous. Without them we wouldn’t know what was happening, and we wouldn’t have this film. We should be celebrating them, and instead they are at times frightened. ”

The government has not yet pushed back, and despite requests to interview the current Prime Minister, Immigration Minister Peter Dutton, former immigration minister Scott Morrison and former PMs including John Howard, Kevin Rudd, Julia Gillard and Tony Abbott, none agreed to appear in the film.

The only time the government has so far responded to the film was when BBC covered the film, and in response to a New York Times op-ed by Roger Cohen. A spokesperson for Dutton told the BBC that “some basic research” would reveal “considerable inaccuracies” in the film. The BBC fact-checked the film and could not find any errors.

“They’re chicken shit. They have not responded to the film,” Orner said. The fact that the government is so sensitive to international reaction indicates to Orner that getting it seen widely outside of Australia could help shame the government over the policy.

“Tens of millions of people are going to see this film in the next six to 12 months. That was one of the objectives of making this film, that obviously I want to show people in Australia what is happening because there is a lot of confusion, but I also wanted to shame Australia internationally.”

Orner says an open invite still stands for Malcolm Turnbull and Bill Shorten to watch the film, but Dutton will have to pay for his own ticket.

A total of 144,000 people saw the film on its opening weekend in Australia last month, and although the film hasn’t received wide distribution in Australia, the screenings have been held in cinemas across the country. Many are now signing up to hold their own Tugg screenings, where people can apply to host their own screening of the film. While it would be expected that Cinema Nova in Carlton would be a very welcoming venue for such a film, through Tugg there are now bookings in places like Geelong, Castle Hill, Toowoomba, and Devonport.

“I feel like people need to get off their arses, go to a cinema, sit in the dark for 90 minutes, not be distracted, not look at their phones, not make a cup of tea. I think the issue deserves some serious thought, and contemplation. I think that’s the power in being in a group of people watching a film,” Orner said.

“The fact that the government is so sensitive to international reaction indicates to Orner that getting it seen widely outside of Australia could help shame the government over the policy.”

I wish Eva Orner well. But if she thinks that Australian politicians can be shamed then I fear she is being overly optimistic. My old Gran used to say that it took grace to be ashamed or embarrassed and I have not seen a fibre of grace in any politician for some decades. They will just wait it out and when the memory fades they will go on in the same way. Refugees have been demonised to the electorate and their “de-demonisation”, if ever thought to be desirable, would also take decades of careful public education.

‘The decision to premiere the film in Canada, rather than Australia, was strategic because lawyers working with Orner on the film were concerned the latter’s government might issue an injunction against the film before it could screen…’

I guarantee this isn’t the Australia for which our forebears risked their lives in two world wars.

I can safely say my grand pa who put his age down to join up and fight in WW11 didn’t spend 6 years in the piss, the shit and the trenches and as a POW so we could build vicious concentration camps for victims of war.

The current crop from the Lib/Lab duopoly would probably welcome being excoriated by the film as the lumpen to whom they grovel would regard it as being garlanded with roses.