Will Trump boycott Crikey eventually? And other media tidbits of the day.

Commies and environmentalists. The most avid readers of political analysis in Australia are most likely to vote for the Greens, according to the cumulative results of a survey question Roy Morgan has been asking for three years.

From October 2013 to March 2016, Roy Morgan asked over 100,000 electors what type of content they liked at different times of the day.
The results suggest the more left-wing someone votes, the more likely they are to have been consuming political analysis. Though the differences aren’t great — most voters of all stripes don’t nominate it as something they like to read at all, with the exception of those in some highly engaged inner-city electorates.

Meanwhile, only 7% of polled electors in Forde (in Queensland), Wakefield (South Australia) and Werriwa (New South Wales) said they wanted political analysis once a day. (The full list of most and least engaged electorates is in the press release.)

The CEO of Roy Morgan Research, Michelle Levine, noted in the statement that there isn’t really a correlation between how tightly a seat is contested and how interested its residents are in reading about politics.

“Many of the voters who are most likely to be interested in accessing Political Analysis are in safe seats. But while 24% of electors in ever-marginal Eden-Monaro — often the subject of intense scrutiny in Federal Elections — want some Political Analysis in their media, voters in a number of other marginal seats that changed hands in 2013 –including Petrie, Lyons, Capricornia, Dobell, Reid, Page and Braddon — are less likely than average to cite it as a content preference.”

Cut & Paste unmasked! Months after a subbing error revealed that the keeper of the snark was none other than Christian Kerr, it’s happened again. 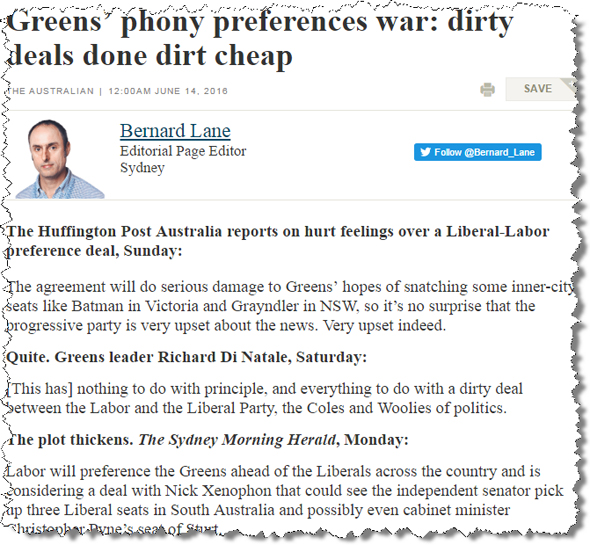 Bernard Lane now has the thankless task of finding 20-year-old press clippings, to show that someone who says they didn’t say a thing, actually said a thing. A pity, because C&P relies for its effect on anonymity. Without that, it’s just cheap gotchas from whichever journo drew the short straw. Courage, Bernard! We will read the product of your humiliating drudgery with deep sympathy. — Guy Rundle

Trump’s expanding black list. Donnie Trump is managing to build up a nice pool of media organisations he doesn’t like, and so bans. On Monday, he added The Washington Post to his “no-go” list. His decision means the Post, owned by Amazon boss, Jeff Bezos, (another object of Trumpian ire) joins the likes of Megyn Kelly from Fox News (temporary), a reporter from the website Politico, a New York Times reporter or two, BuzzFeed, the National Review, The Des Moines Register, Univision, the Daily Beast and Huffington Post and the magazine Mother Jones, on his banned list. That’s a badge of honour.

In a statement issued on Monday, Trump’s organisation said:

“The Washington Post unfortunately covers Mr. Trump very inaccurately. Today’s headline, ‘Donald Trump Suggests President Obama Was Involved With Orlando Shooting’ is a perfect example. We no longer feel compelled to work with a publication which has put its need for ‘clicks’ above journalistic integrity.

“They have no journalistic integrity and write falsely about Mr. Trump. Mr. Trump does not mind a bad story, but it has to be honest. The fact is, The Washington Post is being used by the owners of Amazon as their political lobbyist so that they don’t have to pay taxes and don’t get sued for monopolistic tendencies that have led to the destruction of department stores and the retail industry.”

“Donald Trump’s decision to revoke The Washington Post’s press credentials is nothing less than a repudiation of the role of a free and independent press. When coverage doesn’t correspond to what the candidate wants it to be, then a news organization is banished. The Post will continue to cover Donald Trump as it has all along — honorably, honestly, accurately, energetically, and unflinchingly. We’re proud of our coverage, and we’re going to keep at it.”

The Washington Post has assigned a team of 20 reporters to produce a book about Trump that is scheduled to be released later this year. The paper and website last week published a critical examination of Trump’s stewardship of Trump Casinos 20 years ago which turned out to be a loss maker for shareholders, but a nice little earner for the big mouth. — Glenn Dyer

What a pair! The Sun, mouthpiece of the Murdoch clan in Britain and Ambrose Pritchard Evans, the international business editor of The Telegraph — a man who has flagged more financial crises than any other writer in Britain — now both are supporting the campaign for Britain to leave the EU.

The Sun revealed its decision in a front-page banner splash this morning headlined “BeLEAVE in Britain”. A strapline on the website sums up Murdoch’s case:

“Why voting to leave the EU will save our sovereignty, rein in migration and boost our economy …

THIS is our last chance to remove ourselves from the undemocratic Brussels machine … and it’s time to take it.”

(Ignoring the fact that as the News of the World phone hacking case showed, the Murdoch media empire saw itself as being above the rule of law in Britain anyway.)

The Murdoch-owned tabloid declared that remaining in the EU would be “worse for immigration, worse for jobs, worse for wages and worse for our way of life”.

This is the party line from Rupert Murdoch who has made clear his opposition to the EU (and the UK Prime Minister, David Cameron) for years.

Meanwhile, in an article in The Telegraph this morning, Evans writes:

“With sadness and tortured by doubts, I will cast my vote as an ordinary citizen for withdrawal from the European Union.

“Let there be no illusion about the trauma of Brexit. Anyone who claims that Britain can lightly disengage after 43 years enmeshed in EU affairs is a dreamer, with little grasp of global finance and geopolitics.

“Stripped of distractions, it comes down to an elemental choice: whether to restore the full self-government of this nation, or continue living under a higher supranational regime, ruled by a European Council that the British people do not elect and can never remove, even when it persists in error.”

Video of the day. If you ever wanted to see the Devil on the set of Playschool, you’re in luck … 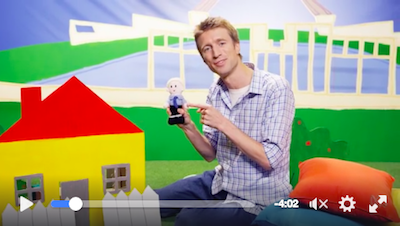 I adore Playschool – it is THE best English language teaching program for pre-schoolers and their slightly older sisters and brothers.

Enjoyed this version too. Absolutely captured both the election and Playschool. Thanks for that.

Ambrose E-P is one of the more swivel eyed & foam flecked of the torygraph’s writers, even more of a rightard than the pitiful Con Coughlin.