Who really opposes the superannuation changes? Not Liberals.

New polling shows that, far from being up in arms about the government's superannuation tax changes, Liberal voters are their biggest supporters.

Who actually opposes the government’s retrospective superannuation tax changes and caps on transition to retirement contributions?

We know that Labor opposes the retrospective element of the cap on after-tax contributions, while the Institute of Public Affairs has been a vocal critic. Last week a group of rich lawyers launched a campaign hilariously called “Save Our Super” against the changes. There’s also been much discussion of how it’s the Liberal Party base that is unhappy with the changes, driving backbenchers to push back on the changes.

But today’s Essential Report has some numbers that undermine the assumption that Liberal voters are furious with the changes. Overall, voters support the changes 47% to 22%. But it’s Liberal voters who are the strongest in support of the changes, 57% to 20%. Greens and Labor voters are a little less enthusiastic, 50-52% support to 22-24% opposition. 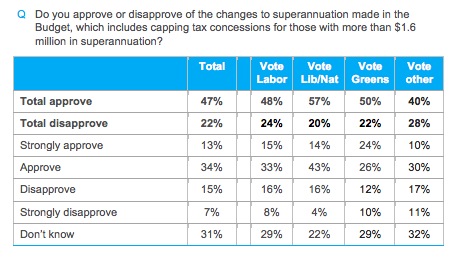 It gets more interesting when you split responses according to their superannuation status. Voters who make after-tax contributions to their super — i.e. the very people most likely to be affected by the government’s tax changes, are the most supportive of all. They approve 60% to 28%; that is, their level of opposition is higher than everyone else, but so is their level of support (they also have a very low “don’t know” response).

This sample size is a small one, so let’s not overburden the result with significance given the large margin of error. But the fact that those most likely to be adversely affected by the changes are in net terms at least no different to other groups (if you assume the result overstates support) sits poorly with the idea that the government’s proposed changes have sent angry rich Liberals to the barricades. And perhaps even more so than usual, the IPA is out of touch with mainstream opinion.

The survey got the answers it wanted by selecting the wrong groups of people for questioning. It should have surveyed rich donors to the Liberal Party. Ask Arfur Seenodonors, he should know who to ask.