Isentia Index: Hang on, it turns out the climate may be changing? Well I never

Election fatigue has truly set in.

As Australia’s political leaders have the conversations in the middle of an election campaign in 2016 that should have been settled in a bipartisan fashion decades ago, most of the electors are still not paying any attention, and that’s probably not just a passing phase. With both leaders in WA — which looks like it might be the most competitive state this election — Foreign Minister Julie Bishop was getting plenty of coverage as she launched her campaign and followed PM Malcolm Turnbull around, although her numbers, like everyone else, were a long way behind Turnbull and Shorten.

Shadow Treasurer Chris Bowen has been out and about trying to sell Labor’s fiscal rectitude, despite all evidence to the contrary, and must already be having nightmares about his less rapid contractions. You’d love to be a fly in the wall in the strategy meetings where they come up with these phrases, amid all that continuity and change. We just need to remember, to a politician with something difficult to sell, a spade will always be a multi-purpose earth displacement device. 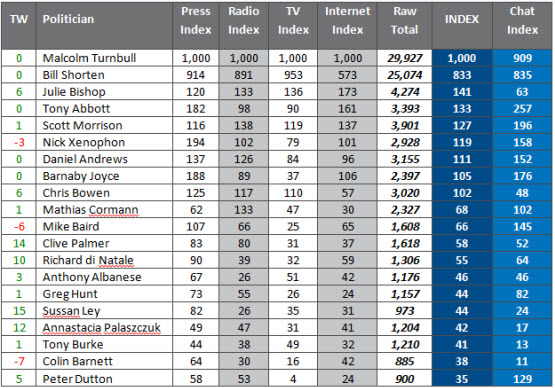 Opposition Leader Bill Shorten ahead this week on social media after a string of policy announcements and the call for a treaty.

Back to pretty mediocre numbers on talkback, as the main election issues of the week really didn’t get many fired up, apart from a small increase in ‘a pox on both their houses’ calls about government debt.

And he’s not exactly a household name in Australia, but the star of the hit Broadway musical Hamilton summed up many people’s feelings about the Orlando shootings in his Tony acceptance speech.