Essential: Labor back in the lead, as Shorten strengthens

Labor is back with a narrow lead in this week's Essential poll, while evidence mounts that Labor is having an effective campaign in the eyes of voters. 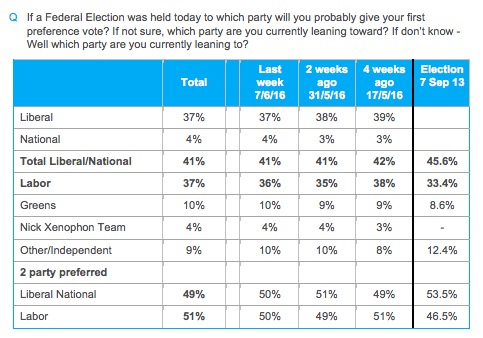 Recent shifts are all within the margin of error of the poll. However, there’s more evidence Labor is having a better campaign than the Coalition. After a small recovery in his polling numbers a fortnight ago, the Prime Minister is again in negative territory: 38% of voters approve of his performance and 40% disapprove, compared to 41%/39% at the end of May. Bill Shorten, however, has his best set of numbers in more than a year, with 34% approving of his performance and 40% disapproving (just before winning in September 2013, Tony Abbott’s numbers were 40% approval and 49% disapproval). At the end of May, Shorten’s disapproval rating was 44%. Turnbull retains a strong lead as preferred prime minister, but that is now down to 11 points, from 13 points a fortnight ago. In November, Turnbull led Shorten by 41 points.

The campaign has also had a noticeable effect on voter perceptions of parties since March. The perception that Labor “looks after the interests of working people” is held by 56% of voters, up six points since March; that Labor is “moderate” up seven points to 54%; “understands the problems facing Australia” up six points; “has a vision for the future” up eight points, as is “has good policies”; while “out of touch” is down seven; “has a good team of leaders” is up nine (only to 39% though). 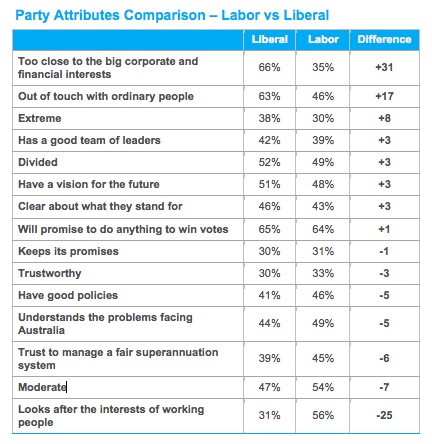 Overall, Labor has a lead on a number of key attributes (bear in mind this is just a small set of attributes that have been polled). The Coalition is far ahead of Labor on being close to the big end of town and being out of touch; Labor leads by five on “good policies” and “understands the problems facing Australia”, has a big lead on “moderate” and the sort of lead you’d expect on “looks after the interests of working people”.

All this suggests that both sides have clarified their messages during the campaign as well as concentrated hard on appearing united — both sides recorded drops on “divided”, especially the government, down nine points. But in that clarification process, the Coalition has strengthened voter perceptions it is more allied with business than with voters’ interests, while Labor has strengthened perceptions it is in touch with voters. Labor has also improved voters’ perceptions of its policies, while the Coalition has marked time on that front.

Why hasn’t this translated into more votes for Labor? There’s still the issue of Malcolm Turnbull’s strong lead as preferred prime minister over Bill Shorten, however extended the slide in that lead has been. But it might also be that while voters feel Labor is more in touch with their concerns, they still have mixed feelings about Labor’s capacity to implement its good ideas, or that voters have been partly convinced that the interests of big business are linked to those of the economy.

Finally, nearly a quarter of voters say that they intend to vote early: 23% say they will vote pre-poll, while 64% say they’ll wait til July 2, and 13% aren’t sure. Liberal voters are the ones most likely to go early, with 28% saying they’ll vote pre-poll. And it’s Greens voters who are most likely to show up on polling day. Perhaps it’s the lure of the election-day sausage sizzle — or maybe the BBQed tofu and vegan mudcake at the cake stall.

Jobsen Grothe also seems to have memory loss re the 16,000 casualties in the arts during the past year.

I suspect that more voters are not convinced to vote Labor is partly to do with media commentary, and this includes you Bernard.

I suspect there will come the day when this question is junked, because it is;
A) The wrong question
B) Has much less influence over the outcome than it is given credit for.